The Salme ships are two clinker-built ships of Scandinavian origin discovered 2008 and 2010 near Salme village on the island of Saaremaa, Estonia. Both ships were used for ship burials here around AD 700-750 in the Nordic Iron Age and contained the remains of more than 40 warriors killed in battle, as well as numerous weapons and other artifacts. 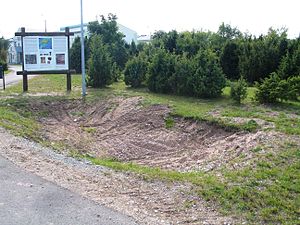 The site of one of the excavated Salme ships.

Both Salme ships are clinker-built and archaeologists has estimated their time of construction to be AD 650-700 in Scandinavia. There are signs indicating they have been repaired and patched for decades, before making the final voyage. One of the ships is 11.5 m long and 2 m wide, the second one more than 17 m long and 3 m wide. None of them had mast or sails, and they would have been rowed for short distances along the Baltic coast, or between islands in order to reach their destinations.[2]

Skeletal remains from at least 42 individuals were discovered in the two ships.[3] Most of them belonged to 30–40 years old males who had been killed in battle.[4][5] The smaller ship contained the skeletal remains of 7 individuals. There were at least 36 individuals buried in four layers in the large ship.[6] 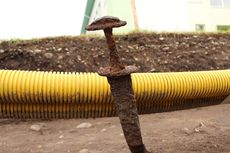 A sword from the 8th century ship burial in Salme on the island of Saaremaa.

Fragments of more than 40 swords of various types, remains of shields, spearheads and dozens of arrowheads were found in the burial. Most of them had been deliberately deformed, perhaps to discourage grave robbery.

Smaller objects included one small socketed axe, knives, whetstones, a bone comb with ornaments, a bear-claw necklace, and hundreds of gaming pieces made of whale bone and antler with six dice.

The skeletal remains of two ritually sacrificed dogs as well as hawks used for falconry were found in the burial.

According to an early interpretation offered by Jüri Peets, the lead archaeologist at the site, the ships and the dead are of Scandinavian origin. According to the most likely scenario, a war party of Scandinavians attempted to carry out a raid against the Oeselians (Estonian inhabitants of the island of Saaremaa), but were attacked by Oeselian ships. The sides of the two ships contain numerous embedded arrowheads, some of which are of the three-pointed type used to carry burning materials to set enemy ships aflame. After losing too many oarsmen to the Estonian archers, the raiders pulled their ships aground and tried to defend themselves behind them. It appears that after the battle, the Oeselians allowed either the survivors or some other group of Scandinavians to ritually bury their dead. The burial is unusual because the ships were not covered with earth mounds. The site was eventually forgotten by the local inhabitants after it had become overblown by sand and covered with vegetation.[7] The raid-hypothesis has led to a questioning of when the Viking Age began exactly. The Salme event took place 50-100 years earlier than the infamous Lindisfarne Viking raid in England in the summer of AD 793.[8]

The original interpretation was called into question after the second, larger, ship was uncovered. It is likely that the human remains in it belonged to individuals of noble birth, as evidenced by the large number of expensive bronze sword-hilts and the complete lack of weaponry associated with commoners. The presence of dogs and hawks used for falconry indicates that the original purpose of the trip to Estonia may have been leisure or diplomacy.[9]

Snorri Sturluson relates in his Ynglinga saga that the Swedish king Ingvar, Östen's son, was a great warrior who often spent time patrolling the shores of his kingdom fighting Danes and Estonian Vikings (Víkingr frá Esthland). King Ingvar finally came to a peace agreement with the Danes and could take care of the Estonian Vikings. He consequently started pillaging in Estonia in retribution, and one summer he arrived at a place called Stein (see also Sveigder). The Estonians (sýslu kind) assembled a great army in the interior and attacked King Ingvar in a great battle. The Estonian forces were too powerful and Ingvar fell and the Swedish forces retreated. Ingvar was buried in a mound at a place called Stone or Hill fort (at Steini) on the shores of Estonia (Aðalsýsla).