From Infogalactic: the planetary knowledge core
(Redirected from Salmesbury)
Jump to: navigation, search

Samlesbury /ˈsɑːmzbᵊri/ is a village and civil parish in the borough of South Ribble in Lancashire, England. Samlesbury Hall, a historic house, is located in the village as is Samlesbury Aerodrome. The village is also home to a large modern brewery owned by Anheuser-Busch InBev.

The village's name is derived from the Old English sceamol, meaning ledge and burh meaning fortification, hence literally "ledge fortification".[1] It may also be that the name at least partly derives from the Roman name for the River Ribble and its eponymous Celtic deity, Belisama.[2]

In the 13th and 14th centuries there was fortified house near the river, probably a stone tower, held ny the Denyas family. It was destroyed by the Scots in one of their raids, possibly the Great Raid of 1322. A family heiress, Alicia Denyas, married Gilbert de Southworth, builder of Samlesbury Hall.[3]

The parish was part of Preston Rural District throughout its existence from 1894 to 1974.[4] In 1974 the parish became part of South Ribble. 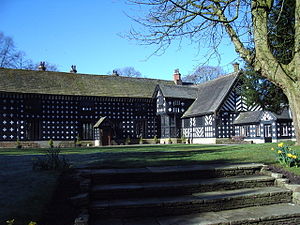 Samlesbury Hall is a manor house built in 1325 which has been many things since then including a public house and girls' boarding school, but since 1925, when it was saved from being demolished for its timber, it has been administered by a registered charitable trust, the Samlesbury Hall Trust. This Grade I listed medieval manor house attracts over 50,000 visitors each year. 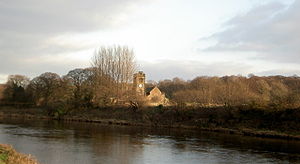 Samlesbury parish church, like the one at nearby Walton-le-Dale, is dedicated to St. Leonard the Less and was founded in 1096. The church contains a Norman tub font, a medieval bell and Sir Thomas Southworth's funerary armour dating from 1546. It also has a church chest, a two-decker pulpit and a complete set of box pews dating from the 17th and 18th centuries.

The Roman Catholic church is St Mary and St John Southworth. There was previously also a Wesleyan Methodist chapel.

Samlesbury benefits from having its own primary school called Samlesbury Church of England Primary School. The school is located beside the Church of St Leonard the Less, on the banks of the River Ribble.[5]

The Samlesbury witches—Jane Southworth, Jennet Brierley and Ellen Brierley—were accused of child murder and cannibalism and tried at Lancaster Assizes on 19 August 1612, in the same series of trials as the Pendle witches. All three were found not guilty in a trial which one historian has described as "largely a piece of anti-Catholic propaganda".[6]

Samlesbury brewery is a large modern brewery belonging to InBev. It was completed in 1972 to brew Heineken lager for Whitbread. It produces Boddington's Bitter, and bottled and keg Bass Pale Ale for export.[7]

Samlesbury Engineering was a subsidiary of the Lancashire Aircraft Corporation at Warton which was chaired by Sir Wavell Wakefield, later Lord Wakefield of Kendal. The company specialised in bus manufacturing but was capable of high quality engineering.

Their workshop, where the ill-fated Bluebird K7 was designed and built, was on the car park behind Samlesbury Hall. Bluebird K7 was the turbo jet-engined hydroplane in which Donald Campbell set seven world water speed records during the 1950s and in which he was killed on Coniston Water in 1967.[8]

The Lancashire Aircraft Corporation, together with Samlesbury Engineering, eventually became part of what is now BAE Systems, which today has a facility at BAE Samlesbury.