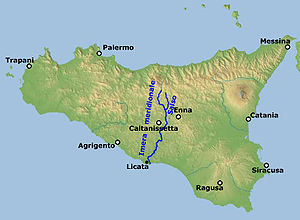 The River Salso (Sicilian: Salsu),[1] also known as the Imera Meridionale (Greek: Ἱμέρας; Latin Himera), is a river of Sicily. It rises in the Madonie Mountains (Latin: Nebrodes Mons; Sicilian: Munti Madunìi) and, traversing the provinces of Enna and Caltanissetta, flows into the Mediterranean at the western end of the Gulf of Gela at the seaport of Licata, in the Province of Agrigento. Its small deltaic system there is dominated by marine processes rather than fluvial ones. It is a seasonal torrent, with brief but violent floods during the winter rains (from November to February), and all but dry in summer droughts. In November 1915 the iron bridge across the river's mouth collapsed during floods, and 119 people were swept away in the flood and lost.[2] The Salso, which is the longest river of Sicily at 144 kilometres (89 mi), has a drainage basin area of about 2,122 square kilometres (819 sq mi).

The river's historically changeable meanders across the low coastal plain have been artificially channeled into the Canale di Sicilia, and the marshes drained for agriculture. Until the late nineteenth century it had two distributory channels, the second debouching 5 kilometres (3 mi) to the west. The mouth of the Salso has been advancing during historical times, and wind and wave formerly distributed its sand and silt to the beaches of the Gulf of Gela.[2]

Himera was the ancient name of two rivers in Sicily, the Grande flowing to the north into the Tyrrhenian Sea, and the Salso to the south coast of the island, but which, by a strange confusion, were regarded by many ancient writers as one and the same river, which is in consequence described as rising in the center of the island, and flowing in two different directions, so as completely to divide Sicily into two parts. It is singular that, if we may believe Vibius Sequester, this absurd notion is as old as the time of Stesichorus, who was himself a native of the city of Himera. Mela is, however, the only one of the ancient geographers who adopts it.[3]

The Salso enters the sea at Licata (the ancient Phintias). In the upper part of its course it is composed of two branches, running nearly parallel with one another; the one now called the Fiume Grande rising near Gangi, the other, called the Fiume di Petralia, from the town of the same name: it is only after the junction of the two that it obtains the name of Salso. It is impossible to say which of the two branches was regarded by the ancients as the true Himera; but in either case that river has a course of above 90 kilometres (56 mi) from north to south, and its sources are not above 24 kilometres (15 mi) from the north coast of the island. Hence the expression of Polybius and Livy, that the Himera nearly divides the whole of Sicily into two parts, is by no means inaccurate.[4] But it is evidently this circumstance, coupled with the fact that there was another river of the same name flowing into the Tyrrhenian Sea, which gave rise to the fable above noticed. Strabo, who does not notice the southern Himera, applies (evidently by mistake) very nearly the same words as Polybius to the northern river of the name. (Strab. vi. p. 266.) Diodorus notices the brackish quality of the waters of the Himera, which gives rise to its modern name of Fiume Salso: this is caused by the junction of a small stream near Caltanisetta, that flows from the salt mines in that vicinity.[5] Solinus erroneously ascribes this quality to the northern Himera;[6] while Vitruvius rightly attributes it to the southern river only.[7]

Historically, the southern Himera is remarkable for the great battle fought on its banks between Agathocles and the Carthaginians, in which the latter obtained a complete victory, 311 BCE.[8] The scene of this action was a short distance from the mouth of the river, the Carthaginians occupying the hill of Ecnomus, while Agathocles was encamped on the left bank. At a much earlier period, 446 BCE, it witnessed a defeat of the Agrigentines by the Syracusans;[9] and, again, in the Second Punic War, 212 BCE, became the scene of an action between Marcellus and the Carthaginian forces under Hanno and Epicydes of Syracuse, in which the latter were defeated and driven to take shelter within the walls of Agrigentum (modern Agrigento).[10] By the treaty concluded with Carthage by Hieronymus of Syracuse, it was agreed to divide the whole of Sicily between the two powers, so that the river Himera (Salso) should be the boundary of their respective dominions.[11] But this arrangement was never actually carried into effect. Ptolemy correctly places the mouth of the southern Himera to the east of the emporium of Agrigentum;[12] he is the only one of the geographers who mentions both rivers of the name. An inscription containing a dedication "ΑΣΚΑΗΠΙΩ KAI IMEPA ΠΟΤΑΜΩ", must, from its being found at Caltanisetta, refer to the southern Himera (i.e., the Salso).[13]

The Salso was of importance in antiquity because, according to Diodorus Siculus[14] after a series of conflicts between the Siculi and the Sicani, the River Salso was declared the boundary between their respective territories, the Siculi dwelling to its east, the Sicani to its west.[2]

The name Salso is also given to a tributary of the Simeto, the most important river of Sicily.