From Infogalactic: the planetary knowledge core
Jump to: navigation, search
For other uses, see Salt and pepper (disambiguation).

HIDDEN ERROR: Usage of "imagesize" is not recognized

The group entered the music industry at a time when hip hop music was believed to be a fad and major record companies were reluctant to sign hip hop artists.[5] Many early hip hop artists recorded for independent labels. Originally calling themselves Super Nature (on their first single), James and Denton debuted in 1985 with the single "The Showstopper", an answer record to Doug E. Fresh's hit single "The Show".[2] "The Showstopper" was produced by Hurby Azor. The song utilized a melody from the 1984 film Revenge of the Nerds. The finished recording garnered some airplay on a New York City rap radio program. The independent Pop Art Records gave it an official release, and "The Showstopper" became a modest R&B hit.[2] Salt-N-Pepa made their impact on hip-hop by being the first all women rap group. With lots of concerns about sexist lyrics and video clips that objectified women's bodies in hip hop music, many feminists disliked rap and hip-hop music because of its bad portrayal of women. However, Salt-N-Pepa changed the look of hip hop. They wore scantily clad, sexy clothing and were not afraid to talk about sex and their thoughts about men. Their song "Let's Talk About Sex" was a huge hit.[6]

With the success of Showstopper, the group's name was changed to Salt-N-Pepa (which they had called themselves in the first verse of the song) and they signed to the independent Next Plateau Records to record a full-length album.[2] Roper then joined the group as the DJ, replacing DJ Latoya Hanson as Spinderella,[7][8][9] and the group's first album Hot, Cool & Vicious was released afterwards in 1986. The album was produced by Hurby "Luv Bug" Azor, Salt's boyfriend at the time and also the group's manager.[2] Years later, the women would have legal issues with Azor as they accused him of paying unfair royalties. Hot, Cool & Vicious provided some moderate R&B hits with the singles "My Mic Sound Nice", "Tramp", and "Chick On The Side". But when San Francisco DJ and producer Cameron Paul created a remix to "Push It", the B-side of the "Tramp" single, it gave the group their first major hit.[2] "Push It" (US #19, UK #2) became a platinum single in the United States, and a hit in several other countries, and was added to subsequent pressings of Hot, Cool & Vicious. It was nominated for a Grammy Award, and the strength of that single catapulted the album to platinum sales in the US with one million sold, making Denton, James, and Roper the first female rap act (group or solo) to go gold or platinum.[citation needed] The album ultimately sold 1.4 million copies worldwide.[citation needed]

Salt-N-Pepa's next album release, 1988's A Salt with a Deadly Pepa, contained the Top Ten R&B hit "Shake Your Thang", featuring the go-go band E.U. A top 20 R&B hit and a minor pop hit were seen in "Get Up Everybody (Get Up)" and "Twist and Shout", respectively; with "Twist and Shout" becoming a major hit in the UK (#4),[10] and several other European countries. The album sold about 800,000 copies worldwide with roughly 600,000 of those in the US, attaining gold status.[citation needed]

The group's third album Blacks' Magic was released in March 1990, and was a personal album for the trio on many fronts. Pepa would become the first group member to become pregnant. Azor would produce some songs on the album, but often late or a no show to recording sessions, as he was producing other acts, he agreed to let the artists work with different producers to finish the album. James and Roper took on producing assignments themselves and the trio also hired different producers such as Invincible's producer Dana Mozie. This was the first album to feature Roper on vocals as well as DJ'ing. The result was six singles released by Next Plateau Records, several of which became hits: "Expression" (US #26, UK #40 in 1990, UK #23 in 1992), a platinum single that had been certified gold before it even cracked the US Hot 100 as it had already been #1 on the R&B Chart for 8 weeks, and produced by Salt; "Independent"; "I Don't Know" (featuring Kid N Play); "Do You Want Me" (US #21, UK #5), certified gold; "Let's Talk About Sex" (US #13, UK #2), certified gold, and later re-recorded as "Let's Talk About Aids"; and "You Showed Me" (UK #15). The album ultimately sold 1.6 million copies worldwide with a million of those sold in the US.[citation needed] A greatest hits album called A Blitz of Salt-N-Pepa Hits, featuring some remixed versions of songs from the group's first three albums was subsequently released.

Salt-N-Pepa's fourth studio album Very Necessary was released in October 1993 on London Records/Polygram.[10] The album featured songwriting and production by Salt, Pepa, Spinderella, and Azor. Buoyed by the hits "Shoop" (US #4, UK #13), co-produced by Pepa; "Whatta Man" (US #3, UK #7) (featuring En Vogue); and "None of Your Business", a Top 40 US hit and a Top 20 UK hit, the album eventually sold seven million worldwide, with five million of those in the US (5x platinum), making them the first female rap act (solo or group) to have a multi-platinum selling album. The group toured and Salt went on to co-star in the motion picture comedy Who's the Man?. Pepa co-starred in the movie Joe's Apartment. Pepa had also been romantically involved with Treach of the rap group Naughty By Nature. The trio won the Grammy Award for Best Rap Performance in 1995 for the single "None of Your Business", making them the first female rap Grammy winners. The album is the best selling album by a female rap act.[citation needed]

By the time of their next album release, Salt-N-Pepa had gone through the legal process of completely breaking away from Azor, whom they accused of unfair royalty payments. Salt had already stopped being romantically involved with him due to their many ups-and-downs. The trio also left London Records after one album and signed with Red Ant Records, though still distributed by Polygram Records through its Island Records label. Red Ant offered the trio a $15 million signing bonus to sign with them. The group undertook production duties once again, but without Azor involved in any part of the album. The result was their fifth album, Brand New (1997), which hit stores a few months later. However, Red Ant filed for bankruptcy soon afterwards, halting promotion on all its releases, including Salt-N-Pepa's album. The group toured in support of the album, but without any promotion or marketing from the now-defunct Red Ant, they only scored minor hits with "R U Ready" and "Gitty Up". The album was certified gold in the US for sales of over 500,000 and sold approximately another 200,000 worldwide. Although not as big a seller as its predecessor, it kept intact an unbroken string of platinum and gold studio albums by the trio.

In March 1999, Salt-N-Pepa embarked on a tour. Pepa married Treach of Naughty by Nature on July 27. Salt-N-Pepa's greatest-hits album, entitled The Best of Salt-N-Pepa, was released in Europe on January 25, 2000. Pepa and Treach would remain married for two years but their tumultuous marriage would end in divorce on July 31, 2001. With no albums contractually due at the time, Salt decided to quit the group, stating she had enough of the music industry and no longer wanted to be involved in it. They officially disbanded in 2002. Some time later, Salt announced that she would be releasing her first solo album, but subsequently did not release the album. She was featured on the remix version of the Salt City Six's "Shine", on the album Holy South: World Wide, a compilation of Christian rap and Christian R&P (Rhythm & Praise) songs. The album was executive produced by ex-Three 6 Mafia member turned Christian rapper Mr. Del. Salt also revealed in later interviews[citation needed] that she had suffered from bulimia "many years ago".

Pepa appeared on the fifth season of VH-1's The Surreal Life. She released an autobiography entitled Let's Talk About Pep in August 2008. The book was co-written by author Karen Hunter and offers a glimpse behind the fame, family, failures, and successes of Pepa's life, as well as being a member of one of hip-hop's most successful acts. It features an introduction by Queen Latifah, and an epilogue by Missy Elliott. To accompany the book, she also launched her own social network for her fans at http://www.LetsTalkAboutPep.com. She also starred in the reality TV series Let's Talk About Pep on the VH-1 network. 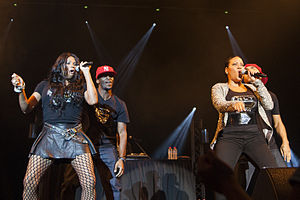 Salt-N-Pepa performing at the Canberra Theatre in 2013

Both Salt and Pepa appeared on VH-1's Hip Hop Honors in September 2005, as the trio were honorees. All three women reunited the following year for the next Hip Hop Honors program and performed "Whatta Man" with En Vogue. It was the trio's first performance in six years, and was their first ever performance of "Whatta Man" with En Vogue on stage.[11] Salt-N-Pepa reformed in 2007. All three women now have children. Spinderella has a daughter with former NBA player Kenny Anderson. Her daughter has appeared on MTV's My Super Sweet Sixteen in 2008. Pepa has a son and a daughter. Salt has a daughter and a son.

On October 14, 2007 , The Salt-n-Pepa Show debuted on VH1. Pepa initially started the formation of the series as she had previously appeared on the network in The Surreal Life. The Salt-n-Pepa Show chronicled events in the lives of Pepa and Salt as they work out past issues and return to the recording studio. Spinderella has been featured in several episodes. Later in 2008, the trio performed with MC Lyte, Yo-Yo, and Lady of Rage at the BET Hip Hop Awards. On May 9, 2009 Salt-N-Pepa performed a concert in Honolulu, Hawaii along with SWV and Lisa Lisa. The name of the show was "Ladies of the 80s". They performed at the Good Vibrations Festival in Australia in February 2010,[12] and the South West Four Festival, Clapham Common, London on August 29, 2010.[13] On October 12, 2010 Salt-N-Pepa received the I Am Hip Hop Award at the BET Hip Hop Awards.