Salvatore Di Vittorio (born 22 October 1967 in Palermo) is an Italian composer and conductor. He is Music Director and Conductor of the Chamber Orchestra of New York. He has been recognized as a "lyrical musical spirit, respectful of the ancient Italian tradition…an emerging leading interpreter of the music of Ottorino Respighi"[1] (Luigi Verdi, Philharmonic Academy of Bologna). 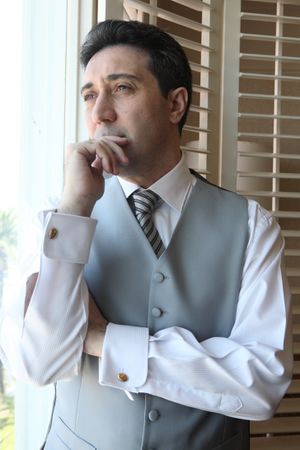 He began studies with his father Giuseppe in Italy, then studied composition with the late Ludmila Ulehla and Giampaolo Bracali at the Manhattan School of Music in the U.S., and conducting with Giampaolo Bracali, Francesco Carotenuto, and the late Piero Bellugi in Italy, who later praised his conducting style - "follows the tradition of the Italian schools."[2]

In 2007, Di Vittorio gained considerable attention with the Chamber Orchestra of New York, when he was invited by Elsa and Gloria Pizzoli (Respighi's great nieces) and Potito Pedarra (Respighi archive curator and cataloger) to edit, orchestrate and complete several early works of Respighi including the first Violin Concerto (of 1903), for publication with Edizioni Panastudio in Italy. He premiered and then recorded three of these critical editions, together with his own Overtura Respighiana and first two program symphonies, in 2010 with the Chamber Orchestra of New York for Naxos Records. The recordings were released in 2011.

Other notable restorations of historical interest include: Respighi's 1908 orchestration of Claudio Monteverdi's Lamento di Arianna (from the lost opera Arianna, 1608) edited in 2012, and Di Vittorio's completion of Respighi's orchestration of the Tre Liriche (Three Art Songs, 1913) edited for its centennial anniversary in 2013.

In November 2012, Di Vittorio gave the world premiere of his Sinfonia No. 3 "Templi di Sicilia" in his debut with the Orchestra Sinfonica Siciliana at the Teatro Politeama in Palermo."[4] RAI featured him in an interview during the evening news. The program also included the European Premieres of Di Vittorio's Overtura Respighiana and Respighi's First Concerto per Violino (in La Maggiore). Both Giornale di Sicilia and La Repubblica published reviews about the concerts, acclaiming his neo-classical works."[5] Soon after, Di Vittorio was awarded the Medal of Palermo from Mayor Leoluca Orlando who "recognized the great importance of Di Vittorio's work as a promoter of the city of Palermo around the world."[6]

Transcriptions and revisions of orchestral music of Ottorino Respighi