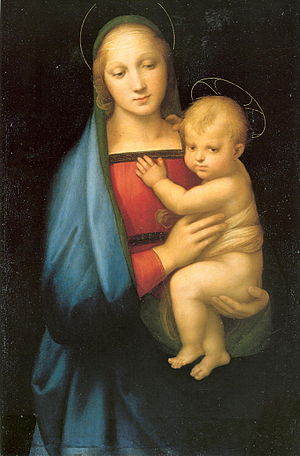 The Salve Regina, also known as the Hail Holy Queen, is a Marian hymn and one of four Marian antiphons sung at different seasons within the Christian liturgical calendar of the Catholic Church. The Salve Regina is traditionally sung at Compline in the time from the Saturday before Trinity Sunday until the Friday before the first Sunday of Advent. The Hail Holy Queen is also the final prayer of the Rosary.

The work was composed during the Middle Ages and originally appeared in Latin, the prevalent language of Western Christianity until modern times. Though traditionally ascribed to the eleventh-century German monk Hermann of Reichenau, it is regarded as anonymous by most musicologists.[1] Traditionally it has been sung in Latin, though many translations exist. These are often used as spoken prayers.

Marian antiphons have been sung, since the thirteenth century, at the close of Compline, the last Office of the day. Peter Canisius (d. 1597) noted that one praises God in Mary when one turns to her in song.[2] Liturgically, the Salve Regina is the best known of four prescribed Marian Anthems recited after Compline, and, in some uses, after Lauds or other Hours.[3] Its use after Compline is likely traceable to the monastic practice of intoning it in chapel and chanting it on the way to sleeping quarters.[4] As a piece of music, it is not part of the much older Gregorian chant repertoire, but may date back to the 11th century.[citation needed]

It was set down in its current form at the Abbey of Cluny in the 12th century, where it was used as a processional hymn on Marian feasts. The Cistercians chanted the Salve Regina daily from 1218.[3] It was popular at medieval universities as evening song, and according to Fr. Juniper Carol, it came to be part of the ritual for the blessing of a ship.[4]

In the 18th century, the Salve Regina served as the outline for the classic Roman Catholic Mariology book The Glories of Mary by Alphonsus Liguori. In the first part of the book Alphonsus, a Doctor of the Church, discusses the Salve Regina and explains how God gave Mary to mankind as the "Gate of Heaven".[5]

It was added to the series of prayers said at the end of Low Mass by Pope Leo XIII.[citation needed]

The Salve Regina is traditionally sung at the end of a priest's funeral Mass out of reverence to Mary the Mother of Christ the High Priest, and all priests.[citation needed]

As a prayer, it is commonly said at the end of the rosary.[citation needed] 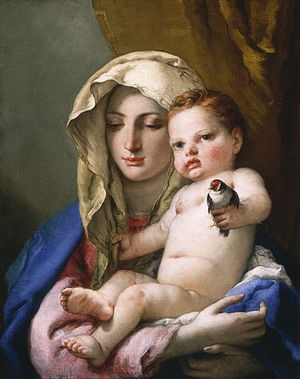 In some cases, the following versicle, response, and collect are added:

Variations exist among most translations.

(in the version used by Catholics in the United Kingdom and in the Anglo-Catholic version, the wording "mourning and weeping in this vale of tears" is used in the 5th line)

Hail, holy Queen, Mother of Mercy,
Hail, our life, our sweetness and our hope.
To thee do we cry,
Poor banished children of Eve;
To thee do we send up our sighs,
Mourning and weeping in this valley of tears.

Turn then, most gracious advocate,
Thine eyes of mercy toward us;
And after this our exile,
Show unto us the blessed fruit of thy womb, Jesus.
O clement, O loving,
O sweet Virgin Mary.

℣ Pray for us, O holy Mother of God,
℟ that we may be made worthy of the promises of Christ, thy Son.

Let us pray:
Almighty, everlasting God, who by the co-operation of the Holy Spirit didst prepare the body and soul of the glorious Virgin-Mother Mary to become a dwelling-place meet for thy Son: grant that as we rejoice in her commemoration; so by her fervent intercession we may be delivered from present evils and from everlasting death. Through the same Christ our Lord. Amen.

Let us pray:
O God, our refuge and our strength, look down with mercy upon the people who cry to Thee; and by the intercession of the glorious and immaculate Virgin Mary, Mother of God, of Saint Joseph her spouse, of the blessed Apostles Peter and Paul, and of all the saints, in Thy mercy and goodness hear our prayers for the conversion of sinners, and for the liberty and exaltation of our Holy Mother the Church. Through the same Christ Our Lord. Amen.

Hail, holy Queen, Mother of mercy,
our life, our sweetness, and our hope.
To you we cry, the children of Eve;
to you we send up our sighs,
mourning and weeping in this land of exile.

Turn, then, most gracious advocate,
your eyes of mercy toward us;
lead us home at the end
and show us the blessed fruit of your womb, Jesus:
O clement, O loving, O sweet Virgin Mary.
Amen.

English hymns based on the Latin original

The Divine Office offers the following hymn as an alternative to the Latin:

Hail, our Queen and Mother blest!
Joy when all was sadness,
Life and hope you gave mankind,
Mother of our gladness!
Children of the sinful Eve,
Sinless Eve, befriend us,
Exiled in this vale of tears:
Strength and comfort send us!

Pray for us, O Patroness,
Be our consolation!
Lead us home to see your Son,
Jesus, our salvation!
Gracious are you, full of grace,
Loving as none other,
Joy of heaven and joy of earth,
Mary, God's own Mother!

Our life, our sweetness here below, O Maria!
Our hope in sorrow and in woe, O Maria!
Triumph all ye cherubim!
Sing with us ye seraphim!
Heaven and earth resound the hymn!
Salve, salve, salve, Regina!

And when our last breath leaves us, O Maria!
Show us thy son Christ Jesus, O Maria!
Triumph all ye cherubim!
Sing with us ye seraphim!
Heaven and earth resound the hymn!
Salve, salve, salve, Regina!

As with many hymns, many more verses exist, but are rarely printed or sung. The Latin text[7] from which these verses are translated is:

As an essential component of the Compline service, the hymn has been set to music by various composers, including Victoria, Palestrina, Josquin and Lassus. Handel and Liszt composed their own settings in later years. Schubert composed no less than four versions. Arvo Pärt composed a setting first performed in the Essen Cathedral in 2002. Olivier Latry premiered in 2007 an organ work Salve Regina which reflects in seven movements the lines of the hymn in Gregorian chant.

In 1976 the words of the first verse of the Salve Regina were used as a repeating theme in the song Oh What a Circus in the musical Evita, with music by Andrew Lloyd Webber and lyrics by Tim Rice.

The 1992 comedy film Sister Act features a performance of the hymn influenced by rock & roll and gospel music.