The Salzkammergut is a resort area located in Austria. It stretches from the City of Salzburg eastwards along the Austrian Alpine Foreland and the Northern Limestone Alps to the peaks of the Dachstein Mountains, spanning the federal states of Upper Austria, Salzburg, and Styria. The main river of the region is the Traun, a right tributary of the Danube. The name Salzkammergut literally means "Estate of the Salt Chamber" and derives from the Imperial Salt Chamber, the authority charged with running the precious salt mines of the Habsburg Monarchy.[1] It is a UNESCO World Heritage Site. [2]

The lands on the shore of the Traun River comprise numerous glacial lakes and raised bogs, and the Salzkammergut Mountains and the adjacent Dachstein Mountains, the Totes Gebirge and the Upper Austrian Prealps with prominent Mt. Traunstein in the east. The towering mountain slopes are characterized by bright limestone (karst) and flysch rocks.

With its numerous lakes and mountains, the Salzkammergut offers many opportunities to take part in water sports, bathing, hiking, cycling, caving, golf and relaxing around lakes such as the Grundlsee or Toplitzsee. The Katrinalm, an alpine pasture, is found near Bad Ischl. Typical Salzkammergut culinary specialities include dishes such as Kaiserschmarrn (cut-up and sugared pancake with raisins), Krapfen (similar to doughnuts) or Lebkuchen (gingerbread).

Parts of the region around Hallstatt were listed as a World Heritage Site in 1997, with the description: "Human activity in the magnificent natural landscape of the Salzkammergut began in prehistoric times, with the salt deposits being exploited as early as the 2nd millennium B.C. This resource formed the basis of the area's prosperity up to the middle of the 20th century, a prosperity that is reflected in the fine architecture of the town of Hallstatt." The World Heritage Site includes the towns Hallstatt, Obertraun, Gosau and Bad Goisern[3] 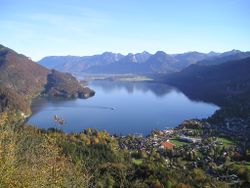 Wolfgangsee with St. Gilgen in the foreground 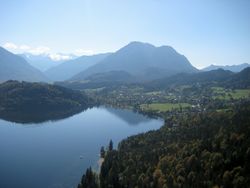 View of the Lake Altaussee and Altaussee, in the background the Hoher Dachstein

Today the Salzkammergut tourism region comprises 52 municipalities which are part of three Austrian federal states. The biggest part (72%) is in the state of Upper Austria (Oberösterreich), located in the southern Gmunden and Vöcklabruck districts. About 16%, mainly the area around Lake Altaussee (Ausseerland-Region), are part of the province of Styria (district of Liezen – political branch district of Bad Aussee). The smallest part (12%) is in the state of Salzburg, within the Salzburg-Umgebung District (Flachgau).

The Salzkammergut consists of ten regions around several lakes:

Archaeological findings in the area date back to the Neolithic era, especially the stilt houses of the Mondsee group culture, who settled the region from about 3800 BC onwards. The Germanic name hall of several settlements refers to the region's numerous salt mine, which had been in use at least since the days of the Celtic Hallstatt culture, centered at the mining town of Hallstatt. These operation were continued by the Romans, after the area had been incorporated into the Noricum province in 15 BC. A Roman settlement and salt evaporation pond at Hallstatt is documented about 100, affected by several Germanic invasions after the Marcomannic Wars, until the province was finally evacuated at the behest of the Italian king Odoacer in 488.

From about 530, Bavarii tribes settled the region from the west, they met with Alpine Slavs who had moved northwards through the Enns Valley and across the Dachstein Mountains. From 900 salt trade is again documented along the Traun River, when the area was part of the Traungau region of the German stem duchy of Bavaria, held by the comital dynasty of the Otakars, who from 1056 also ruled over the neighbouring March of Styria. While most of the Traungau fell to the Babenberg duchy of Austria upon the deposition of the Bavarian duke Henry the Lion in 1180, the southeastern Ausseerland remained with the newly established Duchy of Styria, which nevertheless from 1192 was held in personal union by the Austrian Babenbergs.

In 1278 King Rudolph I of Germany, a scion of the Sawabian House of Habsburg, finally seized both duchies from King Ottokar II of Bohemia, whom he defeated in the Battle on the Marchfeld. Rudolph's son King Albert I of Germany defended his hegemony against the rivaling Prince-Archbishops of Salzburg in the west and in 1298 made the lands of Ischl a present to his wife Countess Elisabeth of Gorizia-Tyrol. The Habsburg officials resided at Wildenstein Castle near Ischl and the surrounding estates were called Kammergut, as first documented in a 1656 deed. The salt mines were immediate domains of the Habsburg King of the Romans and mining part of his princely regalia. They were administrated by the financial aulic chamber at Vienna, represented by the salt chamber (Salzamt) in Gmunden. Emperor Maximilian I added to the territory the estates of Mondsee Abbey in 1506.

The Salzkammergut area is predominantly a tourist area and has been so for over a century.[citation needed] Emperor Franz Joseph I spent his summer holidays in Bad Ischl in the Kaiservilla, from which he governed his empire in the warmer months. This was also where he signed the declaration of war with Serbia that started World War I.[citation needed]

Recreational facilities include swimming and water sports at the many lakes, mountaineering, cycling and horse riding holidays, winter sports and cultural events. The region owes its reputation as a recreational area not only to its landscape and climate but also to its many spas.[citation needed]

There used to be a salt mining industry but it is today relatively minor contributor to the local economy.[citation needed] More important is the forest industry. Industrial sites include Ebensee, Gmunden, Laakirchen and Steyrermühl.[citation needed] The Salzkammergut also profits from its tradition of small businesses and trade companies, many of which originated due to the salt mining.[citation needed]

A well-known narrow-gauge railway [6] formerly ran from Salzburg to Bad Ischl, but it closed in 1957.