Sami (Greek: Σάμη) is a town and a former municipality on the island of Cephalonia, Ionian Islands, Greece. Since the 2011 local government reform it is part of the municipality Cephalonia, of which it is a municipal unit.[2] It is located on the central east coast of the island, and has a land area of 129.326 km². Its population was 2,341 at the 2011 census. Its municipal seat was the town of Sámi (pop. 1,025). Its next largest towns are Karavomylos (385), Grizáta (362) and Digaleto (316). 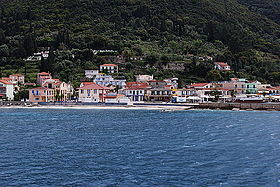 Sami Province (Greek: Επαρχία Σάμης) was one of the provinces of Cephalonia Prefecture. Its territory corresponded with that of the current municipal units Erisos, Pylaros and Sami.[3] It was abolished in 2006.