From Infogalactic: the planetary knowledge core
Jump to: navigation, search
For other uses, see Samnite (disambiguation). 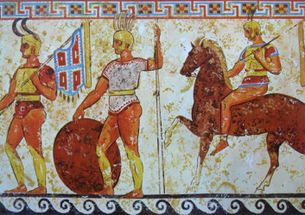 Samnite soldiers, from a tomb frieze in Nola, Campania, 4th century BC.

Samnium (Italian: Sannio) is a Latin exonym for a region of Southern Italy anciently inhabited by the Samnites. Their own endonyms were Safinim for the country (attested in one inscription and one coin legend) and Safineis for the people.[1] The language of these endonyms and of the population was the Oscan language. However, not all the Samnites spoke Oscan, and not all the Oscan-speakers lived in Samnium.

The ancient geographers were unable to relay a precise definition of Samnium's borders. Moreover, the areas it included vary depending on the time period considered.[2] The main configurations are the borders it had during the floruit of the Oscan speakers, from about 600 BC to about 290 BC, when it was finally absorbed by the Roman Republic.

This originary Samnium should not be confused with the later territory of the same name. Rome's first Emperor, Augustus, divided Italy into 11 regions.[3] Although these entities only served administrative purposes, and were identified with the sole numeral, by scholarly convention the Regio IV has been dubbed "Samnium". Ancient Samnium had actually been split up into three of the Augustan regions.[4]

The name survives in Italian today, but it defines only a small portion of what it once was - virtually, only the Province of Benevento.

Etymologically the name Samnium is generally recognized to be a form of the name of the Sabines, who were Umbrians.[5] From Safinim, Sabinus, Sabellus and Samnis an Indo-European root can be extracted, *sabh-, which becomes Sab- in Latino-Faliscan and Saf- in Osco-Umbrian: Sabini and *Safineis. The eponymous god of the Sabines, Sabus, seems to support this view. The Greek terms, Saunitai and Saunitis, remain outside the group. Nothing is known of their origin.

At some point in prehistory, a population speaking a common language extended over both Samnium and Umbria. Salmon conjectures that it was common Italic and puts forward a date of 600 BC, after which the common language began to dialectize. This date does not necessarily correspond to any historical or archaeological evidence; developing a synthetic view of the ethnology of proto-historic Italy is an incomplete and ongoing task.

The linguist, Julius Pokorny, carries the etymology somewhat further back. Conjecturing that the -a- was altered from an -o- during some prehistoric residence in Illyria he derives the names from an o-grade extension *swo-bho- of an extended e-grade *swe-bho- of the possessive adjective, *s(e)we-, of the reflexive pronoun, *se-, "oneself" (the source of English self). The result is a set of Indo-European tribal names (if not the endonym of the Indo-Europeans): Germanic Suebi and Semnones, Suiones; Celtic Senones; Slavic Serbs and Sorbs; Italic Sabelli, Sabini, etc., as well as a large number of kinship terms. The general concept is "our own kith and kin," Pokorny's "von eigener Art," "Gesamtheit der eigenen Leute," "Liebe," "Sippegenossen," "Sippenangehörigen," and the like.[6] 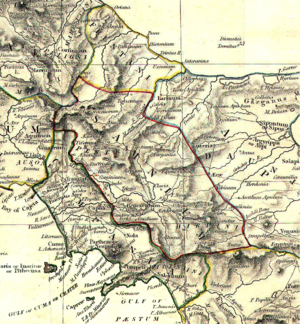 Map of ancient Samnium from The Historical Atlas by William R. Shepherd, 1911.

Samnium mostly lay on the Apennine area; it was delimited by Latium to the north, by Lucania to the south, by Campania to the west, and by Apulia to the east. The principal cities of the region were Bovaiamom, renamed Bovianum by Latins (today: Bojano or Boiano) and Maleventum (Maloenton in Oscan), which was later renamed Beneventum by the Romans (today: Benevento). For most of their history the Samnites were landlocked, but during a brief period they controlled parts of both coasts of the Italian peninsula.

The Samnites were composed of at least four tribes: the Pentri (capital: Bovianum), the Caraceni (principal cities: Cluviae, the modern Casoli, and Juvanum, the ruins of which are spread between Torricella Peligna and Montenerodomo), the Caudini (capital: Caudium, today Montesarchio) and the Hirpini (main cities: Beneventum, Abellinum). They may have later been joined by the Frentani (capital Larinum, the modern Larino). The federal capital of the League they formed was Bovianum, except for a short period between the 4th and 3rd centuries BC, when it was Aquilonia, destroyed by the Romans in 293 BC, whose probable location today is modern Agnone, in Molise; though it has also been identified with Aquilonia, in the Province of Avellino.

The earliest written record of the people is a treaty with the Romans from 354 BC, which set their border at the Liris River. Shortly thereafter the Samnite Wars broke out; they won an important battle against the Roman army in 321 BC, and their imperium reached its peak in 316 BC after further gains from the Romans. By 290 BC, the Romans were able to break the Samnites' power after some hard fought battles. The Samnites were one of the Italian peoples that allied with King Pyrrhus of Epirus during the Pyrrhic War. After Pyrrhus left for Sicily, the Romans invaded Samnium and were crushed at the Battle of the Cranita hills, but after the defeat of Pyrrhus the Samnites could not resist on their own and submitted to Rome. They joined and aided Hannibal during the Second Punic War. The Samnites were the last tribal group holding out against Rome in the Social War (91–88 BC). By 82 BC, the Roman dictator Lucius Cornelius Sulla conducted an ethnic cleansing campaign against this most stubborn and persistent of Rome's adversaries and forced the remnant to disperse. So great was the destruction brought upon them that it was recorded that "the towns of Samnium have become villages, and most have vanished altogether.".[7] 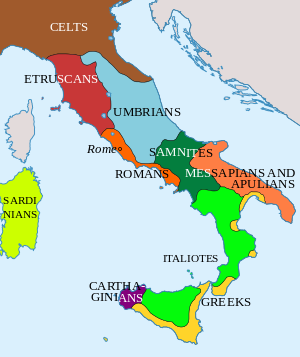 Italy in 400 BC. The Samnitic League at its peak, including also the Frentani tribe on the Adriatic Sea as a full member and controlling parts of both coasts of the Italian peninsula.

Rulers of the Samnites