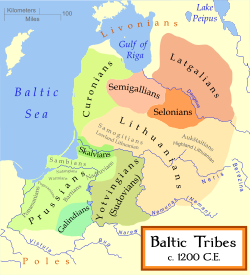 The Samogitians and Lithuanians in the context of the other Baltic tribes, around 1200

The Samogitian language, heavily influenced by Curonian, originated from the East Baltic proto-Samogitian dialect which was close to Aukstaitian dialects.

During the 5th century, Proto-Samogitians migrated from the lowlands of central Lithuania, near Kaunas, into the Dubysa and Jūra basins, as well as into the Samogitian highlands. They displaced or assimilated the local, Curonian-speaking Baltic populations. Further north, they displaced or assimilated the indigenous, Semigallian speaking peoples. Assimilation of Curonians and Semigallians gave birth to the three Samogitian subdialects: "Dounininkų", "Donininkų" and "Dūnininkų."

In the 13th century, Žemaitija became a part of the Baltic confederation called Lietuva (Lithuania), which was formed by Mindaugas. Lithuania conquered the coast of the Baltic sea from the Livonian order. The coast was populated by Curonians, but became a part of Samogitia. From the 13th century onwards, Samogitians settled within the former Curonian lands, and intermarried with that population over the next three hundred years. The Curonians had a huge cultural influence upon Samogitian and Lithuanian culture, but they were ultimately assimilated by the 16th century.

The earliest writings in Samogitian language appeared in the 19th century.

Samogitian and its subdialects preserved many features of the Curonian language, for example:

as well as various other features not listed here.

The Samogitian dialect is highly inflected like standard Lithuanian, in which the relationships between parts of speech and their roles in a sentence are expressed by numerous flexions. There are two grammatical genders in Samogitian – feminine and masculine. Relics of historical neuter are almost fully extinct while in standard Lithuanian some isolated forms remain. Those forms are replaced by masculine ones in Samogitian. Samogitian stress is mobile but often retracted at the end of words, and is also characterised by pitch accent. Samogitian has a broken tone like the Latvian and Danish languages. The circumflex of standard Lithuanian is replaced by an acute tone in Samogitian. It has five noun and three adjective declensions. Noun declensions are different from standard Lithuanian (see the next section). There are only two verb conjugations. All verbs have present, past, past iterative and future tenses of the indicative mood, subjunctive (or conditional) and imperative moods (both without distinction of tenses) and infinitive. The formation of past iterative is different from standard Lithuanian. There are three numbers in Samogitian: singular, plural and dual. Dual is almost extinct in standard Lithuanian. The third person of all three numbers is common. Samogitian as the standard Lithuanian has a very rich system of participles, which are derived from all tenses with distinct active and passive forms, and several gerund forms. Nouns and other declinable words are declined in seven cases: nominative, genitive, dative, accusative, instrumental, locative, and vocative.

The earliest writings in Samogitian dialect appear in the 19th century. Famous authors writing in Samogitian:

There are no written grammar books in Samogitian because it is considered to be a dialect of Lithuanian, but there were some attempts to standardise its written form. Among those who have tried are S. Anglickis, P. Genys, S. Čiurlionienė-Kymantaitė, B. Jurgutis, J. A. Pabrėža. Today, Samogitian has a standardised writing system but it still remains a spoken language and everyone writes in their native speech.

The differences between nominals are considerable too. The fifth noun declension has almost become extinct, it merged with the third one. The plural and some singular cases of the fourth declension have endings of the first one (e.g.: singular nominative sūnos, plural nom. sūnā, in standard Lithuanian: sg. nom. sūnus, pl. nom. sūnūs). The neuter of adjectives is extinct (it was pushed out by adverbs, except šėlt 'warm', šalt 'cold', karšt 'hot') while in standard Lithuanian it is still alive. Neuter pronouns were replaced by masculine. The second declension of adjectives is almost extinct (having merged with the first declension)—only singular nominative case endings survived. The formation of pronominals is also different from standard Lithuanian. 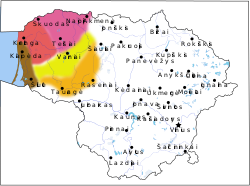 There are attempts by the Samogitian Cultural Society to stem the loss of the dialect. The council of Telšiai city put marks with Samogitian names for the city at the roads leading to the city. A new system for writing Samogitian was created.[citation needed]

The first use of a unique writing system for Samogitian was in the interwar period, however it was neglected during the Soviet period, so only elderly people knew how to write in Samogitian at the time Lithuania regained independence. The Samogitian Cultural Society renewed the system to make it more usable.

The writing system uses similar letters to standard Lithuanian, but with the following differences:

As previously it was difficult to add these new characters to typesets, some older Samogitian texts use double letters instead of macrons to indicate long vowels, for example aa for ā and ee for ē; now the Samogitian Cultural Society discourages these conventions and recommends using the letters with macrons above instead. The use of double letters is accepted in cases where computer fonts do not have Samogitian letters; in such cases y is used instead of Samogitian ī, the same as in standard Lithuanian, while other long letters are written as double letters. The apostrophe might be used to denote palatalization in some cases; in others i is used for this, as in standard Lithuanian.

A Samogitian computer keyboard layout has been created.