From Infogalactic: the planetary knowledge core
Jump to: navigation, search
For the Conservative Member of Parliament, see Sampson Lloyd (MP). 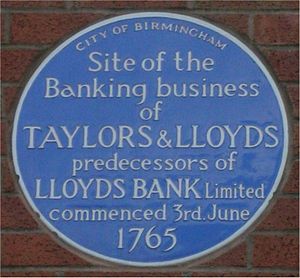 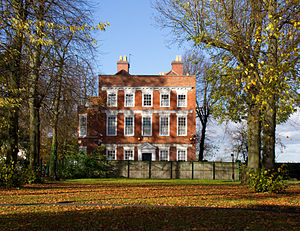 "Farm", in the former manor of Bordesley, now amidst the urban landscape of Sparkbrook, Birmingham

There are three generations of Sampson Lloyd in the Lloyd family of Birmingham, England. The second co-founded Lloyds Bank.

Sampson I Lloyd (1664-1724) and Mary (née Crowley, sister of Ambrose Crowley), Quakers of Welsh origin, moved from their Leominster, Herefordshire farm in 1698 to Edgbaston Street in Birmingham. The Lloyd family was formerly seated at Dolobran Hall, Montgomeryshire, in Wales, which had been abandoned by Sampson I's father the Quaker Charles II LLoyd (1637-1698), who deemed the town of Birmingham more tolerant to his non-conformist religion, for his adherance to which he had been imprisoned for several years at Welshpool in Wales.

After the death of Sampson I in 1725 his sons Charles and Sampson II bought the Town Mill and traded in iron. Sampson II (1699–1779)[1] also bought a forge in Burton upon Trent. After Charles' death in 1741, Sampson II became wealthy and in 1742 bought for £1,290 a 56 acre estate called "Owen's Farm" in the manor of Bordesley (in the area now known as Sparkbrook) on the edge of the town of Birmingham. He retained the Tudor farmhouse and built nearby a Georgian mansion which he called "Farm", now a grade II* listed building. He continued to reside partly in his former townhouse in Edgbaston Street, Birmingham, near his ironworks. In 1765, at the age of 66, he formed a company with the leading Birmingham button maker John Taylor (1704–1775) and his own son, Sampson III, creating Birmingham's first bank: Taylor's and Lloyds, located at 7 Dale End. This is the bank which became Lloyds Bank, and then Lloyds TSB.

Another son of Sampson II, Charles Lloyd (1748–1828), was also a partner in the bank as well as a poet and campaigner against slavery. He lived, and died, in Bingley House on Broad Street, later demolished to build the Bingley Hall, itself demolished for the International Convention Centre and Symphony Hall. His son, Charles Lloyd II, unsuccessful poet, was only briefly involved in the bank and moved to Versailles and died in 1839.