Young was born in Pittsburgh, Pennsylvania, to John Young Jr. and Hannah Scott Young. He was educated at Jefferson College (now Washington & Jefferson College) and married Margaret McFadden in 1861.

On the outbreak of the Civil War, he joined the 12th Pennsylvania Infantry in April 1861 as a private. After the expiration of his term he was commissioned Captain, 4th Pennsylvania Cavalry in September. He served with distinction in the Army of the Potomac throughout the war, receiving promotion to major in September 1862, to lieutenant colonel in October 1864 and to colonel in December 1864. Young was wounded four times in 1864 and 1865.[2] He served in brigade command in the cavalry corps during the last days of the Appomattox Campaign.[2] He was mustered out of the volunteers on July 1, 1865.[2]

After the war, Young joined the Military Order of the Loyal Legion of the United States - a military society for officers who had served the Union in the Civil War.

After the Civil War he rejoined the Regular Army as a First Lieutenant in May 1866, and was promoted to Captain of the 8th U.S. Cavalry in July 1866. On December 11, 1866, President Andrew Johnson nominated Young for appointment to the brevet rank of Brigadier General of Volunteers, to rank from April 9, 1865, in recognition for his services in the Siege of Petersburg and the Appomattox Campaign and the U.S. Senate confirmed the appointment on February 6, 1867.[3]

Young served with distinction throughout the Indian Wars and was regularly promoted (to Major in 1883 and to Lieutenant Colonel in 1892), rising to the rank of Colonel of the 3rd U.S. Cavalry in 1897.

On the commencement of hostilities with Spain he was promoted Brigadier General of Volunteers in May 1898, and in July was made Major General of Volunteers while he commanded a division in Cuba during the Santiago Campaign of the Spanish–American War. That same year, he became a Veteran Companion of the Missouri Commandery of the Military Order of Foreign Wars. 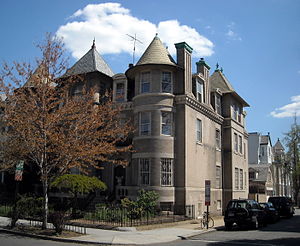 During the Philippine–American War, he returned to the rank of Brigadier General of Volunteers and commanded brigades in the Northern Luzon District, of which he was made military governor.

From February 1901 to March 1902, he commanded the military district of California from the Presidio of San Francisco. Under the new General Staff System, he was appointed as the first Chief of Staff of the General Staff in August 1903, a position he held until retirement in January 1904.[1]

From 1909 to 1910, he was president of the board of inquiry that investigated the alleged riot of black soldiers of the 25th U.S. Infantry at Brownsville, Texas, August 13, 1906, and affirmed the subsequent dishonorable discharge of 159 men by order of President Theodore Roosevelt.

As Acting Superintendent of Yellowstone National Park at Fort Yellowstone in 1897 (after a stint in the same role at Yosemite in 1896) Colonel Young introduced fish conservation measures. In 1907 after his retirement, he was appointed full Superintendent by the Secretary of the Interior. He served as full Superintendent for two years.[4] He died at his house in Helena, Montana, and was honored with a state funeral in Washington, D.C., and was buried in Arlington National Cemetery.

In 1886 his daughter Burton Young (1868–1944) married George Windle Read, who attained the rank of major general and was a division and corps commander of the American Expeditionary Force during World War I.[5] Their children included Burton Young Read (1889–1981), a career soldier who served from the early 1900s through World War II before retiring as a Colonel,[6][7][8] and George Windle Read, Jr., a career soldier who served in both world wars and attained the rank of Lieutenant General as commander of the US Army Armor Center and the Second United States Army.[9][10][11]