Blatchford was born in Auburn, New York, where his father was a well known attorney and friend of Daniel Webster. He was educated at Columbia College, where he joined the Philolexian Society, and graduated when he was 17 years old. In 1840, he served as the private secretary to Governor William H. Seward.

Blatchford read law while working for the governor and then entered into the private practice of law with his father and uncle. In 1854, he moved to New York City and started a law firm, Blatchford, Seward & Griswold, now known as Cravath, Swaine & Moore. He became well known for preparing summaries of United States circuit court cases, serving for a time as reporter of decisions for the Circuit Court in New York, and developed a lucrative practice in admiralty law. 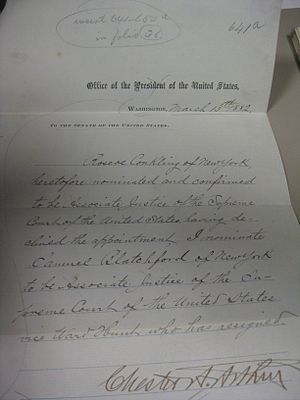 On what he thought was inside information, Blatchford sold out his shares on the eve of Fort Sumter and the onset of the Civil War, preserving his personal fortune.[1]

On May 3, 1867, Blatchford received a recess appointment from President Andrew Johnson to a seat on the United States District Court for the Southern District of New York vacated by Samuel R. Betts.[2] Formally nominated on July 13, 1867, Blatchford was confirmed by the United States Senate three days later, receiving his commission the same day.[2] On February 15, 1878, President Rutherford B. Hayes promoted Blatchford to serve as Circuit Judge of the Second U.S. Judicial Circuit to fill the vacancy caused by the death of Alexander Smith Johnson.[2] Blatchford was confirmed by the Senate, and received his commission, on March 4, 1878.[2]

On March 22, 1882, Blatchford was nominated to the Supreme Court of the United States by President Chester A. Arthur, to a seat vacated by Ward Hunt,[2] after two other candidates, Senator George F. Edmunds and former Senator Roscoe Conkling, declined. He was confirmed by the United States Senate on March 22, 1882 and received his commission the same day.[2] Blatchford thus became the first person to serve at all three levels of the federal judiciary—as a District Judge, a Circuit Judge, and a Supreme Court Justice. When he became a Justice on March 13, 1882, it was estimated that his personal wealth exceeded $3 million, mostly held in real estate.[citation needed]

Blatchford was an expert in admiralty law and patent law, and authored Blatchford and Howland's Admiralty Cases, which was considered the most complete work of its kind. During his eleven-year tenure on the High Court he wrote 430 opinions and two dissents. His most noteworthy opinions, Chicago, Milwaukee & St. Paul Railway Co. v. Minnesota, and Budd v. People of New York, were roundly criticized for their apparently contradictory conclusions about due process under the Fourteenth Amendment of the U.S. Constitution.

Blatchford served as a trustee of Columbia College and enjoyed collecting calendars, almanacs and salt shakers. He married Caroline Frances Appleton in Boston in 1844. They had one son, Samuel Appleton Blatchford. Blatchford died in 1893 in Newport, Rhode Island, at age seventy-three.