Born in St Botolph's parish, Colchester, Essex,[2] the son of William Halsnoth, a baker, and his wife Agnes,[3] Harsnett was probably educated at Colchester's free school, now Colchester Royal Grammar School.[1] After leaving school, he was inducted into King's College, Cambridge on 8 September 1576[1] and removed into Pembroke College, Cambridge[4] where he gained a BA in 1580/1[5] and was elected a Fellow on 27 November 1583.[1] In 1583 he was ordained into the Church of England,[1] where he was soon disciplined by Archbishop Whitgift for preaching against predestination at St Paul's Cross on 27 October 1584.[1] As Hughson notes, "he was one of those divines who opposed the decrees of the synod of Dort and he wrote a very learned treatise against absolute predestination".[2] In 1584 he proceeded Master of Arts by seniority.[1]

In March 1587 Harsnett became headmaster of Colchester Royal Grammar School.[4] In recognition of his achievements, the school has had, since 1908, a school house bearing his name.[6] Preferring his studies at Cambridge University to the position, he resigned his office in November 1588, disliking the "painful trade of teaching",[1] and returned to Pembroke Hall where he studied divinity,[4] gaining his BD c.1590.[1]

He re-entered himself into Pembroke Hall,[2] where he was first a fellow and was elected master on 1 November 1605, remaining in that position until 1616, when he resigned because accusations totalling fifty-seven articles were made against him,[4] by the Fellows of Pembroke to King James I.[1] He was also Vice-Chancellor of Cambridge University for the years 1606, the same year he gained his Doctor of Divinity degree,[1] and 1609.[1] 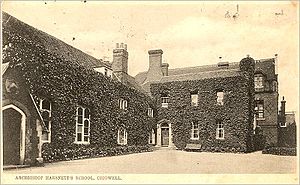 Chigwell School, which Harsnett founded, circa 1904

In 1592 he served the office of Junior Proctor[1] and five years later became chaplain to Dr Bancroft,[4] then Bishop of London and shortly to become Archbishop of Canterbury by whose favour he quickly rose through the ranks. On the authority of Bancroft, he obtained the rectory of St Margaret, New Fish Street, London which he resigned in 1604 and the vicarage of Chigwell in Essex on 14 June 1597[1] which he resigned in 1605.[4] Whilst at Chigwell, his wife, Thomazine, died in 1601, having given birth in 1600 to a short-lived daughter.[3] Even after 1605 he continued to reside at Chigwell, where he had purchased a house and estate. In 1619 he purchased land in the parish on which he founded both a Latin school (which survives as Chigwell School) and an English school in 1629.[3]

In 1598 he was promoted, becoming the prebendary of Mapesbury on 5 August[1] and on 17 January 1602 the archdeacon of Essex[1] – both posts chosen for him by Bishop Bancroft. On 16 April 1604 Sir Thomas Lucas of Colchester, father of Charles Lucas, installed him in the rectory of Shenfield, Essex.[4]

Having been Bishop of Chichester since 13 November 1609,[1] on 8 August 1619, he became Bishop of Norwich, resigning the living of Stisted he had held since 1609.[1] He spent most of his time when absent from his city at Ludham, where he built a chapel and consecrated it for divine worship.[7] In May 1624 he was charged before Parliament with high-handedness by the citizens of Norwich and in that same year he also persecuted the Puritans in Great Yarmouth, leading to a complaint by them to King Charles I in 1627.[1]

Towards the end of his life he fell ill, signing his will on 13 February 1631, to which he signed a codicil on 18 May, and taking the waters at Bath in April of that year.[1] He died at Moreton-in-Marsh while returning from Bath on 25 May 1631 and his body took ten days to return to Chigwell.[1] He was buried at St Mary's Church, Chigwell alongside his wife and daughter, both named Thomasine who had both died in 1601. A brass of Harsnett can be found in St Mary's Church, Chigwell, although it has been moved from its original position over his grave.[3] The image on the brass is believed to be a true representation of him and he most likely sat for it shortly before his death. It has been suggested that it is of Flemish origin but, because of the similarities it bears to the brass of Sir John Filmer in East Sutton, Kent, it is now believed to be by Edward Marshall. His epitaph on the brass reads:[1]

There are two changes from the inscription he requested in his will – his name is spelt as "Samuell", not "Samuel" and "deindignior" should have been "dein indignior".[1]

In his home town of Colchester he is commemorated by a statue on the town hall[8] and a stained glass window in St. Botolph's Church. His library of theological works was bequeathed to the borough of Colchester for the use of local clergy;[4] it can now be found in the library of the University of Essex.[9]

Harsnett is noted for his sceptical attitude towards demons and witchcraft. As the chaplain to Bishop Bancroft, Harsnett was commissioned to write a treatise condemning the 1590s exorcisms of John Darrell, having sat on the 1598 commissions which investigated his activities.[1] Darrell, curate at St. Mary's Church, Nottingham was a puritan minister who performed a series of public exorcisms in the English Midlands. Eventually, the exorcisms caused such a disturbance that they attracted the attention of Anglican authorities in London. Harsnett's A Discovery of the Fraudulent Practises of John Darrel (1599)[10] was a polemical piece intended to discredit Darrell's puritan agenda. It was drafted as a piece of political propaganda, but it also genuinely questioned the belief in demons. In this way, Harsnett sought natural explanations for supposedly supernatural phenomena.

In 1603, he wrote another book, A Declaration of Egregious Popish Impostures, published by order of the Privy Council,[1] which condemned exorcisms performed by Roman Catholic priests in the 1580s. Shakespeare used this book as a source, pulling words and phrases when writing the play King Lear, mainly spoken by Edgar while he feigns madness and John Milton is said to have been influenced by it when writing L'Allegro.

As a member of England's religious authority, Harsnett's sceptical attitudes, divided equally between puritanism and popery,[4] set important precedents for English policy. For example, by coming close "to denying the reality of witchcraft" he may have contributed to the relative lack of witch hunts in England, compared to other countries.[11]

Harsnett is known to have written eight works, which are as follows: