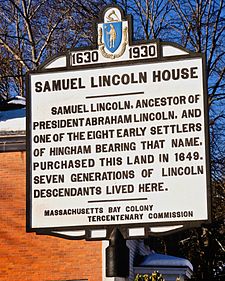 Samuel Lincoln (died May 26, 1690), was an Englishman and progenitor of many notable United States political figures, including his 4th great-grandson, President Abraham Lincoln, Maine governor Enoch Lincoln, and Levi Lincoln, Sr. and Levi Lincoln, Jr., both of whom served as Massachusetts Representatives, Governor and Lieutenant Governor.[2] Because of Samuel Lincoln's descendants, his fortuitous arrival in the Massachusetts Bay Colony, and the fact that his ancestry is known for several generations, he is considered father of the most prominent branch of Lincolns in the United States.[3]

Having grown up in meager circumstances due to a family squabble in which his wealthy grandfather disinherited his earlier children, Samuel Lincoln became an apprentice weaver under Francis Lawes of Norwich, England. Samuel Lincoln's father Edward had abandoned his home at Swanton Morley near Hingham after he was cut out of his father Richard's will, and relocated to some small acreage at Hingham.[4][5] In 1637, Lincoln left England for the New World with Lawes' family, embarking on a ship named John & Dorothy. Although most accounts indicate that he was 15 years old at the time, it has been suggested that he misrepresented his age in order to be permitted to make the voyage.[6]

Samuel sailed for the colony of Massachusetts, where his older brother Thomas – known in early records as "Thomas Lincoln the Weaver" to distinguish him from several other unrelated Thomas Lincolns – had already settled. Samuel's brother Thomas, who settled in 1635 in Hingham, Massachusetts, was granted a house lot by the town. Although twice married, Thomas had no children.[7] After his death, he left a great deal of his property, including several house lots, to Samuel and his nephews.[8]

Life and family in Massachusetts 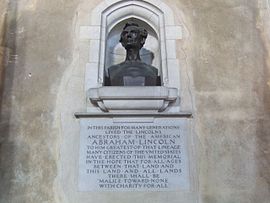 Samuel Lincoln helped build the Old Ship Church in Hingham.[9] He married Martha Lyford of Ireland around 1649, possibly the daughter of the Rev. John Lyford, and the couple had eleven children, three of whom died in their infancy, but another three of whom lived into their eighties. Lincoln's eldest son, born August 25, 1650, was also named Samuel. The emigrant Samuel Lincoln's fourth son was Mordecai Lincoln, who became a blacksmith, and who was the ancestor of Abraham Lincoln.[10] Genealogists have noted the common and repeated use of certain Biblical names in the Lincoln family, particularly Abraham, Samuel, Isaac, Jacob, and Mordecai, a common practice among early Puritan settlers in the Massachusetts Bay Colony.[11] Many later Lincoln descendants, including the original emigrant's son, were named Samuel in succeeding generations.

Interestingly, Samuel's mother also belonged to a family long associated with American government: the Gilmans of Exeter, New Hampshire. Samuel's mother Bridget Gilman was the daughter of Edward Gilman of Hingham, Norfolk, England, whose son Edward Gilman Jr. emigrated to Hingham, Massachusetts, later to Ipswich, Massachusetts and finally to Exeter, where he and his family became prominent businessmen, elected officials and, later, ardent Revolutionary War patriots. Nicholas Gilman, a signer of the U.S. Constitution, was a member of this family.

In 1937, the 300th anniversary of Samuel Lincoln's arrival in Massachusetts was commemorated with the dedication of a tablet at the Old Ship Church in Hingham, Massachusetts. President Abraham Lincoln is honored by a bust in the church of St. Andrews in Hingham, Norfolk, England, unveiled in a 1919 ceremony by then-American Ambassador John W. Davis.[12] Samuel Lincoln's father Edward, who remained in Hingham, England, died on February 11, 1640, and was buried in the graveyard of St. Andrews Church.[13] 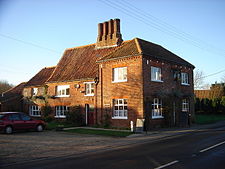