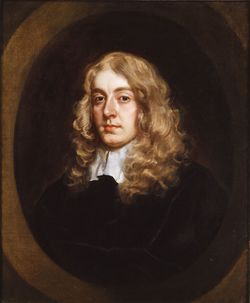 Portrait of Morland by Peter Lely, 1645

Sir Samuel Morland, 1st Baronet (1625 – 30 December 1695), or Moreland, was an English academic, diplomat, spy, inventor and mathematician of the 17th century, a polymath credited with early developments in relation to computing, hydraulics and steam power.

The son of Thomas Morland, the rector of Sulhamstead Bannister parish church in Berkshire, he was educated at Winchester College and Magdalene College, Cambridge, where he became a Fellow in 1649.[1] Devoting much time to the study of mathematics, Morland also became an accomplished Latinist and was proficient in Greek, Hebrew and French – then the language of culture and diplomacy. While a tutor at Cambridge, he first encountered Samuel Pepys who became a lifelong acquaintance.

A keen follower of public affairs, he left Cambridge and entered public service. He undertook a trip to Sweden in 1653, and in 1655 was sent by Oliver Cromwell on a mission to Italy to protest at actions taken against the Waldensians by the Duke of Savoy. He remained in Geneva for some time in an ambassadorial role, and also wrote a book: The History of the Evangelical Churches of the Valleys of Piemont (1658).

While serving as secretary to John Thurloe, a Commonwealth official in charge of espionage, however, Morland became disillusioned with the Government of the Commonwealth, allegedly after learning of a plot by Sir Richard Willis, Thurloe and Richard Cromwell to assassinate the future King Charles II. As a double agent, Morland began to work towards the Restoration, engaging in espionage and cryptography – activities that later helped him enter the King's service.

On 18 July 1660 he was created a baronet and given a minor role at court, but his principal source of income came from applying his knowledge of mathematics and hydraulics to construct and maintain various machines. These included: 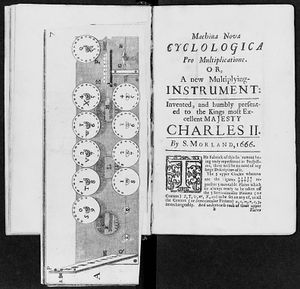 "A new Multiplying Instrument" invented by Morland in 1666

From 1677 he lived in the Vauxhall area of central London, where he made improvements to New Spring Gardens which later became Vauxhall Gardens. In 1684 he moved to a house in Lower Mall, Hammersmith.

There are monuments to two of Morland's three wives in the nave of Westminster Abbey.[6]