From Infogalactic: the planetary knowledge core
Jump to: navigation, search
File:Pickwick by Kyd 1889.jpg
Mr. Pickwick as illustrated by 'Kyd' (1889)

Samuel Pickwick is a fictional character and the main protagonist in The Pickwick Papers (1836), the first novel by author Charles Dickens. Pickwick is a retired successful businessman and is the Founder and Chairman of the Pickwick Club.[1]

File:Copping-Pickwick.jpg
Mr Pickwick as illustrated by Harold Copping in 1924

Believed to have been named after the British businessman Eleazer Pickwick (c.1749–1837), although he is the main character in The Pickwick Papers Samuel Pickwick is mostly a passive and innocent figure in the story around whom the other more active characters operate. Having an almost child-like simplicity, Pickwick is loyal and protective toward his friends but is often hoodwinked by conmen and poseurs; he is always gallant towards women, young and old, but can also be indecisive in his dealings with them.[2]

To extend his researches into the quaint and curious phenomena of life, Pickwick creates the Pickwick Club and suggests that he and three other "Pickwickians" (Mr Nathaniel Winkle, Mr Augustus Snodgrass and Mr Tracy Tupman) should make journeys to places remote from London and report on their findings to the other members of the club.[3]

Pickwick careers from one comic disaster to another in pursuit of adventure or honour attended by the other members of the Pickwick Club. The height of his development occurs at the Fleet Prison where, as the result of a breach of promise suit against his landlady, Mrs. Bardell, he is imprisoned for refusing to pay her damages and costs. In the Fleet Pickwick encounters his nemesis Alfred Jingle as a fellow resident. Moved with compassion, Pickwick forgives him and charitably bails him out and later arranges for Jingle and his servant Job Trotter to pursue their fortune in the West Indies.

When Mrs. Bardell herself is sent to the Fleet Prison Pickwick learns that the only way he can relieve her suffering is by paying her costs in the action against himself, thus at the same time releasing himself from the prison.[4][5]

Always on hand to save the day is his able manservant Sam Weller; the relationship between the idealistic and unworldly Pickwick and the astute cockney Weller has been likened to that between Don Quixote and Sancho Panza.[6] By the end of the novel Pickwick looks upon Sam Weller almost as a son,[2] a feeling which is reciprocated by Sam.[3] 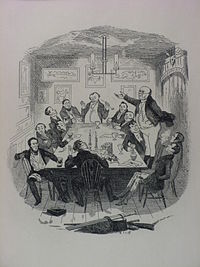 In film, television and on stage Mr Pickwick has been portrayed by:[7]

Also, in James Benmore's novel Dodger, Pickwick is revealed to have been the owner of the snuff box stolen by The Artful Dodger that leads to the Dodger's transportation to the colonies as described in Oliver Twist; true to character, Pickwick reacts to the theft with amazement and almost admiration at how he never even felt the boy's hands in his pocket, commenting, 'He must have the touch of a feather, this boy.'