From Infogalactic: the planetary knowledge core
Jump to: navigation, search
For other people of the same name, see Samuel Rolle. 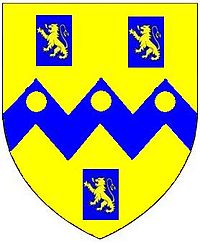 Arms of Rolle: Or, on a fesse dancetté between three billets azure each charged with a lion rampant of the first three bezants

Sir Samuel Rolle (c. 1588-1647)[1] of Heanton Satchville in the parish of Petrockstowe, Devon, served as Member of Parliament for Callington, Cornwall in 1640 and for Devon 1641-1647. He supported the parliamentary side in the Civil War.

Samuel Rolle was born c. 1588,[1] the eldest son and heir of Robert Rolle (died 1633) of Heanton Satchville in the parish of Petrockstowe, Devon, by his wife Joan Hele, daughter of Thomas Hele of Fleet, Devon. Samuel was a great-grandson, in a junior line, of George Rolle (c. 1486-1552) of Stevenstone, Devon, founder of the influential and wealthy Rolle family of Devon, Keeper of the Records of the Court of Common Pleas and MP for Barnstaple in 1542 and 1545. Samuel's brothers included:[2]

A monumental brass to Marie Stradling (died 1613), first wife of Sir Samuel I Rolle (c. 1588-1647) of Heanton Satchville survives in the parish church of St Stephen-by-Saltash, Cornwall, affixed to the wall at the east end of the north aisle, formerly on the floor by the altar. The inscription reads:

Here lyeth the bodie of Marie one of ye daughters & heyres of Edmond Stradlinge of St Georges in Somersett Esq. who maried Samuell ye eldest sonne of Robert Rolle of Heaunton in Devon Esq. She dyed yr 23th of Janua. 1613.

The arms depicted are: Or, on a fesse dancetté between three billets azure each charged with a lion rampant of the first three bezants a mullet for difference (Rolle) impaling quarterly 1: Paly of six (shown here incorrectly as five) argent and azure on a bend gules three cinquefoils or (Stradling); 2: Azure, a chevron between three crescents or (Berkerolles of Coity Castle, Glamorgan; 3: Chequy...and...afess ermine (Turberville of Coity Castle); 4: ...three fishes niant in pale...on a chief a hedgehog (?).[9]

Samuel Rolle died and was buried 7 December 1647 at Petrockstowe.[2]