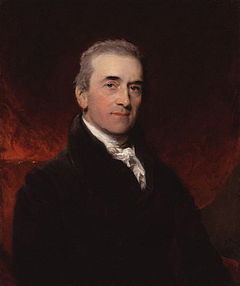 Romilly was born in Frith Street, Soho, London, the second son of Peter Romilly, a watchmaker and jeweller. His grandfather had emigrated from Montpellier after the revocation of the edict of Nantes, and had married Margaret Garnault, a Huguenot refugee like himself, but of a far wealthier family. Samuel served for a time in his father's shop; he was well-educated, becoming a good classical scholar and particularly conversant with French literature. A legacy of £2000 from one of his mother's relations led to his being articled to a solicitor and clerk in chancery with the idea of qualifying himself to purchase the office of one of the six clerks in chancery.

In 1778, however, Romilly determined to go to the bar, and entered himself at Gray's Inn. He went to Geneva in 1781, where he made the acquaintance of the chief democratic leaders, including Étienne Dumont. Called to the bar in 1783, he went the midland circuit, but was chiefly occupied with chancery practice. On the publication of Martin Madan's Thoughts on Executive Justice, advocating the increase of capital punishments, he at once wrote and published in 1786 Observations on Madan's book.

Of more general interest is his intimacy with the great Honoré Mirabeau, to whom he was introduced in 1784. Mirabeau saw him daily for a long time and introduced him to the Marquess of Lansdowne, who highly appreciated him, and, when Mirabeau became a political leader, it was to Romilly that he applied for an account of the procedure used in the House of Commons of Great Britain.

He visited Paris in 1789, and studied the course of the Revolution there; and in 1790 he published his Thoughts on the Probable Influence of the Late Revolution in France upon Great Britain, a work of great power. His practice at the chancery bar continued largely to increase, and in 1800 he was made a King's Counsel. In 1805 he was appointed chancellor of the county palatine of Durham. 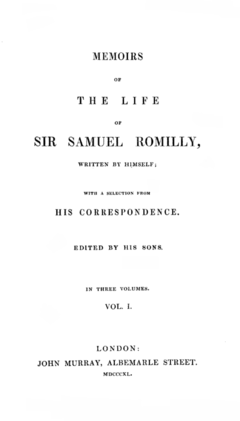 Romilly's great abilities were thoroughly recognized by the Whig party, to which he attached himself; and in 1806, on the accession of the "Ministry of All the Talents" to office, he was offered the post of Solicitor General, although he had never sat in the House of Commons. He accepted the office, and was knighted and brought into parliament for Queenborough. He went out of office with the government, but remained in the House of Commons, sitting successively for Horsham, Wareham and Arundel.

Romilly was a vocal opponent of the slave trade and gave his support to William Wilberforce's abolition campaign. During the parliamentary debate on the Slave Trade Bill, Romilly paid tribute to Wilberforce, saying that his leadership had "preserved so many millions of his fellow creatures."[1] As he concluded his remarks, Romilly was greeted with a standing ovation by other Members of Parliament, a reaction that very rarely occurred in the House of Commons. Wilberforce himself was said to have been overcome with emotion, sitting with his head in his hands, tears streaming down his face.[2] This moment in the debate was portrayed in the 2006 film, Amazing Grace, although the words were instead spoken by Charles James Fox (played by Michael Gambon).

Romilly's work in reforming criminal law began with his Observations on a Late Publication [by Martin Madan], Intituled, Thoughts on Executive Justice (1786), which developed the views of Beccaria. In 1808, he managed to repeal the Elizabethan statute which made it a capital offence to steal from the person. In the following year, three bills repealing draconian statutes were thrown out by the House of Lords under the influence of Lord Ellenborough. Romilly saw further bills rejected; but in 1812 he had repealed a statute of Elizabeth I making it a capital offence for a soldier or a mariner to beg without a pass from a magistrate or his commanding officer. In 1813 he failed to pass a law which would have abolished corruption of blood for all crimes, but in the following year he tried again and succeeded (except for treason and murder). Also in 1814 he succeeded in abolishing hanging, drawing and quartering.

Romilly's efforts made his reputation. In 1818, he was returned at the head of the poll for the city of Westminster. He died shortly afterwards.

Romilly married Anne Garbett, daughter of Francis Garbett, of Knill Court, Herefordshire, in 1798. They had two sons, Sir John Romilly, a distinguished lawyer and politician who was ennobled as Baron Romilly in 1866, and Frederick Romilly, a politician. On 29 October 1818 Lady Romilly died in the Isle of Wight. The shock was dreadful to Romilly. In his agony he fell into a delirium, and in a moment, when unwatched, he sprang from his bed, cut his throat, and expired in a few minutes. The event took place at his house in Russell Square, London, on 2 November 1818. His nephew Peter Mark Roget attended to Romilly in his final moments. His last words were written: My dear, I wish ... presumably regarding his late wife.[3] He is buried near Presteigne, in Radnorshire, Wales, in the family vault of his relative, Colonel Foley.[4]