From Infogalactic: the planetary knowledge core
Jump to: navigation, search
For the jurist and US Congressman, see Samuel Sewall (congressman).

Samuel Sewall (/ˈsuːəl/; March 28, 1652 – January 1, 1730) was a judge, businessman, and printer in the Province of Massachusetts Bay, best known for his involvement in the Salem witch trials,[1] for which he later apologized, and his essay The Selling of Joseph (1700), which criticized slavery.[2] He served for many years as the chief justice of the Massachusetts Superior Court of Judicature, the province's high court.

Sewall was born in Bishopstoke, Hampshire, England, on March 28, 1652, the son of Henry and Jane (Dummer) Sewall.[3] His father, son of the mayor of Coventry, had come to the English North American Massachusetts Bay Colony in 1635, where he married Sewall's mother, and returned to England in the 1640s.[4]

Following the restoration of Charles II to the English throne, the Sewalls again crossed the Atlantic in 1661, settling in Newbury, Massachusetts.[5] It is there the young Samuel "Sam" grew up along the Parker River and Plum Island Sound.

Like other local boys he attended school at the home of James Noyes, whose cousin, Reverend Thomas Parker, was the principal instructor. From Parker Sewall acquired a lifelong love of verse, which he wrote in both English and Latin.[6] In 1667 Sewall entered Harvard College, where his classmates included Edward Taylor and Daniel Gookin, with whom he formed enduring friendships. Sewall received his first degree, a BA, in 1671, and his MA in 1674.[7] In 1674 he began keeping a journal, which he maintained for most of his life; it is one of the major historical documents of the time. In 1679 he became a member of the Military Company of Massachusetts.

Sewall's involvement in the political affairs of the colony began when he became a freeman of the colony, giving him the right to vote. In 1681 he was appointed the official printer of the colony; one of the first works he published was John Bunyan's The Pilgrim's Progress. After John Hull died in 1683, Sewall was elected to replace him on the colony's council of assistants, a body that functioned both as the upper house of the legislature and as a court of appeals. He also became a member of Harvard's Board of Overseers.

Sewall's oral examination for the MA was a public affair, and was witnessed by Hannah Hull, daughter of colonial merchant and mintmaster John Hull. She was apparently taken by the young man's charms, and pursued him; they were married in February 1676. Her father, whose work as mintmaster had made him quite wealthy, gave the couple £500 in colonial currency as a wedding gift. (Biographer Richard Francis notes that the weight of this amount of specie, 125 pounds (57 kg), may have approximated the bride's weight, giving rise to Nathaniel Hawthorne's legend that the gift was her weight in coins.)[8] Sewall moved into his in-laws' mansion in Boston, and was soon involved in that family's business and political affairs. He and Hannah would have fourteen children before her death in 1717, although only a few survived to adulthood.

He also entered local politics, and was elevated to the position of assistant magistrate in the judiciary that in 1692 judged the people in Salem accused of witchcraft. His diary recounts many of the more famous episodes of the Trials, such as the agonizing death under torture of Giles Corey, and reflects the growing public unease about the guilt of many of the accused. Sewall was perhaps most remarkable among the magistrates involved in the trials in that he was the only magistrate who, some years later, publicly regretted his role, going so far as to call for a public day of prayer, fasting, and reparations. In Salem, Sewall's brother Stephen had opened up his home to one of the initially afflicted children, Betty Parris, daughter of Salem Village's Reverend Samuel Parris, and shortly afterward Betty's "afflictions" appear to have subsided. 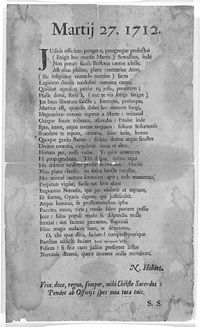 Sewall died in Boston, Massachusetts, on January 1, 1730, aged 77, and was interred in the family tomb at Boston's Granary Burying Ground.

Apart from his involvement in the Salem witch trials, Sewall was somewhat liberal in his views for the time. In The Selling of Joseph (1700), for instance, he came out strongly against slavery, making him one of the earliest colonial abolitionists. There he argued, "Liberty is in real value next unto Life: None ought to part with it themselves, or deprive others of it, but upon the most mature Consideration." He regarded "man-stealing as an atrocious crime which would introduce among the English settlers people who would remain forever restive and alien", but also believed that "There is such a disparity in their Conditions, Colour, Hair, that they can never embody with us, and grow up into orderly Families, to the Peopling of the Land." Although holding such segregationist views, he maintained that "These Ethiopians, as black as they are; seeing they are the Sons and Daughters of the First Adam, the Brethren and Sisters of the Last ADAM [meaning Jesus Christ], and the Offspring of God; They ought to be treated with a Respect agreeable."[citation needed]

His essay Talitha Cumi, first published in 1725, refers to the "right of women."[11] When the periwig became fashionable in New England, Sewall condemned the fashion vehemently, in contrast to Cotton Mather, who saw no reason why a Puritan should not wear a wig. Sewall's Journal, kept from 1673 to 1729, describes his life as a Puritan against the changing tide of colonial life, as the devoutly religious community of Massachusetts gradually adopted more secular attitudes and emerged as a liberal, cosmopolitan-minded community.[citation needed]

Works written by Sewall include:[13]