Gov. Pennypacker was born in Phoenixville, Pennsylvania, April 9, 1843; he was the son of Dr. Isaac A. Pennypacker and Anna Maria Whitaker, and the grandson of Matthias and Sarah Anderson (daughter of Isaac Anderson), and of Joseph and Grace Whitaker. He and his grandfather Whitaker witnessed Abraham Lincoln's speech outside Independence Hall in February 1861, standing 20 feet (6.1 m) away.[1] He received his education at the Grovemont Seminary at Phoenixville and at the West Philadelphia Institute.[2] He was the fourth great-grandson of Abraham op den Graeff.[3] His ancestor Heinrich Pannebäcker emigrated to Pennsylvania in 1702.[4]

Pennypacker's early education was interrupted several times. In 1863 he answered a call to arms by Governor Andrew Curtin during the Gettysburg Campaign of the American Civil War. He enlisted as a private in Company F of the 26th Pennsylvania Volunteer Militia and trained at Camp Curtin. He fought in the skirmish at Witmer Farm, north of Gettysburg on June 26, 1863, an action that saw his newly recruited regiment retreat to Harrisburg when confronted by veteran Virginia cavalry. He left the emergency militia in late July 1863 and resumed his education.

Pennypacker studied law at the University of Pennsylvania and opened his own law practice in 1866. In 1868, he was elected president of the Law Academy of Philadelphia.[2]

From 1876 to 1888 he was reporter-in-chief for the Court of Common Pleas No. 3.[4] In 1889 he was appointed judge of the Court of Common Pleas No. 2 and was elected for two terms of 10 years each, acting for several years (1896-1902) as president judge of that court.[2][5] In 1902, he soundly defeated Robert Pattison, who was seeking a third nonconsecutive term as governor. During his term in office, Pennypacker signed into law the Child Labor Act of 1905, setting a minimum age and standard for young workers. He created the Pennsylvania State Police and the State Museum, and oversaw the completion of the new state capitol building. He led a war on the easy divorce system of Pennsylvania.[2]

He also signed the Salus-Grady libel law, requiring newspapers to print the names of their owners and editors and making them responsible for negligence.[2] The Salus-Grady law also banned "any cartoon or caricature or picture portraying, describing or representing any person, either by distortion, innuendo or otherwise, in the form or likeness of beast, bird, fish, insect, or other unhuman animal, thereby tending to expose such person to public hatred, contempt, or ridicule." Pennypacker had been insultingly caricatured as a parrot during his campaign, mindlessly mimicking the words of his political bosses. The passage of this law was widely criticized, not least by Pennsylvania cartoonists who immediately began depicting political figures as inanimate objects and vegetables. The furor was observed nationwide, and the law was never enforced.[6]

In 1906, Pennypacker vetoed what would have been the first compulsory sterilization law in the United States.[7] At the time of the veto, Pennypacker stated:

"It is plain that the safest and most effective method of preventing procreation would be to cut the heads off the inmates, and such authority is given by the bill to this staff of scientific experts...Scientists like all men whose experiences have been limited to one pursuit...sometimes need to be restrained. Men of high scientific attainments are prone...to lose sight of broad principles outside of their domain...To permit such an operation would be to inflict cruelty upon a helpless class...which the state has undertaken to protect..." [8] 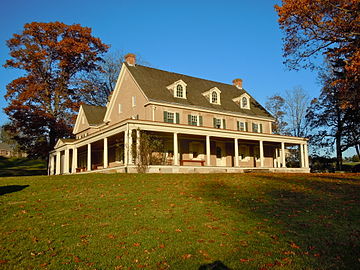 During his time in office, Pennypacker made his home in Schwenksville at Pennypacker Mills, a 170-acre (0.69 km2) farm and mansion that eight generations of Pennypackers lived in before it was eventually donated to Montgomery County and is now a historic park. He also used Moore Hall as a summer home.[9]

He married Virginia Earl Broomall in 1870. They had four children.[4] He died at Pennypacker Mills, aged 73, and was buried in Morris Cemetery, Phoenixville. Pennypacker Hall at the Penn State University Park campus is named for him, as is the Samuel W. Pennypacker School at Philadelphia.