From Infogalactic: the planetary knowledge core
Jump to: navigation, search
Not to be confused with Samuel Ward (minister).
For other people named Samuel Ward, see Samuel Ward (disambiguation). 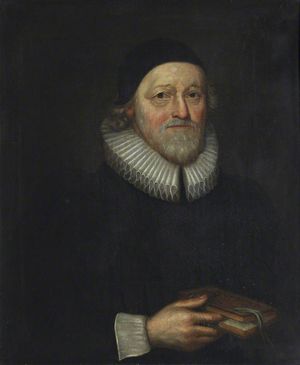 Samuel Ward (1572–1643) was an English academic and a master at the University of Cambridge. He served as one of the delegates from the Church of England to the Synod of Dort.

He was born at Bishop Middleham, county Durham. He was a scholar of Christ's College, Cambridge, where in 1592 he was admitted B.A. In 1595 he was elected to a fellowship at Emmanuel, and in the following year proceeded M.A. In 1599 he was chosen a Fellow of the new Sidney Sussex College.[1]

William Perkins entrusted to him for publication his treatise, Problema de Romanae Fidei ementito Catholicismo; Ward published it with a preface addressed to James I, to whom he was shortly afterwards appointed chaplain. Ward was one of the scholars involved with the translation and preparation of the King James version of the Bible. He served in the "Second Cambridge Company" charged with translating the Apocrypha. During this time he made the acquaintance of James Ussher, whom he assisted in patristic researches.

In 1610, Sidney elected him to the mastership of the college and he was created D.D., having been admitted B.D. in 1603. He was now recognised as a moderate with Calvinist views, strongly attached to the Church of England; Thomas Fuller, who was his pupil at Sidney Sussex College, found him consistent. In 1615 Ward was made prebendary of Wells Cathedral, and also archdeacon of Taunton. On 21 February 1618 he was appointed prebendary of York, and in the following year was one of the English delegates to the synod of Dort. Letters addressed to him there from Thomas Wallis, Gerard Herbert, Joseph Hall, and Arthur Lake survive. Simon Episcopius found him the most learned member of the synod.

In 1623 he was appointed Lady Margaret's Professor of Divinity in the university. He was one of the licensers of George Carleton's book against Richard Montagu's 'Appeale'; it was later suppressed by William Laud; and he appears to have himself taken part in the attack on Montagu, whose chaplain he had at one time been. He concurred in the censure of a sermon preached at Great St. Mary's by one Adams in 1627, advocating the practice of confession (Canterburies Doom, pp. 159–92); and when Isaac Dorislaus was appointed lecturer on history at Cambridge, he welcomed him. He appears also to have written in reply to the anti-Calvinistic treatise God's Love to Mankind by Henry Mason and Samuel Hoard. His college chapel remained unconsecrated.

When the First English Civil War broke out his sense of duty, as involved in his sworn allegiance to the crown, would not allow him to take the Solemn League and Covenant, and in consequence he became obnoxious to the presbyterian majority. In 1643, along with many others, he was imprisoned in St. John's College until, his health giving way, he was permitted to retire to his own college. He was attended during his last days by Seth Ward. On 30 August 1643, while attending the chapel service, he was seized with illness, an attack which terminated fatally on the 7th of the following September. His obsequies were formally celebrated on 30 November, when a funeral oration was pronounced in Great St. Mary's by Henry Molle, the public orator, and a sermon preached by Ward's friend and admirer, Ralph Brownrig. He was interred in the college chapel.

In 2015, an early draft manuscript of a portion of the King James Bible attributed to Ward was uncovered accidentally in an archive at Cambridge by Jeffrey Allen Miller of Montclair State University. Written in Ward's own handwriting and dating from 1604 to 1608, the manuscript shows portions of the Apocrypha with translation notes in Latin and Greek. Its discovery sheds light on the translation process used for the King James Bible, notably that many portions were at least initially translated independently and not collaboratively as was originally thought.[2]