From Infogalactic: the planetary knowledge core
Jump to: navigation, search
For other uses, see Whitbread (disambiguation). 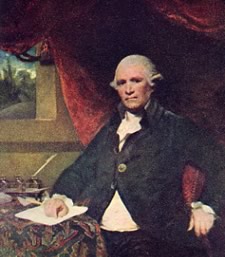 Samuel Whitbread was born at Cardington in Bedfordshire, the seventh of eight children. He left for London aged 14 and became an apprentice to a London brewer, John Witman.

He married firstly Harriet Hayton by whom he had two daughters, one of whom, Emma Maria Elizabeth Whitbread, married Henry St John, 13th Baron St John of Bletso and one son, the politician, Samuel Whitbread.

Whitbread became very rich and bought Lord Torrington's Southill Estate, Elstow Manor, and other substantial property.[2] When he died on 11 June 1796, the Gentleman's Magazine claimed that he was "worth over a million pounds".

Whitbread went into partnership with Thomas Shewell in 1742, investing £2,600 in two of Shewell's small breweries, the Goat Brewhouse (where porter was produced) and a brewery in Brick Lane (used to produce pale and amber beers).

Demand for the strong, black porter meant the business had to move to larger premises in Chiswell Street in 1750. Starting over, Whitbread invested in all the latest technology to industrialize production,[3] storing the beer in large vats. The brewery was also one of the first to employ a steam engine (purchasing a sun and planet gear engine, the Whitbread Engine, from James Watt's company in 1785).

By 1760, it had become the second largest brewery in London (producing almost 64,000 barrels annually). Five years later Whitbread bought out Shewell for £30,000. By the end of the century, Whitbread's business was London's biggest producer of beer, producing 202,000 barrels in 1796.

In May 1787 the brewery was visited by King George III and Queen Charlotte.

Whitbread was appointed High Sheriff of Hertfordshire for 1767–68 and elected Member of Parliament for Bedford in 1768, and held the seat until 1790,[4] and then represented Steyning from 1792 to 1796. He was an early supporter for the abolition of slavery, took part in some of the anti-slavery debates of 1788 in the House of Commons and introduced a minimum wage bill to the House in 1795, which was rejected by then Prime Minister William Pitt.[5]