Samuel Williams (1788–1853) was an English draughtsman and wood engraver.

Williams was born at Colchester, on 23 February 1788. He was apprenticed to the Colchester printer J. Marsden, but taught himself to draw and engrave on wood, and adopted engraving as his profession. He established himself in Colchester, then in 1819 settled in London.[1]

In the early part of his life Williams also painted miniatures, and a few oil pictures. He became known as a wood engraver, a specialist in landscapes. Also having a facility in design, he used his own drawings for a high proportion of his cuts. His first patron was Benjamin Crosby the publisher, for whom he illustrated a work on natural history in 1810.[1]

He was elected a member of the American Antiquarian Society in 1819.[2] 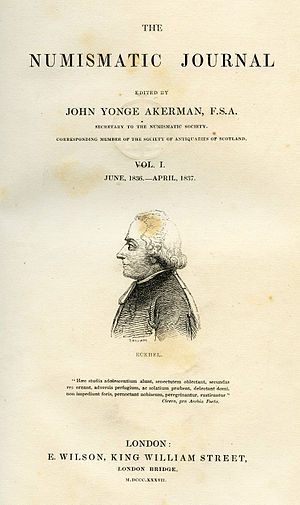 Engraving of the numiscatist Joseph Hilarius Eckhel by Williams on the first front page of The Numismatic Journal, about 1837

From his own designs, Williams produced the illustrations to:[1]

Cuts from the designs of others are in:[1]

Williams left four sons, and they all practised wood engraving with success. Thomas Williams (fl. 1830), his younger brother, was his pupil, and a wood engraver who worked only from the designs of others. His engravings are to be found in James Northcote's Artist's Book of Fables 1828; and John Martin and Richard Westall's Bible Illustrations, 1833.[1]