From Infogalactic: the planetary knowledge core
(Redirected from Samuel Youd)
Jump to: navigation, search
This article is about the British author. For the American herbalist, see John Christopher (herbalist).

Sam Youd (16 April 1922 – 3 February 2012), known professionally as Christopher Samuel Youd, was a British writer, best known for science fiction under the pseudonym John Christopher, including the novels The Death of Grass, The Possessors, and the young-adult novel series The Tripods. He won the Guardian Prize in 1971[1] and the Deutscher Jugendliteraturpreis in 1976.

Sam Youd was born in Huyton, Lancashire (though Youd is an old Cheshire surname). He adopted the name Christopher Samuel Youd for his professional writings, leading to the widespread but mistaken belief that that was his birth name. Throughout his life he was known simply as Sam to his friends and acquaintances.

Youd was educated at Peter Symonds' School in Winchester, Hampshire, then served in the Royal Corps of Signals from 1941 to 1946. A scholarship from the Rockefeller Foundation made it possible for him to pursue a writing career, beginning with The Winter Swan (Dennis Dobson, 1949), published under the name Christopher Youd. He wrote science fiction short stories as John Christopher from 1951[2] and his first book under that name was a science fiction novel, Year of the Comet, published by Michael Joseph in 1955.[2] John Christopher's second novel, The Death of Grass (Michael Joseph, 1956) was Youd's first major success as a writer. It was published in the United States the following year as No Blade of Grass (Simon & Schuster, 1957). An American magazine published Year of the Comet later that year and it was issued in 1959 as an Avon paperback entitled Planet in Peril.[2] Youd continued to use the pen name John Christopher for the majority of his writing and all of his science fiction .[2] The Death of Grass has been reissued many times, most recently in the Penguin Modern Classics (2009).[2]

In 1966 Youd started writing science fiction for adolescents, using the name John Christopher in every case. The Tripods trilogy (1967–68), The Lotus Caves (1969), The Guardians (1970) and the Sword of the Spirits trilogy (1971–72) were all well received. He won the annual Guardian Children's Fiction Prize for The Guardians.[1] In 1976 he won the Deutscher Jugendliteraturpreis, youth fiction category, for the same novel in its German translation, Die Wächter.

Youd died in Bath, Somerset, on 3 February 2012 of complications from bladder cancer.[4][5]

The Death of Grass was adapted as a film by Cornel Wilde under its American title, No Blade of Grass (1970). The Tripods was partially developed into a British TV series. It is in development as a film (2012).[6] Empty World was developed into a 1987 TV movie in Germany, Leere Welt. The Guardians was made into a 1986 TV series in Germany, Die Wächter. The Lotus Caves was in development in 2007, as a film from Walden Media, to have been directed by Rpin Suwannath.[7][8] Later, in 2013, a TV pilot based loosely on the Lotus Caves was developed by Bryan Fuller and titled "High Moon." The pilot did not ultimately get picked up as a series, but the pilot was released on SyFy and Netflix in 2014.

Except where explained otherwise, all listings are novels and novellas published as books. 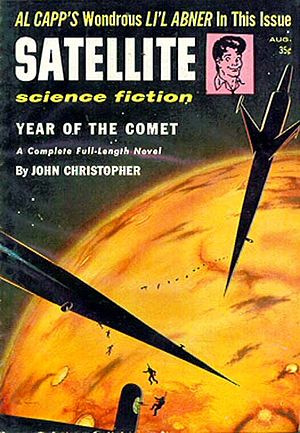 Christopher's novel The Year of the Comet saw its first U.S. publication in the August 1957 issue of Satellite Science Fiction 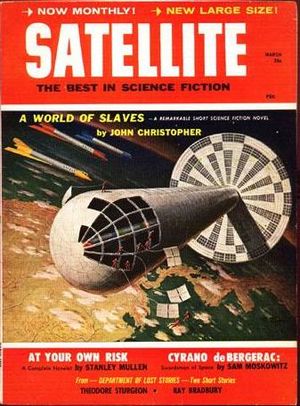