San Anton Palace (Maltese: Palazz ta' Sant'Anton), known officially as San Antonio,[1] is a palace located in Attard, Malta. It is the official residence of the President of Malta, and is surrounded by both private and public gardens.[2]

The San Anton Palace and its Gardens owe their origin to the Knight Antoine de Paule, a French knight from the Langue de Provence, who was elected 54th Grand Master of the Order of St. John in 1623. As Grand Master, de Paule, who also founded Paola in 1626, acquired a sizeable plot of land near Attard and set about building a country villa which was nearer to Valletta than Verdala Palace.[3][4]

He planned the villa on generous proportions so as to provide accommodation for his guests and for his large domestic staff which included cooks, food tasters, torch bearers, pantry boys, wig makers, a winder of the clocks, and physicians, as well as a baker to make black bread for feeding his hunting dogs. The Grand Master named the villa ‘Sainte Antoine’ after his patron saint, Anthony of Padua.[5][6]

De Paule also provided the palace with a private chapel dedicated to the Madonna del Pilar with a vault decorated with the coats-of-arms of Grand Masters especially Emmanuel de Rohan-Polduc. De Paule also designed a symmetrical plan to the garden that consisted of more orange groves in the beginning. These oranges, he sent as gifts to those he desired to honour. A mausoleum dedicated to Grand Master de Paule may be found at St. John's Co-Cathedral in Valletta in the Chapel of the Langue of Provence.[7][8]

Successive Grand Masters were to use the place as their country-residence. After the French occupation of Malta and the Maltese rebellion, the Palace was the seat of the Maltese National Assembly from February 1799 to the departure of the French in September 1800. It was later to become the residence of the Governor and of the Governor-General of Malta. Since 1974 Sant'Anton Palace has been the Official residence of the President of Malta.[9][10] 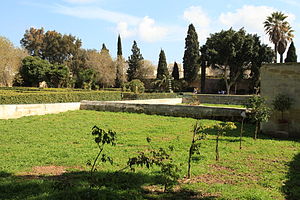 The gardens of San Anton, part of which have been open to the public since 1882, are laid out in a formal manner, with graceful walkways, sculptures, ornamental ponds, families of ducks and swans, and a small aviary.[12]

The gardens contain a large variety of trees and flowers from around the world, including a variety of palm trees, cypress, jacarandas, araucarias and other exotic plants, some of them over three centuries old. For many years it has been customary for visiting Heads of State to plant a tree in memory of their stay in Malta. The gardens also contain an orangery, and it was once the practice of incumbent Governors to give baskets of oranges grown in the palace gardens as gifts at Christmas time.[13][14][15]

A number of significant annual events are held at San Anton Gardens, including the Malta Horticultural Show, and open-air theatre, dance and musical performances.[16]

The Malta Community Chest Fund organization is a charity organization under the leading role of the President of Malta. Several events take place, to a wide society, at San Anton Palace to collect money, for local NGO's and individuals, who will come in need from the community organization.[17]

The President's Kitchen garden is found right outside San Anton Palace. While not being physically part of the palace, it is part of the property of the palace and under the President of Malta. The place offers a privately contracted food retreat place of which 10% of the sum paid for everything purchased goes to the Malta Community Chest Fund. The place is found few metres away from the palace, dividing them is a street and not far from Villa Bologna.[18]

Queen Elizabeth II in her capacity as Head of the Commonwealth of Nations has often visited Malta. In 2005, the Queen stayed at San Anton palace during her visit to Malta, just as she did during other Royal visits, including those in 1954 and in 1967.[19]

San Anton Place and Gardens were scheduled by the Malta Environment and Planning Authority (MEPA) as a Grade 1 national monument as per Government Notice number 1082/09 in the Government Gazette (December 22, 2009).[20] They are also listed on the National Inventory of the Cultural Property of the Maltese Islands.[21]