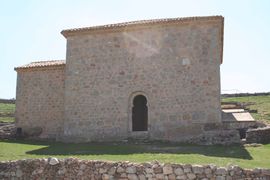 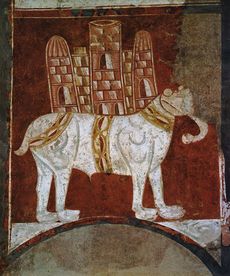 The Hermitage of San Baudelio de Berlanga (Ermita de San Baudelio de Berlanga) is an early 11th-century church situated at Caltojar, province of Soria, Spain, 80 km south of Berlanga de Duero. It is an example of Mozarabic architecture and was built in the 11th century, in what was then the frontier between Islamic and Christian lands. [1] It is dedicated to Saint Baudilus or Baudel.

The hermitage housed many fine Romanesque frescoes from about 1125; most of these have been removed, but some have remained. Two sections, transferred to canvas, are now in the Indianapolis Museum of Art, showing the Entry of Christ into Jerusalem and the Wedding at Cana.[2] Other sections, including the The Healing of the Blind Man and the Raising of Lazarus and The Temptation of Christ are in the Metropolitan Museum of Art in New York,[3] and in the Prado. The paintings were done by the Catalan Master of Tahull (Taüll in Catalan), whose best known works are in Sant Climent de Taüll and the Museu Nacional d'Art de Catalunya in Barcelona,[4] with two other painters. The scenes of the Life of Christ are unusual in Spanish painting at this period; these are in American museums, while smaller elements including scenes of hunting and falconry and decorative copies of textiles are in Madrid as well as New York.[5] The frescoes include that of a camel and of a war elephant, which were inspired by Muslim motifs.[1]