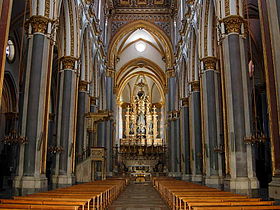 San Domenico Maggiore is a church in Naples, southern Italy, founded by the friars of the Dominican Order, located in the square with the same name. The square is bordered by a street/alleyway popularly called "Spaccanapoli" (presently labeled via Benedetto Croce at this particular section of its considerable length) in the historic center of Naples. It was one of the three main east-west streets of the original Greek city of Neapolis. To the east along Spaccanapoli, one reaches in a few blocks the Piazza of Gesu Nuovo and Santa Chiara.

In the center of the square is an obelisk— one of three "plague columns" in Naples—topped by a statue of Saint Dominic, founder of the Dominican Order, erected after the plague of 1656. The original designer of the spire was the Neapolitan architect Cosimo Fanzago. Construction on the spire was started after the plague of 1656 and was finally finished in 1737 under Charles III, the first Bourbon monarch of Naples.

The Church of San Domenico Maggiore incorporates a smaller, original church built on this site in the 10th century, San Michele Arcangelo a Morfisa.

Charles II of Naples began the rebuilding that produced the new Church of San Domenico Maggiore. The work was done between 1283 and 1324, but the church has undergone modifications over the centuries, including one in 1670 that recast the structure in the style of the Baroque. In the 19th century, however, the church was restored to its original Gothic design.

The monastery annexed to the church has been the home of prominent names in the history of religion and philosophy. It was the original seat of the University of Naples, where Thomas Aquinas, a former member of the Dominican community there, returned to teach theology in 1272. After Matins on December 6 of 1273 Aquinas lingered in the Chapel of Saint Nicholas and was seen by the sacristan Domenic of Caserta to be levitating in prayer with tears before an icon of the crucified Christ. Christ said to Thomas, "You have written well of me, Thomas. What reward would you have for your labor?" Thomas responded, "Nothing but you Lord." [1]

The philosopher friar and heretic, Giordano Bruno, also lived here at some point.

Artistically, the most notable feature are the frescoes by Pietro Cavallini in the Brancaccio Chapel (1309), depicting Stories of St. John the Evangelist, Crucifixion, Stories of Magdalene and the Apostles Peter, Paul and Andrew.

The sacristy houses a series of 45 sepulchres of members of the royal Aragonese family, including that of King Ferdinand I. The remains of the Blessed Raymond of Capua, a former Master General of the Dominican Order, also rest there.

The plaza is ringed by palaces from prominent families, including the Palazzo di Sangro di Casacalenda, Naples.