Proposition H was a local ordinance on the November 8, 2005 ballot in San Francisco, California, which gained national attention for its banning of most firearms within the city. The measure passed with a yes vote of 123,033 to a no vote of 89,856. The proposition was later struck down in court.

Proposition H sought to restrict handgun possession among San Francisco residents within city limits to police and certain security professionals, and to ban the manufacture, distribution, sale and transfer of firearms and ammunition within the city. Limited exceptions to the proposition would have allowed residents to possess handguns only if required for specific professional purposes. For example, San Francisco residents who are security guards, peace officers, or active members of the U.S. armed forces would be permitted to possess handguns while on duty. The San Francisco Board of Supervisors enacted penalties for violation of this ordinance, including mandatory jail time. Until April 1, 2006, residents would have been able to surrender their handguns to any district station of the San Francisco Police Department or the San Francisco Sheriff's Department without penalty (no refund of buying cost was planned).

The measure was placed on the ballot with supporting signatures from Supervisors Tom Ammiano, Chris Daly, Bevan Dufty and Matt Gonzalez.[1]

Results at the polls

The City population of San Francisco is at least 805,235, without counting people not registered, or travelling/working in the metro area.[2] 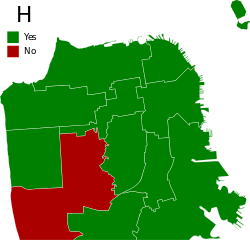 Demise in the courts

Proposition H would have taken effect January 1, 2006, but enforcement was suspended by litigation.

On June 13, 2006, in the case of Fiscal v. City and County of San Francisco (Case No. CPF-05-505960), San Francisco Superior Court Judge James Warren struck down the ban, saying local governments have no such authority under California law. Judge Warren sided with the National Rifle Association, Second Amendment Foundation, and other petitioners represented by Chuck Michel of Trutanich-Michel, LLP, in Long Beach, California, who sued on behalf of gun owners, advocates and dealers the day after the measure passed.[3] Judge Warren wrote in his 30-page ruling that "Proposition H is adjudged invalid as preempted by state law."[1]

The judge's decision was not without precedent considering a California appeals court nullified an almost identical San Francisco gun ban on exactly the same grounds in 1982.[4]

The City appealed Judge Warren's ruling, but lost by a unanimous decision from the three judge panel in the Court of Appeals issued on January 9, 2008. On February 19, 2008, San Francisco asked the California Supreme Court to review Court of Appeal's decision. The state Supreme Court reached a unanimous decision on April 9, 2008 that rejected the city's appeal and upheld the lower courts' decision.

In October 2008, San Francisco was forced to pay a $380,000 settlement to the National Rifle Association and other plaintiffs to cover the costs of litigating Proposition H.[5]