The name of San Fratello derives from three pious brothers Alfio, Cirino and Filadelfio. In their honour a festival is held annually on 10 May. The village was founded in the 11th century by Adelaide del Vasto, the wife of Roger I, a noble of present-day French Normandy who conquered Sicily. She came to Sicily together with colonists.[3] They introduced their Gallo-Italic dialect, which is still spoken in the village. San Fratello is one of the so-called Oppida Lombardorum of Sicily, settlements established by the Lombards. In addition to their language, they brought Latin Christianity, which gradually replaced the Greek Byzantine Christianity and Islam.

The territory of the comune is part of the Nebrodi mountains. It has had two major landslides of record. The first was in 1754, and a second large one occurred in 1922. On 1–2 October 2009, the province of Messina suffered devastating, widespread mudslides after a sudden heavy rainstorm; scores of residents died.

In February 2010, after a period of large amounts of rain in the Messina region, as a safety precaution, officials evacuated one-third of the population by 14 February. An extensive landslide soon after caused damage to homes in San Fratello and the region. 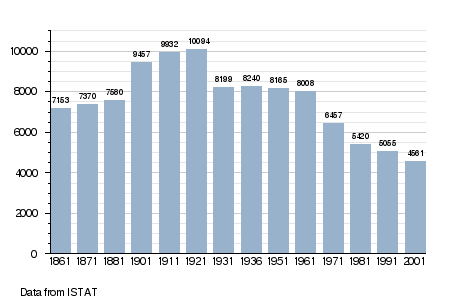 In the early twentieth century, many people emigrated from Sicily, especially to the United States, for work and other opportunities. From its peak population of 10,094 in 1921, San Fratello lost nearly 20 percent of its population in the next decade. Decline has continued in the rural area as people go to cities to work.