Its central library, Dr. Martin Luther King Jr. Library, is also the main library of the San José State University. Built in 2003, King Library is the first joint use library in the United States shared by a major university as its only library and a large city as its main library. It has more than 1.6 million items. The building has eight floors that result in more than 475,000 square feet (44,100 m2) of space with a capacity for 2 million volumes.[2]

The city has 23 neighborhood branches including the Biblioteca Latinoamericana which specializes in Spanish language works.[3] The East San José Carnegie Branch Library, a Carnegie library opened in 1908, is the last Carnegie library in Santa Clara County still operating as a public library and is listed in the National Register of Historic Places. As the result of a bond measure passed in November 2000, a number of brand new or completely reconstructed branches have been completed and opened. The brand new Village Square Branch Village Square Branch is under construction, bringing the bond library project to its completion.[4]

The San José system (along with the University system) were jointly named as "Library of the Year" by the Library Journal in 2004.[5] 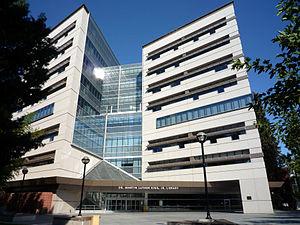