The San Jose Mercury News is an American daily newspaper, published in San Jose, California. It is owned by Media News Group. The Mercury News encompasses all other Bay Area newspapers owned by Media News Group, including the Oakland Tribune, Contra Costa Times, Marin Independent Journal, San Mateo County Times, Santa Cruz Sentinel, and 10 other local daily newspapers, each of which are branded as "an edition of the San Jose Mercury News," which accounts for the newspaper's high circulation. 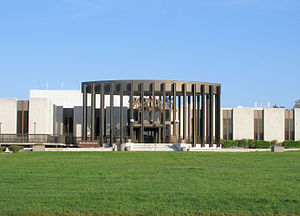 Mercury News headquarters (1967-2014)
File:SJMerc wb elf.jpg
Sections vary by day of the week, but Business, Sports, and The Valley are standard daily fare.

The paper says that the name "Mercury" refers to the importance of the mercury industry during the California Gold Rush, when the city's New Almaden Mines (now Almaden Quicksilver County Park) were the largest producer of mercury in North America. The name has a dual meaning, as Mercury is the Roman messenger of the gods as well as the god of commerce and thieves, known for his swiftness, and the name Mercury is commonly used for newspapers without the quicksilver association.

Because of its location in Silicon Valley, the Mercury News has covered many of the key events in the history of computing.

Ridder bought the Mercury and News in 1952. Ridder merged with Knight to form Knight Ridder in 1974.

On March 13, 2006 The McClatchy Company announced their agreement to purchase Knight Ridder. McClatchy decided that it would be expedient to explore the immediate resale of the Mercury News.[3]

On April 26, 2006 it was announced that Denver-based MediaNews Group would buy the Mercury News.[4] However, on June 12, 2006, federal regulators from the U.S. Department of Justice asked for more time to review the purchase, citing possible anti-trust concerns over MediaNews' ownership of other newspapers in the region. Although approval by regulators and completion of MediaNews' acquisition was announced on August 2, 2006, a lawsuit claiming antitrust violations by MediaNews and the Hearst Corporation had also been filed in July 2006.[5]

The suit, which sought to undo the purchase of both the Mercury News and the Contra Costa Times, was scheduled to go to trial on April 30, 2007. While extending until that date a preliminary injunction which prevented collaboration of local distribution and national advertising sales by the two media conglomerates, U.S. District Judge Susan Illston on December 19, 2006 expressed doubt over the legality of the purchase.[6] On April 25, 2007, days before the trial was scheduled to begin, the parties reached a settlement in which MediaNews preserved its acquisitions.[7]

In September 2014 the Mercury News moved to downtown San Jose, leaving its purpose-built headquarters that opened in 1967. Cited as reasons for the move were that the printing presses were no longer on site and the staff reductions that had occurred over the years.[8]

The paper's local coverage and circulation is concentrated on the entire Bay Area, plus Santa Cruz County and excluding San Francisco and Sonoma County. Tim Kawakami has been a sports writer for the paper for a number of years [9]

The newspaper has earned several awards, including two Pulitzer Prizes, one in 1986 for reporting regarding political corruption in the Ferdinand Marcos administration in the Philippines, and one in 1990 for their comprehensive coverage of the 1989 Loma Prieta earthquake. Assistant managing editor David Yarnold was also a Pulitzer Prize finalist in 2004 for a local corruption investigation.[10] The Mercury News was also named one of the five best-designed newspapers in the world by the Society for News Design for work done in 2001.

In August 1996 the Mercury News published "Dark Alliance," a series of investigative articles by reporter Gary Webb. The series claimed that members of the Nicaraguan Contras, an anti-government group organized with the help of the Central Intelligence Agency, had been involved in smuggling cocaine into America to support their struggle, and as a result had played a major role in creating the crack-cocaine epidemic of the 1980s. The series sparked three federal investigations, but other newspapers such as the Los Angeles Times later published articles suggesting that the series claims were overstated. Executive editor Jerry Ceppos, who had approved the series, eventually published a column that acknowledged shortcomings in the series reporting, editing, and production, while maintaining the story was correct "on many important points."[11]