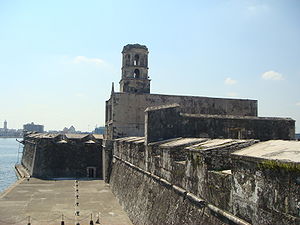 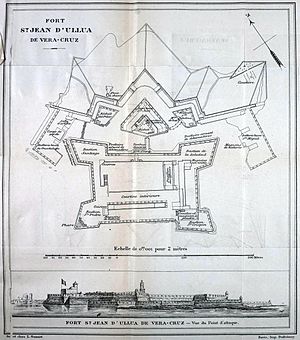 San Juan de Ulúa, also known as Castle of San Juan de Ulúa, is a large complex of fortresses, prisons and one former palace on an island of the same name in the Gulf of Mexico overlooking the seaport of Veracruz, Mexico. Juan de Grijalva's 1518 expedition named the island. On Easter Sunday 1519, Hernan Cortés met with Tendile and Pitalpitoque, emissaries from Moctezuma II's Aztec Empire.[1]:89[1]:36,38,89

The fort was built in the Spanish colonial New Spain era, with construction starting in 1565. It was expanded several times later. 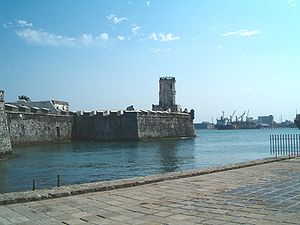 The fortress overlooking the Port of Veracruz

In 1568, the Spanish Navy succeeded in trapping the English fleet of Sir John Hawkins, including his cousin, the young Francis Drake, at San Juan de Ulúa. The English barely escaped, a humiliating experience that affected Drake's later career.

Richard Hakluyt's book, The Principal Navigations, Voiages, Traffiques and Discoueries of the English Nation (1598–1600), claims Drake and Hawkins were on a private venture, peacefully trading with the local Spanish colonists in violation of Spanish law, when the Spanish naval fleet arrived. Despite suspicion of treachery, they allowed the Spaniards to take shelter under truce, between San Juan de Ulúa island, on an otherwise open coastline. The attack by the Spanish was a surprise.

Historians know that Drake and Hawkins likely had raided Spanish settlements elsewhere on that voyage. The trade was in African slaves, who had been captured and taken earlier from West Africa. On this occasion, it appears the English were in fact trading at Vera Cruz. Historians have speculated that the Spanish colonists traded with them illegally under their threat of raids and attacks.[2]

Hawkins and Drake escaped in the ships Minion and Judith,, while their larger ships were taken or destroyed. The attack and subsequent hardships were instrumental in hardening Drake's attitude against Spain and Catholicism. Earlier in his life, he and his family had been forced to live in poverty after they were displaced by a Catholic rebellion in England.

After Mexico's independence in 1821, a large number of Spanish troops continued to occupy San Juan de Ulúa as late as 1825. It was the last site in the former New Spain to be held by Spain and was surrendered to General Miguel Barragán in November 1825. The Spanish forces were expelled by President Vicente Guerrero after the failed attempt at re-conquering the country.

Since then, San Juan de Ulúa served as a military and political symbol of Mexican resistance to foreign invasions and occupations, several of which took place during the nineteenth century. In 1836 the French invaded and occupied to put pressure on the national government; during the Mexican–American War, in 1848 the U.S. occupied the fort and Veracruz, and in 1863 the French briefly occupied the city when installing Maximilian I as emperor. For much of the nineteenth century, the fort served as a prison, especially for political prisoners judged to be opposition to the government. Many prominent Mexican politicians spent time here while they were not in power.

Finally in 1914, the last U.S. invasion, attack and occupation of the port of Veracruz took place as part of the Tampico Affair, against the background of the Mexican Revolution which threatened the regional oil industry, in which Americans were heavily invested. The national legislature awarded the port and city of Veracruz the title of Heroic for the fourth time following this incident.

A portion of San Juan de Ulúa also served several times as the presidential palace, housing presidents such as Benito Juárez and Venustiano Carranza. The citadel was also used as a prison, especially during the early 20th-century regime of President Porfirio Díaz. It is popularly said that in order to prevent prisoners from escaping, sharks were put into the waters surrounding the island, so that they would kill anyone attempting to escape.

The worst pesthole in Veracruz,[3] though not so evident to the public eye, was the prison of San Juan de Ulúa. For several days after the port had been occupied, the Americans made no attempt to take the fortress. Incongruously, the Mexican flag was raised and lowered each day by the garrison of the fort, this with the gunboat Prairie anchored but a few yards away. After three days, however, a party of marines from North Dakota rowed over to the island to take charge of the fort. The Mexican commander was pleased to surrender, for there was little food left. His men had nothing to eat, he said, but black bean soup. At the order of the marine commander he threw back the great iron gates to the cell area. To the Americans it was as though a hole had suddenly been opened into Dante’s Inferno. Several hundred men were huddled together in a series of cavernlike cells, each about forty feet long and fifteen feet wide. The marines were almost overcome by the stench and the maniacal outcries of the prisoners. The convicts were filthy and in rags, for each man wore the clothing he had brought with him. Many had chronic malaria and tuberculosis; nearly all had chronic diarrhea or other enteric ailments. The condition of the political prisoners, the men who had tried to escape military service, was bad enough. But In another hole, where the criminal prisoners were incarcerated, it was even more foul. The men inside were like animals. There were no toilets in any of the cells, or in the cell area, and rats, cockroaches, spiders, and fleas infested the whole prison.

By orders of General Funston the political prisoners were given their freedom. Some returned to their homes in various parts of the Republic; others, who feared retaliation by Huerta’s government, preferred to remain in Veracruz. Only those criminal prisoners who, in the judgment of the military government, had been justly convicted, were kept in custody, and these were transferred to better and more sanitary quarters in the city jail.

The cleanup of the prison was a more prodigious job than that of the market, requiring the labor of marines, sailors, and prisoners for several weeks. The walls and floors were scraped down, steamed, washed with creolin, and flushed out with firehoses. The vermin were exterminated with sulphur fumes; in all the Americans burned 1,200 pounds of sulphur. So foul were the deepest dungeons that the prisoners who worked there, performing the most noxious tasks, worked in shifts so as not to be nauseated by the odors. When the sanitary officers were finally satisfied with the condition of the prison, the cells were sealed off. The fort was used thereafter as a barracks for the marines and soldiers.

The fortress complex was ultimately closed when no longer needed for sea defense. After several years of decay, renovation was begun on the complex in the late 20th century. Some projects are continuing. San Juan de Ulúa has been preserved and adapted as a museum. The prisons and the fortresses are all open to the public, with the exception of the former presidential palace, which suffered severe decay and is still undergoing renovations. The complex is a very popular tourist attraction.