The Stadio Giuseppe Meazza, commonly known as San Siro, is a football stadium located in the San Siro district in Milan. It is the home of A.C. Milan and Inter Milan. It has an all-seater capacity of 80,018 making it one of the top ten largest stadia in Europe, and the largest stadium in Italy.

Construction of the stadium commenced in 1925 in the district of Milan named San Siro, with the new stadium originally named "Nuovo Stadio Calcistico San Siro" (San Siro New Football Stadium).[7] The idea to build a stadium in the same district as the horse racing track belongs to the man who then was the president of AC Milan, Piero Pirelli. The architects designed a private stadium only for football, without the athletics tracks which characterized Italian stadiums built with public funds.[8] The inauguration was on 19 September 1926, when 35,000 spectators saw Inter Milan defeat Milan 6–3. Originally, the ground was home and property of AC Milan. Finally, in 1947, Inter, who used to play in the classy Arena Civica downtown,[9] became tenants and the two have shared the ground ever since.

As well as being used by Milan and Inter, the Italian national team also plays occasional games there and it has also been used for the 1965, 1970, and 2001 UEFA Champions League finals. The stadium was also used for Inter Milan's UEFA Cup finals when played over home and away legs but has never featured since the competition changed to a single final structure in 1997–98. The stadium has been chosen by UEFA to host the 2016 Champions League Final.[10]

Inter is in the process of new stadium feasibility studies.

The first rugby union international at the San Siro took place when Italy played New Zealand in the 2009 end of year rugby tests. 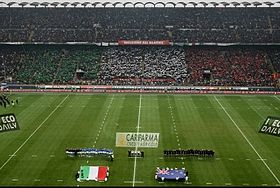 Other than football matches, the San Siro has been host to many music concerts.

Bob Marley performed the first concert in the history of San Siro Stadium on 27 June 1980, in front of an all-time Italian record audience of about 120,000 people, which was also a European audience record for a music concert in an enclosed venue at that time.

Genesis and Paul Young performed at the stadium on 19 May 1987 during their Invisible Touch Tour.

Duran Duran performed at the stadium on 5 June 1987 during their Strange Behaviour Tour.

David Bowie performed on 10 June 1987 during the Spider Glass Tour.

Michael Jackson performed on 18 June 1997 during his HIStory World Tour in front of a crowd of about 70,000 people. This concert was the first and only Jackson solo performance in Milan.

Red Hot Chili Peppers performed at the stadium on 8 June 2004 during their Roll on the Red Tour.

In 2006, Robbie Williams performed in front of a crowd of about 70,000 people during his Close Encounters Tour. He performed at San Siro again on 31 July 2013 as part of his Take The Crown Tour

On 2 June 2007, Italian singer Laura Pausini was the first woman ever to sing at the stadium, breaking all records for sold-out concerts. The performance was later released as the live album San Siro 2007. Two years later, on 21 June 2009, following the 2009 L'Aquila earthquake, Pausini organized a concert in which she and 42 more singers (all women) performed to raise money for charity institutions in the L'Aquila area. This concert was later released on the DVD "Amiche per l'Abruzzo".[14]

Negramaro performed at the venue for the second time on 13 July 2013.

Depeche Mode performed at the stadium two times: the first one was on 18 June 2009 during their Tour of the Universe, in front of a crowd of 57,544 people. The second one was on 18 July 2013 during their Delta Machine Tour, in front of a sold out crowd of 57,919 people. The 2009 show was recorded for the group's live albums project Recording the Universe.

In 2011, Take That performed a show during their Progress Live tour.

One Direction, performed on 28 and 29 June 2014 during their Where We Are, in front of a sold out crowd. Both shows were recorded for the group's third movie "One Direction: Where We Are - The Concert Film".

San Siro during a concert of Italian rockstar Vasco Rossi

San Siro was the venue for the boxing match between Duilio Loi vs. Carlos Ortiz for the Junior Welterweight title in 1960.

In November 2009, Italy played New Zealand in rugby in front of a sold out crowd of 80,000, a record for Italian rugby. The score finished at 20–6 in the All Blacks' favour.

The stadium is located in the northwestern part of Milan. It can be reached by underground via the dedicated San Siro metro station (at the end of the "lilac" line 5), located just in front of the stadium,[15] or by tram, with line 16 ending right in front. The Lotto metro station (line 1, the "red line", and line 5) is about 15 minutes walk away from San Siro.

In the stadium there is also a museum about AC Milan and Inter Milan's story with historical shirts, cups and trophies, shoes, art objects and souvenirs of all kinds.

Panorama of the stadium

The stadium was one of the venues of the 1990 FIFA World Cup, and held six matches. The first was a Group B match between Argentina and Cameroon who stunned Argentina 1 - 0. The other matches involved Germany. All their Group D matches (a 4 - 1 win over Yugoslavia on June 10, a 5 - 1 win over the United Arab Emirates on June 15 and a 1 - 1 draw with Colombia on June 19), their Round of 16 match against the Netherlands winning 2 - 1 on June 24 and their Quarter-finals against Czechoslovakia winning 1 - 0 on July 1.