From Infogalactic: the planetary knowledge core
Jump to: navigation, search
In this Japanese name, the family name is Sanada.

Sanada Yukimura (真田 幸村?, 1567 – June 3, 1615), actual name: Sanada Nobushige (真田 信繁?), was a Japanese samurai warrior of the Sengoku period. He was especially known as the leading general on the defending side of the Siege of Osaka.

Yukimura was called "A Hero who may appear once in a hundred years", "Crimson Demon of War" and "The Last Sengoku Hero." The famed veteran of the invasion of Korea, Shimazu Tadatsune, called him the "Number one warrior in Japan" (日本一の兵?).[1][2]

He was the second son of Sanada Masayuki (1544–1611). His elder brother was Sanada Nobuyuki. He was married to Akihime (Chikurin'in), a foster-daughter of Ōtani Yoshitsugu. They had two sons, Daisuke (Yukimasa) and Daihachi (Morinobu).[citation needed]

In 1575, the Battle of Nagashino claimed the lives of two of Sanada Masayuki's elder brothers. Masayuki, previously serving Takeda Shingen and Takeda Katsuyori as a retainer, inherited the Sanada clan and left for Ueda Castle. Yukimura also went, taking the Sanada name as well.[citation needed]

By 1582, the Oda-Tokugawa forces had destroyed the Takeda clan. The Sanada initially surrendered to Oda Nobunaga, but, after the Incident at Honnōji, it became independent again, drifting between stronger daimyo such as the Uesugi clan, the Late Hōjō clan, and the Tokugawa clan. Eventually, the Sanada clan became a vassal of Toyotomi Hideyoshi.[citation needed]

Battle of Sekigahara and exile

In 1600, before the Battle of Sekigahara, Tokugawa Ieyasu rallied various daimyo to attack Uesugi Kagekatsu. The Sanada clan complied as well, but when Ishida Mitsunari decided to challenge Ieyasu, Masayuki and Yukimura joined the western forces, parting ways with Masayuki's eldest son and Yukimura's brother, Nobuyuki (真田 信之, originally 真田 信幸), who joined the eastern forces. It has been said that at first Yukimura followed Ieyasu but, after Ieyasu tried to seize his territory he betrayed Ieyasu. The true motive of Masayuki and Yukimura's decision is disputed with many theories, but there are two main schools of thought: in one, Masayuki made the decision (and Yukimura agreed); he expressed the willingness to take a gamble, so that if he were to join the weak side and win the battle, the Sanada would gain much more power. The other theory is the opposite where they planned a safety net; Masayuki, Yukimura, and Nobuyuki discussed the situation when Ieyasu asked them to state their allegiance clearly, and they decided to join separate sides, so that, regardless of the outcome of the battle, the Sanada clan would survive.

The Sanada retreated and fortified Ueda Castle. When Tokugawa Hidetada marched a sizable army on the Nakasendō, the Sanada resisted and were able to fight Hidetada's 40,000 men with only 2,000. However, as the castle did not fall in the short time that he expected, Hidetada gave up and joined the main Tokugawa army, too late, however to participate in the crucial Battle of Sekigahara. After the battle Masayuki's territory was seized and he and Yukimura were exiled to Mt. Koya in the Kii Peninsula. Ueda was given to Nobuyuki. Yukimura rose against the Tokugawa when the Winter Battle of Osaka Castle broke out in 1614. 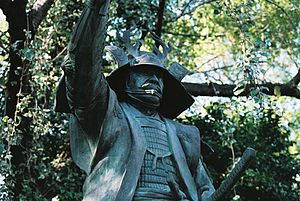 The siege of Osaka Castle was a series of battles undertaken by the Tokugawa shogunate against the Toyotomi clan, and ending in that clan’s destruction. Divided into two stages (Winter Campaign and Summer Campaign), lasting from 1614 to 1615, the siege put an end to the last major armed opposition to the shogunate’s establishment. The end of the conflict is sometimes referred to as the Genna Armistice (Genna Embu), because the era name was changed from Keichō to Genna immediately following the siege.

On November 19, Tokugawa forces (approx. 3,000 men) attacked a fort across the Kizu River, destroying it. A week later, Tokugawa forces attacked the village of Imafuku with 1,500 men against a defending force of 600. With the aid of a squad of arquebusiers, the Tokugawa claimed victory once again. Several more small forts and villages were attacked before the siege on Osaka Castle itself began on December 4, 1614. Yukimura built a small fortress called Sanada-maru in the southwest corner of Osaka Castle. The Sanada-maru was an earthwork barbican defended by 7,000 men under Yukimura's command.[citation needed] From there, he defeated the Tokugawa forces (approx. 30,000 men) with groups of 6,000 arquebusiers.[citation needed] The Shogun's forces were repeatedly repelled, and the Sanada troops launched a number of attacks against the siege lines, breaking through three times. Ieyasu then resorted to artillery, which included 17 imported European cannons[citation needed] and domestic wrought iron cannons, as well as sappers employed to dig under the walls of the fortress. The fortress was impregnable; the Tokugawa suffered many losses.[citation needed]

On June 3, 1615 (6th day of 5th month of 20 year of Keicho era), at the Battle of Domyoji, Sanada Yukimura was in command of the Osaka Army on the right wing and engaged in a battle with Date Masamune forces in the area of Emperor Ōjin's Tomb and Konda Hachiman Shrine. This fight took place at around 12:00 and by 5:00 PM Sanada Yukimura made the decision to retreat towards Osaka Castle.

On June 4, 1615 (7th day of 5th month of 20 year of Keicho era), at the Battle of Tennōji Sanada Yukimura took position on the Chausuyama hill south of Osaka Castle. He and his soldiers engaged in a battle with forces of Matsudaira Tadanao of the Echizen Province.

According to The Life of Shogun Tokugawa Ieyasu by A.L. Sadler, in his intense fight against the wavering Echizen troops, Yukimura was badly wounded and exhausted. Soldiers from the Echizen army quickly went to Sanada. Too tired to fight back, Yukimura allowed the men to kill him, reportedly saying, "I am Sanada Nobushige, no doubt an adversary quite worthy of you, but I am exhausted and can fight no longer. Go on, take my head as your trophy". A man by the name of Nishio Nizaemon chopped off Sanada’s head.

The place of Sanada Yukimura's death is marked by a statue on the precincts of the Yasui Shrine located to the west of Shitennoji Temple in Osaka.

According to primary historical sources and personal letters, he was never referred to as Yukimura. That name surfaced in a military novel written during the Edo period and has since been popularized in modern plays, books, novels, and different media of entertainment. The historical documents use his historical name "Nobushige". One theory is that the name Yukimura is a portmanteau of Masayuki (his father) and Date Tsunamura.

A legend says that Yukimura had ten heroes who took an active role at the battles of Osaka Castle. They were called the Sanada Ten Braves, a group of ninja, and consisted of the following members:

A myth says he indeed managed to kill Ieyasu, but the Ogoshō was replaced by a kagemusha (a decoy or doppelganger) called Ogasawara Hidemasa. This myth is a testimony to the respect modern Japanese have for Yukimura's skills as a military commander.

Another legend states that in the Winter of 1614, Tokugawa Ieyasu sent an envoy to Yukimura with a notice that if he were to abandon the Toyotomi cause that he would receive his entire prefecture of Shinano. Yukimura laughed and posted the notice on the wall for all in the castle to see.

He is a playable character in Pokémon Conquest ("Pokémon + Nobunaga's Ambition" in Japan), with his partner Pokémon being Charmeleon and Charizard. He is also in all of the games of Koei's Samurai Warriors and Warriors Orochi game series[3]

In the popular manga, Prince of Tennis, his name was used for two characters, Genchiro Sanada and Seichii Yukimura. Both characters are defeated by Echizen Ryouma.

Yukimura Sanada is a main character of Hyakka Ryouran.

In Girls und Panzer, one member of the Oarai History Club, and the gunner for their tank team, whose real name is Kiyomi Sugiyama, adopts "Saemonza" as her nickname and often makes references to the period's history. She even habitually wears his banner as her headband, although in the series, instead of six black coins as in Sanada's original banner, it sports six golden ones.

In Tecmo Koei's PlayStation Vita game, Toukiden: The Age of Demons, Sanada Yukimura can be obtained as a mitama.