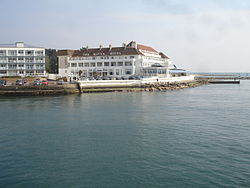 Sandbanks Peninsula, seen from the Sandbanks Ferry looking towards the Haven Hotel

Sandbanks is a small peninsula or spit (1 km2 or 0.39 sq mi) crossing the mouth of Poole Harbour on the English Channel coast at Poole in Dorset, England. It is well known for the highly regarded Sandbanks Beach and property value; Sandbanks has, by area, the fourth highest land value in the world.[1] The Sandbanks and Canford Cliffs Coastline area has been dubbed as "Britain's Palm Beach" by the national media.[2] 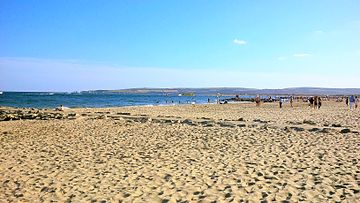 Sandbanks is connected to Studland by a chain ferry, the Sandbanks Ferry, which runs across the mouth of the harbour. The Sandbanks area of Poole Harbour (known as North Haven Lake) is widely used for water sports and by light marina craft. The north side is home to the Southern Headquarters of the Royal Yachting Association and an international sailing school.[3]

Views to the north extend across Poole Harbour and to Poole. To the south views extend across the English Channel and to the world heritage coastline of Studland and Swanage in the west.

There are exclusive homes both on Sandbanks and across the immediate region, stretching east from the Harbour to The Avenue (the eastern boundary of Poole). The adjacent areas of Lilliput, Branksome Park and Canford Cliffs, also have the largest concentration of expensive properties outside London. In 2005 a modest bungalow on the peninsula sold for three million pounds, despite its state of disrepair.[2] The same bungalow, in the same condition, went on sale in 2007 for four million pounds, attracting further attention.[4]

Sandbanks is home to three hotels, one of which is the historically important Haven Hotel, constructed in 1887 on the site of a previous hotel named the North Haven Inn which was built in 1838. The hotel was both the home and centre of wireless experiments by Guglielmo Marconi in the late 1890s, and was the third place in the world to boast a permanent wireless station (1899).

The Royal National Lifeboat Institution stationed a lifeboat at Sandbanks in 1865. The crew had to travel from Poole in a horse-drawn carriage whenever it was launched so a new Poole Lifeboat Station was opened at Fisherman's Dock on Poole Quay in 1882.[7]