Sandringham House is a Grade II* listed country house on 20,000 acres (8,100 ha) of land near the village of Sandringham in Norfolk, England.[1][2] The house is privately owned by Queen Elizabeth II and is located on the royal Sandringham Estate, which lies within the Norfolk Coast Area of Outstanding Natural Beauty.

The site has been occupied since the Elizabethan era, and, in 1771, architect Cornish Henley cleared the site to build Sandringham Hall.[3] The hall was modified during the 19th century by Charles Spencer Cowper, a stepson of Lord Palmerston,[4] who added an elaborate porch and conservatory, designed by architect Samuel Sanders Teulon.

In 1862, the hall was purchased by Queen Victoria at the request of the Prince of Wales (the future Edward VII) as a home for himself and his new bride, Princess Alexandra,[5] who found the surrounding Norfolk countryside reminiscent of her native Denmark.[6] However, in 1865, two years after moving in, the prince found the hall's size insufficient for his needs, and he commissioned A. J. Humbert to raze the hall and create a larger building.

The resulting red-brick house was completed in late 1870 in a mix of styles. This section incorporated the galleried entrance hall which is used by the royal family for entertaining and family occasions. A new wing was later added to one end of the house in a more traditional style, incorporating a ball room. The building was ahead of its time in amenities, with gas lighting, flushing water closets, and an early form of shower. One part of the house was destroyed in a fire during preparations for the Prince of Wales' 50th birthday in 1891, and later rebuilt.

Sandringham House has been the private home of four generations of the British Royal Family. The main features of the new building were bay windows, which helped lighten the interior. Despite the size of Sandringham and the spaciousness of the main rooms, the living quarters were relatively small.

Edward and Alexandra's sons, Prince Albert Victor and Prince George, for example, had very small bedrooms. The spacious grounds, however, provided room for Queen Alexandra's menagerie of horses, dogs, cats, and other animals. The kennels were a particular delight to the children.[7] In addition to stables for Royal horses in 1886 a racing pigeon loft was constructed for birds given to the Duke of York by King Leopold II of Belgium and one or more lofts for Royal pigeons have been maintained ever since. Since the death of Edward VII, Sandringham has been a popular holiday retreat for successive members of the Royal Family.

Since King George VI died in 1952 at Sandringham, Queen Elizabeth II's custom has been to spend the anniversary of her father's death and her own Accession privately with her family at the House, and use it as her official base until February. It is an excellent location for shooting and is used for royal shooting parties. Such was King George V's fondness for hunting on the estate, he ordered all the clocks to be set half an hour ahead of GMT to increase the amount of evening daylight available for hunting. This tradition of Sandringham Time was kept on the estate from 1901 until 1936 when the new King Edward VIII showed he was "a new broom" by sweeping the custom away.[8]

Along with Balmoral Castle, Sandringham House is the private property of the British royal family and not part of the Crown Estate. Their succession became an issue in 1936, when Edward VIII abdicated as king. Being legacies Edward had inherited from his father, George V, the estates did not automatically pass to his younger brother, George VI; the new king had to purchase the house from him.

Queen Alexandra occupied the main house of Sandringham after the death of Edward VII in 1910, and she died there in 1925. Her two sons, Albert Victor and King George V also died at Sandringham, in 1892 and 1936 respectively, as did her grandson, King George VI. Prince Alexander of Denmark, later King Olav V of Norway, a grandson of King Edward VII, was born on the Sandringham Estate in 1903.

Victoria, Princess Royal, the eldest daughter of Queen Victoria, sister of King Edward VII, and mother of Kaiser Wilhelm II, had a country house built at Friedrichshof, near Kronberg, in the style of Sandringham.

Diana, Princess of Wales, was born (in 1961) and raised at Park House,[4] near the Sandringham Estate. Diana's maternal grandparents, The Fermoys, Maurice Roche, 4th Baron Fermoy and Ruth Roche, Baroness Fermoy and then her parents John Spencer, 8th Earl Spencer and The Honourable Frances Shand Kydd rented Park House from the Royal Family for decades. After Diana's father succeeded to his father's title, Earl Spencer, Diana's family moved to their ancestral seat, Althorp, in Northamptonshire. She would spend Christmas with the Royal Family at Sandringham while she was still married to the Prince of Wales.

Other buildings on the grounds 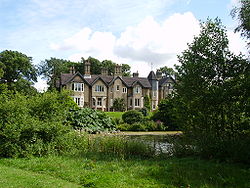 The estate is also home to York Cottage, built by Edward VII soon after he moved in. York Cottage was also a favourite of George V.

Anmer Hall is a Georgian house on the grounds. At one point it was the country home of the Duke of Kent.[9] In January 2013 British newspapers reported that the Queen had allocated Anmer Hall for use by the Duke and Duchess of Cambridge.

When Prince Carl of Denmark (later King Haakon VII of Norway) and Princess Maud were married in July 1896, Appleton House was a wedding gift to them from the bride’s parents, the Prince and Princess of Wales. The gift was intended to provide the newly married couple with a place to stay whenever they visited England. The Prince of Wales wrote to his Danish brother-in-law, Crown Prince Frederik of Denmark, Carl's father, “I have given Maud and Charles a small house, their own country retreat – about one mile from here – they will always have a pied-à-terre when they come over to England. I know they will appreciate this very much.”

A few months before the wedding the couple went to Sandringham to view their wedding gift. “I saw my new house. It is quite lovely,” Prince Carl wrote in a letter.

Queen Maud came to love the house. In 1899 she wrote in a letter,[citation needed] "Our little house is a perfect paradise, it all seems like a dream, that we are here at last, that it is so beautiful and light, every single room is so clean and fresh." Their son, the future King Olav V of Norway, was born on 2 July 1903 at the Appleton House.[10]

Appleton House was on 2½ floors and was built of brick. It had four sitting rooms on the ground floor and the same on the first floor, together with rooms for servants, 20 rooms in total. The house had a conservatory and was centrally heated. The property stood alone, surrounded by forested parkland in Flitcham, Norfolk, adjacent to Sandringham.

Around the house the Prince of Wales had laid out a garden, designed in accordance with the tastes of the day. Here there were round, oval, triangular and square beds of roses and rhododendrons. There were extensive lawns and tall hedges of yew and box, with paths between them. Queen Maud enjoyed taking walks along these paths. “Her albums contain many photographs that show her wandering alone along these paths – clad in a full-length, white dress, her parasol lifted high.”[citation needed]

In 1938, two days after Queen Maud’s interment, her husband, King Haakon wrote to King George VI and informed him that the time had come to return Appleton House to the British Royal Family. The Queen had had the property as long as she had wanted, just as the Prince of Wales had said she could when she was given it in 1896.

For many years the house stood unused. Its last known inhabitants were King George VI and Queen Elizabeth,[10] who lived in the house during a visit to Norfolk during World War II. A 1968 newspaper article[citation needed] with the headline “The Queen’s empty house” reported that a large anti-air raid structure had been constructed around the property during World War II and that this was unattractive and expensive to remove.

Since it would have been costly to restore the property to a habitable state, Appleton House was demolished in 1984.[10]

The house was first opened to the public in 1977, and there is a museum with displays of royal life and estate history that is also open to public.[11] About 600 acres (240 ha) are a country park or garden, open to the public.[11]

In January 2012, a body was found on the grounds of Sandringham; it was later identified as that of Alisa Dmitrijeva, a 17-year-old Latvian who lived in Wisbech, who was last seen alive on 31 August 2011 in King's Lynn.[12][13]