From Infogalactic: the planetary knowledge core
Jump to: navigation, search
This article is about the Italian Renaissance painter. For other uses, see Botticelli (disambiguation).

Alessandro di Mariano di Vanni Filipepi, known as Sandro Botticelli (Italian: [ˈsandro bottiˈtʃɛlli]; c. 1445[1] – May 17, 1510), was an Italian painter of the Early Renaissance. He belonged to the Florentine School under the patronage of Lorenzo de' Medici, a movement that Giorgio Vasari would characterize less than a hundred years later in his Vita of Botticelli as a "golden age". Botticelli's posthumous reputation suffered until the late 19th century; since then, his work has been seen to represent the linear grace of Early Renaissance painting.

Among Botticelli's best-known works are The Birth of Venus and Primavera.

Botticelli was born in the city of Florence in a house in the Via Nuova, Borg'Ognissanti, to Mariano di Vanni d'Amedeo Filipepi. Vasari reported that Botticelli was initially trained as a goldsmith by his brother Antonio.[2] There are very few details of Botticelli's life, but it is known that he became an apprentice when he was about fourteen years old, which would indicate that he received a fuller education than other Renaissance artists. Probably by 1462 he was apprenticed to Fra Filippo Lippi;[3] many of his early works have been attributed to the elder master, and attributions continue to be uncertain. Influenced also by the monumentality of Masaccio's painting, it was from Lippi that Botticelli learned a more intimate and detailed manner. As recently discovered, during this time, Botticelli could have traveled to Hungary, participating in the creation of a fresco in Esztergom, ordered in the workshop of Filippo Lippi by János Vitéz, then archbishop of Hungary.[citation needed]

By 1470, Botticelli had his own workshop. Even at this early date, his work was characterized by a conception of the figure as if seen in low relief, drawn with clear contours, and minimizing strong contrasts of light and shadow which would indicate fully modeled forms. 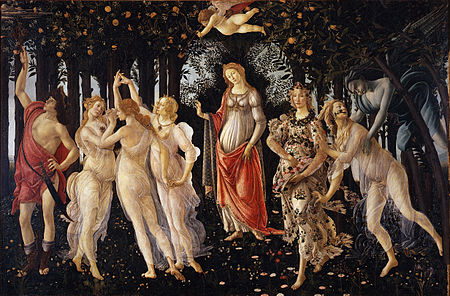 Primavera (c. 1482), icon of the springtime renewal of the Florentine Renaissance, also at the summer palazzo of Pierfrancesco de' Medici, as a companion piece to the Birth of Venus and Pallas and the Centaur. Left to right: Mercury, the Three Graces, Venus, Flora, Chloris, Zephyrus

The Adoration of the Magi for Santa Maria Novella (c. 1475–76, now at the Uffizi), contains the portraits of Cosimo de Medici, his sons Piero and Giovanni, and his grandsons Lorenzo and Giuliano. The quality of the scene was hailed by Vasari as one of Botticelli's pinnacles. In 1481, Pope Sixtus IV summoned Botticelli and other prominent Florentine and Umbrian artists to fresco the walls of the Sistine Chapel. The iconological program was the supremacy of the Papacy. Sandro's contribution included the Temptations of Christ, the Punishment of the Rebels and Trial of Moses. He returned to Florence, and "being of a sophistical turn of mind, he there wrote a commentary on a portion of Dante and illustrated the Inferno which he printed, spending much time over it, and this abstention from work led to serious disorders in his living." Thus Vasari characterized the first printed Dante (1481) with Botticelli's decorations; he could not imagine that the new art of printing might occupy an artist. 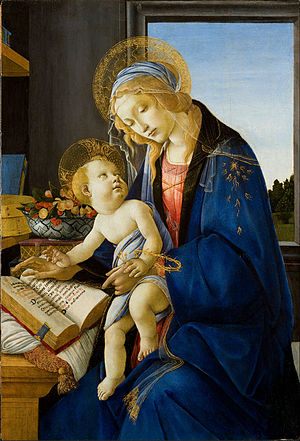 The masterpieces Primavera (c. 1482) and The Birth of Venus (c. 1485) were both seen by Vasari at the villa of Lorenzo di Pierfrancesco de' Medici at Castello in the mid-16th century, and until recently, it was assumed that both works were painted specifically for the villa. Recent scholarship suggests otherwise: the Primavera was painted for Lorenzo's townhouse in Florence, and The Birth of Venus was commissioned by someone else for a different site. By 1499, both had been installed at Castello.[4]

In these works, the influence of Gothic realism is tempered by Botticelli's study of the antique. But if the painterly means may be understood, the subjects themselves remain fascinating for their ambiguity. The complex meanings of these paintings continue to receive widespread scholarly attention, mainly focusing on the poetry and philosophy of humanists who were the artist's contemporaries. The works do not illustrate particular texts; rather, each relies upon several texts for its significance. Of their beauty, characterized by Vasari as exemplifying "grace" and by John Ruskin as possessing linear rhythm, there can be no doubt. The pictures features Botticelli's linear style emphasized by the soft continual contours and pastel colors.[5]

In the mid-1480s, Botticelli worked on a major fresco cycle with Perugino, Domenico Ghirlandaio and Filippino Lippi, for Lorenzo the Magnificent's villa near Volterra; in addition he painted many frescoes in Florentine churches. In 1491 he served on a committee to decide upon a façade for the Cathedral of Florence. 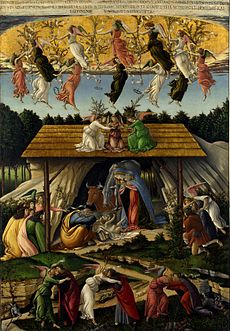 In later life, Botticelli was one of the followers of the deeply moralistic friar Girolamo Savonarola who preached in Florence from 1490 until his execution in 1498, though the full extent of Savonarola's influence remains uncertain.[6]

"Like much of Florence, Botticelli had come under the sway of Savonarola and his art had transformed from the decorative to the deeply devout – The Mystical Nativity (c. 1500–01) [for example] bears all the signs of this change"[7]

"The story that he burnt his own paintings on pagan themes in the notorious "Bonfire of the Vanities" is not told by Vasari, who nevertheless asserts that of the sect of Savonarola "he was so ardent a partisan that he was thereby induced to desert his painting, and, having no income to live on, fell into very great distress. For this reason, persisting in his attachment to that party, and becoming a Piagnone[8] he abandoned his work."

Botticelli biographer Ernst Steinmann searched for the artist's psychological development through his Madonnas. In the "deepening of insight and expression in the rendering of Mary's physiognomy", Steinmann discerned proof of Savonarola's influence over Botticelli. (In Steinmann's work the dates of a number of Madonnas were placed at a later point in the artist's life). Steinmann disagreed with Vasari's assertion that Botticelli produced nothing after coming under the influence of Savonarola, believing rather that the spiritual and emotional Virgins painted by Sandro followed directly from the teachings of the Dominican monk. 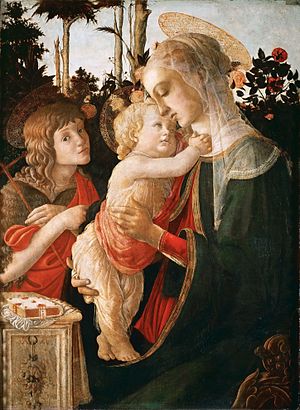 Botticelli was already little employed in 1502. In 1504 he was a member of the committee appointed to decide where Michelangelo's David would be placed. His later work, especially as seen in a series on the life of St. Zenobius, witnessed a diminution of scale, expressively distorted figures, and a non-naturalistic use of colour reminiscent of the work of Fra Angelico nearly a century earlier. After his death, his reputation was eclipsed longer and more thoroughly than that of any other major European artist. His paintings remained in the churches and villas[9] for which they had been created, his frescoes in the Sistine Chapel upstaged by Michelangelo's.

The English collector William Young Ottley had however brought Botticelli's The Mystical Nativity to London with him in 1799 after buying it in Italy. After Ottley's death, its next purchaser, William Fuller Maitland of Stansted, allowed it to be exhibited in a major art exhibition held in Manchester in 1857, the Art Treasures Exhibition,[10] where among many other art works it was viewed by more than a million people.

The first nineteenth-century art historian to have looked with satisfaction at Botticelli's Sistine frescoes was Alexis-François Rio; Anna Brownell Jameson and Charles Eastlake were alerted to Botticelli, works by his hand began to appear in German collections, and the Pre-Raphaelite Brotherhood incorporated elements of his work into their own.[11] Walter Pater created a literary picture of Botticelli, who was then taken up by the Aesthetic movement. The first monograph on the artist was published in 1893; then, between 1900 and 1920 more books were written on Botticelli than on any other painter.[12] 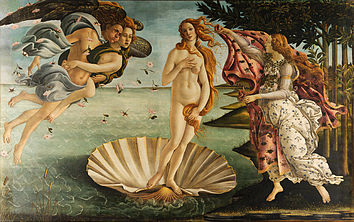 Botticelli never wed, and expressed a strong disliking to the idea of marriage, a prospect he claimed gave him nightmares.[13]

The popular view is that he suffered from an unrequited love for Simonetta Vespucci, a married noblewoman. According to popular belief, she had served as the model for The Birth of Venus and recurs throughout his paintings, despite the fact that she had died years earlier, in 1476. Botticelli asked that when he died, he be buried at her feet in the Church of Ognissanti in Florence. His wish was carried out when he died some 34 years later, in 1510.

Some modern historians have also examined other aspects of his sexuality. In 1938, Jacques Mesnil discovered a summary of a charge in the Florentine Archives for November 16, 1502, which read simply "Botticelli keeps a boy", under an accusation of sodomy. The painter would then have been fifty-eight; the charges were eventually dropped. Mesnil dismissed it as a customary slander by which partisans and adversaries of Savonarola abused each other. Opinion remains divided on whether this is evidence of homosexuality.[14] Many have firmly backed Mesnil,[15] but others have cautioned against hasty dismissal of the charge.[16] Yet while speculating on the subject of his paintings, Mesnil nevertheless concluded "woman was not the only object of his love".[17]

In his book Sandro Botticelli: Life and Work, Ronald Lightbown claims "There are only two books to attempt a catalogue raisonné of the works of Botticelli and his school" (source: page 328 of the 1989 edition). These are the two books: