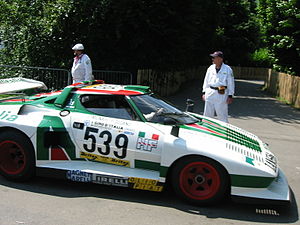 Munari with a Group 5 Lancia Stratos Turbo in 2005.

He was to become synonymous with another of Lancia's rally icons, the Lancia Stratos HF, and the partnership of Italian car and Italian driver scooped a further Monte Carlo Rally hat-trick in the mid-1970s, among a total of seven World Rally Championship victories. Munari also won the 1977 FIA Cup for Rally Drivers title. Later in his career he competed with a Fiat 131 Abarth, finishing third at the 1978 Tour de Corse and sixth at the 1980 Rallye Côte d'Ivoire. His last WRC appearances were at the Safari Rally, which he contested from 1981 to 1984, but retired each time.