From Infogalactic: the planetary knowledge core
Jump to: navigation, search
For other uses, see Sanhedrin (disambiguation). 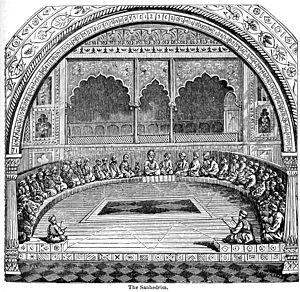 The Sanhedrin, from an 1883 encyclopedia

The Sanhedrin (Hebrew: סַנְהֶדְרִין sanhedrîn, Greek: Συνέδριον,[1] synedrion, "sitting together," hence "assembly" or "council") was an assembly of twenty-three to seventy-one men appointed in every city in the Land of Israel. In the Hebrew Bible,[2] Moses and the Israelites were commanded by God to establish courts of judges who were given full authority over the people of Israel, who were commanded by God to obey every word the judges instructed and every law they established. Judges in ancient Israel were the religious leaders and Teachers of the nation of Israel. The Mishnah[3] arrives at the number twenty-three based on an exegetical derivation: It must be possible for a "community" to vote for both conviction and exoneration[4] The minimum size of a "community" is 10 men[5] (10 vs 10). One more is required to achieve a majority (11 vs 10), but a simple majority cannot convict,[6] and so an additional judge is required (12 vs 10). Finally, a court should not have an even number of judges to prevent deadlocks; thus 23 (12 vs 10 and 1). This court dealt with only religious matters.

The Great Sanhedrin was made up of a Nasi, who functioned as head or representing president, but was not a member of the court, an Av Beit Din, the chief of the court, and sixty-nine general members (Mufla).[7] In the Second Temple period, the Great Sanhedrin met in the Hall of Hewn Stones in the Temple in Jerusalem. The court convened every day except festivals and Shabbat. In the late 3rd century, to avoid persecution, its authoritative decisions were issued under the name of Beit HaMidrash.

Historically, the last binding decision of the Great Sanhedrin appeared in 358 CE, when the Hebrew Calendar was adopted. The Sanhedrin was dissolved after continued persecution by the Roman Empire and aspiring Christendom. Over the centuries, there have been attempts to revive the institution, such as the Grand Sanhedrin convened by Napoleon Bonaparte and modern attempts in Israel.

The Sanhedrin is mentioned in the Gospels in relation to the Sanhedrin trial of Jesus and several times in the Acts of the Apostles, including a Great Sanhedrin in chapter 5 where Gamaliel appeared, and in the stoning death of Stephen the deacon in chapter 7.

The Hasmonean court in the Land of Israel, presided over by Alexander Jannaeus, king of Judea until 76 BCE, followed by his wife, was called Synhedrion or Sanhedrin.[8] The exact nature of this early Sanhedrin is not clear. It may have been a body of sages or priests, or a political, legislative and judicial institution. Only after the destruction of the Second Temple was the Sanhedrin made up only of sages.[8]

The Talmud (tractate Sanhedrin) identifies two classes of rabbinical courts called Sanhedrin, a Great Sanhedrin (בית דין הגדול) and a Lesser Sanhedrin (בית דין הקטן). Each city could have its own lesser Sanhedrin of 23 judges, but there could be only one Great Sanhedrin of 71, which among other roles acted as the Supreme Court, taking appeals from cases decided by lesser courts. The numbers of judges were predicated on eliminating the possibility of a tie and the last to cast their vote was the head of the court.

The Sanhedrin as a body claimed powers that lesser Jewish courts did not have. As such, they were the only ones who could try the king, extend the boundaries of the Temple and Jerusalem, and were the ones to whom all questions of law were finally put. Before 191 BC the High Priest acted as the ex officio head of the Sanhedrin,[citation needed] but in 191 BCE, when the Sanhedrin lost confidence in the High Priest, the office of Nasi was created. After the time of Hillel the Elder (late 1st century BCE and early 1st century CE), the Nasi was almost invariably a descendant of Hillel. The second highest-ranking member of the Sanhedrin was called the Av Beit Din, or "Head of the Court" (literally, Av Beit Din = "father of the house of judgment"), who presided over the Sanhedrin when it sat as a criminal court.[9]

The Sanhedrin met in a building known as the Hall of Hewn Stones (Lishkat ha-Gazit), which has been placed by the Talmud and many scholars as built into the north wall of the Temple Mount, half inside the sanctuary and half outside, with doors providing access both to the Temple and to the outside. The name presumably arises to distinguish it from the buildings in the Temple complex used for ritual purposes, which had to be constructed of stones unhewn by any iron implements.

In some cases, it was only necessary for a 23-member panel (functioning as a Lesser Sanhedrin) to convene. In general, the full panel of 71 judges was only convened on matters of national significance (e.g., a declaration of war) or in the event that the 23-member panel could not reach a conclusive verdict.[10] 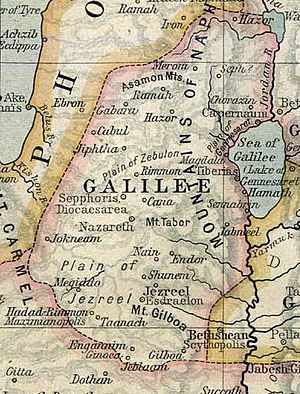 By the end of the Second Temple period, the Sanhedrin reached its pinnacle of importance, legislating all aspects of Jewish religious and political life within the parameters laid down by Biblical and Rabbinic tradition.

During the presidency of Gamaliel IV (270–290), due to Roman persecution, it dropped the name Sanhedrin; and its authoritative decisions were subsequently issued under the name of Beth HaMidrash.[citation needed]

In 363, emperor Julian ordered the Temple rebuilt.[11] A personal friend of his, Ammianus Marcellinus, wrote this about the effort:

Julian thought to rebuild at an extravagant expense the proud Temple once at Jerusalem, and committed this task to Alypius of Antioch. Alypius set vigorously to work, and was seconded by the governor of the province, when fearful balls of fire, breaking out near the foundations, continued their attacks, till the workmen, after repeated scorchings, could approach no more: and he gave up the attempt.

The failure to rebuild the Temple has been ascribed to the Galilee earthquake of 363, and to the Jews' ambivalence about the project. Sabotage is a possibility, as is an accidental fire. Divine intervention was the common view among Christian historians of the time.[12] Julian's support of Jews, coming after the hostility of many earlier Emperors, meant that Jews called him Julian the Hellene.[13]

As a reaction to Julian's pro-Jewish stance, Theodosius I forbade the Sanhedrin to assemble and declared ordination illegal. Capital punishment was prescribed for any Rabbi who received ordination and complete destruction of the town where the ordination occurred.[14]

However, since the Hebrew calendar was based on witnesses' testimony, that had become far too dangerous to collect, Hillel II recommended change to a mathematically based calendar that was adopted at a clandestine, and maybe final, meeting in 358 CE. This marked the last universal decision made by that body.

Gamaliel VI (400–425) was the Sanhedrin's last president. With his death in 425, Theodosius II outlawed the title of Nasi, the last remains of the ancient Sanhedrin. An imperial decree of 426 diverted the patriarchs' tax (post excessum patriarchorum) into the imperial treasury.[14]

In 2004, excavations in Tiberias conducted by the Israel Antiquities Authority uncovered a structure dating to the 3rd century AD that may have been the seat of the Sanhedrin when it convened in that city. At the time it was called Beit Hava'ad.[15]

The Sanhedrin is traditionally viewed as the last institution that commanded universal Jewish authority among the Jewish people in the long chain of tradition from Moses until the present day. Since its dissolution in 358 AD by imperial decree, there have been several attempts to re-establish this body either as a self-governing body, or as a puppet of a sovereign government.

There are records of what may have been of attempts to reform the Sanhedrin in Arabia,[16] in Jerusalem under the Caliph 'Umar,[16] and in Babylon (Iraq),[17] but none of these attempts were given any attention by Rabbinic authorities and little information is available about them. 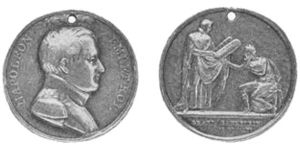 Medallion struck in honor of the "Grand Sanhedrin" convened by Emperor Napoleon I of France.

The "Grand Sanhedrin" was a Jewish high court convened by Napoleon I to give legal sanction to the principles expressed by the Assembly of Notables in answer to the twelve questions submitted to it by the government (see Jew. Encyc. v. 468, s.v. France).

On October 6, 1806, the Assembly of Notables issued a proclamation to all the Jewish communities of Europe, inviting them to send delegates to the Sanhedrin, to convene on October 20. This proclamation, written in Hebrew, French, German, and Italian, speaks in extravagant terms of the importance of this revived institution and of the greatness of its imperial protector. While the action of Napoleon aroused in many Jews of Germany the hope that, influenced by it, their governments also would grant them the rights of citizenship, others looked upon it as a political contrivance. When in the war against Prussia (1806–07) the emperor invaded Poland and the Jews rendered great services to his army, he remarked, laughing, "The sanhedrin is at least useful to me."[citation needed] David Friedländer and his friends in Berlin described it as a spectacle that Napoleon offered to the Parisians.

Since the dissolution of the Sanhedrin in 358 AD,[18] there has been no universally recognized authority within Jewish law. Maimonides (1135–1204) was one of the greatest scholars of the Middle Ages, and is arguably one of the most widely accepted scholars among the Jewish people since the closing of the Talmud in 500. Influenced by the rationalist school of thought and generally showing a preference for a natural (as opposed to miraculous) redemption for the Jewish people, Maimonides proposed a rationalist solution for achieving the goal of re-establishing the highest court in Jewish tradition and reinvesting it with the same authority it had in former years. There have been several attempts to implement Maimonides' recommendations, the latest being in modern times.

There have been rabbinical attempts to renew Semicha and re-establish a Sanhedrin by Rabbi Jacob Berab in 1538, Rabbi Yisroel Shklover in 1830, Rabbi Aharon Mendel haCohen in 1901, Rabbi Zvi Kovsker in 1940 and Rabbi Yehuda Leib Maimon in 1949.

In October 2004 (Tishrei 5765), a group of rabbis representing varied Orthodox communities in Israel undertook a ceremony in Tiberias,[19] where the original Sanhedrin was disbanded, in which it claimed to re-establish the body according to the proposal of Maimonides and the Jewish legal rulings of Rabbi Yosef Karo. The controversial attempt has been subject to debate within different Jewish communities.