From Infogalactic: the planetary knowledge core
Jump to: navigation, search
This is a Mongolian name. The given name is Zorig, and the name Sanjaasürengiin is a patronymic, not a family name. The subject should be referred to by the given name.

Zorig Sanjaasuren (Mongolian: Санжаасүрэнгийн Зориг, 20 April 1962 – 2 October 1998) was a prominent Mongolian politician and leader of the country's 1990 democratic revolution. He is called the "Golden Swallow of Democracy" (Mongolian: Ардчиллын алтан хараацай, Ardchillyn altan kharaatsai).[1] His murder remains unsolved. After his death, his sister Oyuun entered politics and founded the Civic Will Party.

Zorig's grandfather was a Russian geographer who had come to Mongolia as part of an expedition headed by Pyotr Kozlov. Zorig's grandfather was a victim of Marshal Choibalsan's purges, leaving his daughter Dorjpalam, Zorig's mother, an orphan.[2] Dorjpalam starred in a popular Mongolian movie before marrying Sanjaasüren, Mongolian State University professor and a Buryat[3] (a Mongolian ethnic minority). Zorig was the second of their three children.[4]

From 1970 on, Zorig attended middle school No. 23 in Ulaanbaatar, one of the city's Russian-language schools. From 1980 to 1985 he studied philosophy at Moscow's Lomonosov Moscow State University.[3][5] Afterwards, he worked for a year as an instructor for the Mongolian Revolutionary Youth League in Ulaanbaatar,[5] and in 1986 became lecturer for scientific communism at the Mongolian State University.[6] He became an accomplished chess player, later serving as president of the Mongolian Chess Federation.[5] In 1988 he founded the "New Generation" group of young dissidents dedicated to spreading democracy in Mongolia.[3] 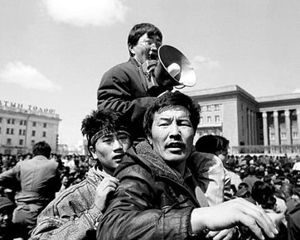 In 1989 and 1990, S. Zorig played a leading role in the events that led to Mongolia's adoption of a multi-party system. On December 10, 1989, a month after the fall of the Berlin Wall, Zorig led a group of 200 activists in a public protest demanding a free-market economy and free elections. In January 1990 Zorig and his fellow Mongolian Democrat dissidents began staging weekend protests in Sükhbaatar Square, the center of Ulaanbaatar. The protests started small but grew into large crowds as January passed into February.[7] Tensions increased as the crowds swelled and the Communist government debated crushing them with force. At one point when protesters were scuffling with soldiers and an outbreak of violence seemed likely, Zorig took a megaphone, sat atop a friend's shoulders to make himself visible to the crowd, and called for calm. Violence was averted. The picture of Zorig addressing the protesters became a famous symbol of Mongolia's peaceful revolution.[8] In March, the Mongolian Politburo resigned and one-party rule in Mongolia ended.[9]

In June 1990, Zorig was elected into the People's Great Khural. In August 1991, he was the only prominent Mongolian politician to immediately denounce the coup attempt by Soviet hardliners against Mikhail Gorbachev.[5] He was elected into the State Great Khural both in 1992[10] and 1996, the first time as a minority member and the second time as a member of the Democratic Union that swept into power as Mongolia's first non-Communist government since the 1921 Communist revolution.[11] Zorig questioned the pace of free-market reforms in Mongolia after the Democrats came to power, believing the reforms weren't fair and would push too many Mongolians below the poverty line.[12] In 1998 he became Mongolia's Minister for Infrastructure.[5]

The year 1998 was a year of political crisis in Mongolia. Tsakhiagiin Elbegdorj became the new Prime Minister of Mongolia in April 1998, and in one of his first decisions he sold the state-owned Reconstruction Bank to the private Golomt Bank, which was owned by Mongolian Democrats. Members of the Mongolian People's Revolutionary Party walked out in protest, and, without a working majority in Parliament, Elbegdorj was forced to resign. The parties conferred and in closed meetings agreed on Infrastructure Minister S. Zorig as a compromise candidate to be the new Prime Minister.[5][13] The announcement was scheduled for Monday, October 5.[14]

Zorig was murdered on Friday, October 2, 1998. Two assailants entered his apartment, tied up his wife Bulgan, and waited. As soon as Zorig stepped through the door they jumped him, stabbing him sixteen times, including three stab wounds to the heart. Strangely, they stole a bottle of vinegar and a bottle of soy sauce from the refrigerator before fleeing the apartment.[15] Four days after the murder, mourners crowded Sukhbaatar Square, holding candlelight vigils.[16][17] His body lay in the Government House before his burial on Wednesday, October 7.[18] The government crisis lingered for another two months[19] until Janlavyn Narantsatsralt, the mayor of Ulaanbaatar, was finally named the new Prime Minister in December 1998.[20]

His murder remains unsolved, although the timing led to speculation that someone with insider knowledge of Zorig's impending elevation to the post of Prime Minister took action to prevent it.[13] Zorig's wife Bulgan came under suspicion and was briefly held by police, but no charges were ever brought. Oyun believes that her brother was murdered to prevent him from mounting an anti-corruption campaign as Prime Minister. 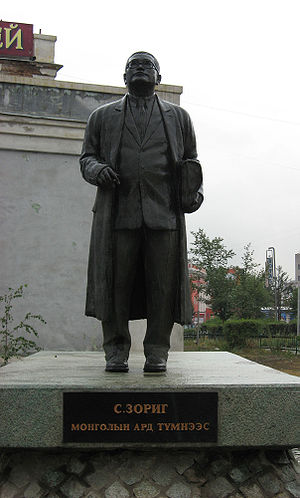 Zorig memorial in Ulaanbaatar. The plaque reads:
"S. Zorig/ From the People of Mongolia"

Zorig's sister Sanjaasürengiin Oyuun was elected to his seat in the Mongolian parliament soon after his assassination.[20] She later served as Mongolia's Minister of Foreign Affairs. The political party founded by his sister Oyuun, the Irgenii Zorig Nam (Mongolian: Иргэний Зориг нам) or Civic Will Party, bears a reference to his name.

A statue for him has been erected in Ulaanbaatar, across the street from the Central Post Office.[21] The statue faces toward the Government Palace, symbolizing Zorig's morning walk toward his workplace. Flowers are placed at the statue every year on the day of his death,[22] attended by his family members, friends, politicians, and other citizens.