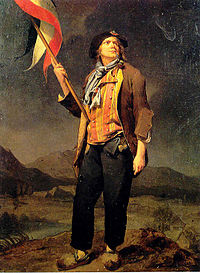 The sans-culottes (French: [sɑ̃kylɔt], literally "without breeches") were the common people of the lower classes in late 18th century France, a great many of whom became radical and militant partisans of the French Revolution in response to their poor quality of life under the Ancien Régime.[1] The name sans-culottes refers to their clothing, and through that to their lower-class status: culottes were the fashionable silk knee-breeches of the 18th-century nobility and bourgeoisie, and the working class sans-culottes wore pantaloons, or trousers, instead.[2] The sans-culottes, most of them urban labourers, served as the driving popular force behind the revolution. Though ill-clad and ill-equipped, they made up the bulk of the Revolutionary army during the early years of the French Revolutionary Wars.[3]:1-22

The most fundamental political ideals of the sans-culottes were social equality, economic equality, and popular democracy. They supported the abolition of all the authority and privileges of the monarchy, nobility, and Roman Catholic clergy, the establishment of fixed wages, the implementation of price controls to ensure affordable food and other essentials, and vigilance against counter-revolutionaries.[3][4] The height of their influence spanned roughly from the original overthrow of the monarchy in 1792 to the Thermidorian Reaction in 1794.[2] Throughout the revolution, the sans-culottes provided the principal support behind the more radical and anti-bourgeoisie factions of the Paris Commune, such as the Enragés and the Hébertists, and were led by populist revolutionaries such as Jacques Roux and Jacques Hébert.[1][5] The sans-culottes also populated the ranks of paramilitary forces charged with physically enforcing the policies and legislation of the revolutionary government, a task that not uncommonly included violence and the carrying out of executions against perceived enemies of the revolution.

During the peak of their influence, the sans-culottes were seen as the truest and most authentic sons of the French Revolution, held up as living representations of the revolutionary spirit. During the height of revolutionary fervor, such as during the Reign of Terror when it was dangerous to be associated with anything counter-revolutionary, even public functionaries and officials actually from middle or upper-class backgrounds adopted the clothing and label of the sans-culottes as a demonstration of solidarity with the working class and patriotism for the new French Republic.[2]

But by early 1794, as the bourgeois and middle class elements of the revolution began to gain more political influence, the fervent working class radicalism of the sans-culottes rapidly began falling out of favor within the National Convention.[2] It wasn't long before Maximilien de Robespierre and his now dominant Jacobin Club turned against the radical factions of the National Convention, including the sans-culottes, despite them having previously been the strongest supporters of the revolution and its government. Several important leaders of the Enragés and Hébertists were imprisoned and executed by the very revolutionary tribunals they had supported.[2] The execution of radical leader Jacques Hébert spelled the decline of the sans-culottes,[2] and with the successive rise of even more conservative governments, the Thermidorian Convention and the French Directory, they were definitively silenced as a political force.[3]:258-259 After the defeat of the 1795 popular revolt in Paris, the sans-culottes ceased to play any effective political role in France until the July Revolution of 1830. 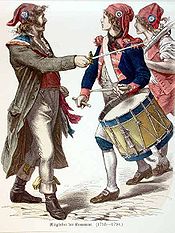 The popular image of the sans-culotte has gained currency as an enduring symbol for the passion, idealism and patriotism of the common man of the French Revolution.[6] The term sans-culottism, sans-culottisme in French, refers to this idealized image and the themes associated with it.[6] Many public figures and revolutionaries who were not strictly working class styled themselves citoyens sans-culottes in solidarity and recognition.[2] However, in the period immediately following the Thermidorian Reaction the sans-culottes and other far-left political factions were heavily persecuted and repressed by the likes of the Muscadins.[2]

The French Republican Calendar at first termed the complementary days at the end of the year Sansculottides; however, the National Convention suppressed the name when adopting the Constitution of the Year III (1795) and substituted the name jours complémentaires ("additional days").[2]

According to Sally Waller, part of the sans-culottes mantra was "permanent anticipation of betrayal and treachery".[7] The members of the sans-culottes were constantly on edge and fearing betrayal, which can be attributed to their violent and radical rebellion tactics.[8] Marxist historian Eric Hobsbawm observes that the sans-culottes were a 'shapeless, mostly urban movement of the labouring poor, small craftsmen, shopkeepers, artisans, tiny entrepreneurs and the like'.[9] He further notes they were organised notably in the local political clubs of Paris and "provided the main striking-force of the revolution".[9] Hobsbawm writes that these were the actual demonstrators, rioters and constructors of street barricades. However, Hobsbawm maintains, sans-culottism provided no real alternative to the bourgeois radicalism of the Jacobins;[9] from Hobsbawm's Marxist perspective, the ideal of the sans-culottes, which sought to express the interests of the 'little men' who existed between the poles of the bourgeois and the proletarian, was contradictory and ultimately unrealizable.[9]

The Marxist historian Albert Soboul emphasized the importance of the sans-culottes as a social class, a sort of proto-proletariat that played a central role in the French Revolution. That view has been sharply attacked by scholars who say the sans-culottes were not a class at all. Indeed, as one historian points out, Soboul's concept has not been used by scholars in any other period of French history.[10]

The women's fashion industry commonly takes words that have historically been used to describe men's garments and uses them to describe an entirely different garment, often creating confusion among historians, history students, and readers. For example, currently, the term "culottes" in French is now used to describe women's underpants, an article of clothing that has little or no relation to the historic culottes. The term "sans-culottes" has been used to refer colloquially to mean not wearing underpants.[11]