From Infogalactic: the planetary knowledge core
Jump to: navigation, search
This article is about the municipality in Sardinia. For the martyr, see Antiochus of Sulcis.

Sant'Antioco (Italian pronunciation: [santanˈtiːoko]; Sardinian: Santu Antiogu) is the name of both an island and a municipality (comune) in southwestern Sardinia, in the Province of Carbonia-Iglesias, in Sulcis zone. With a population of 11,730, the municipality of Sant'Antioco it is the island's largest community. It is also the site of ancient Sulci, considered the second city of Sardinia in antiquity.

Sant'Antioco is the second largest island of the Sardinian region, after Sardinia itself, with a surface of 109 square kilometres (42 sq mi); it is also the fourth largest in Italy after Sicily, Sardinia itself and Elba. It is located some 87 kilometres (54 mi) from Cagliari, to which is connected through the SS126 state road, using a modern bridge. The island is divided between the two municipalities of Sant'Antioco and Calasetta. Other settlements are the small tourist resort of Maladroxia (a frazione of Sant'Antioco municipality) and Cussorgia, part of Calasetta. 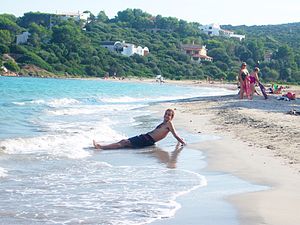 The island of Sant'Antioco was settled at least from the 5th millennium BC (the so-called culture of San Michele of Ozieri), which was based mainly on fishing and agriculture. Typical tombs (called domus de janas) and menhirs belonging to this culture have been found. The island also housed nuraghe civilizations: findings include the nuraghe of Su Niu de Su Crobu ("Crow's Nest").

The city of Sant'Antioco was founded in the 8th century BC by the Phoenicians, with the name of Solki, of which a tophet (children) necropolis has been excavated. Later (6th century BC) it became a Carthaginian colony, to which another necropolis belongs. The Punic domination ended in the 2nd century BC, when Solki was conquered by the Romans, who connected it to the mainland through an artificial isthmus. During the civil war between Julius Caesar and Pompey it sided with the latter, being severely punished after his defeat. During Roman times, it was called Plumbaria, after its lead deposits.[1]

The current city name derives from St. Antiochus, evangelizer of the area, who was martyred in 125 AD. After the decline and the end of the Western Roman Empire, Sant'Antioco was a fortified strong point of the Byzantines. It was repeatedly attacked by the Saracens starting from the early 8th century, and gradually abandoned by the inhabitants who fled to the more protected inner area; the island mainly remained important as the end of pilgrimages devoted to St. Antiochus. A new settlement (bidda in Sardinian) was established around 935 by the judge (the local title for lord) of Cagliari, but this also was abandoned after the end of the giudicato. The island was a territory of the Kingdom of Sardinia (created in 1354) and later was acquired by archbishopric of Cagliari (1503) and, in 1758, by the religious Order of SS. Maurizio and Lazzaro: at the time it had 38 houses, 15 workshops, 164 huts, with some 450 inhabitants.

In January–May 1793 the island was occupied by French troops under admiral Laurent Jean François Truguet, and the citizens freed from ecclesiastical taxes. The last attack by North African pirates occurred in 1815;[2] the same year in which the relics of the patron saint were brought back to the cathedral.

In the period from 15 May to 15 June a famous tuna "mattanza" is held, with fishing of Atlantic bluefin tuna (Thunnus thynnus). 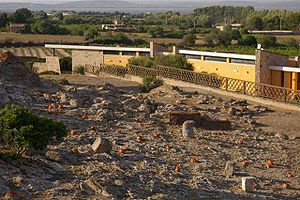