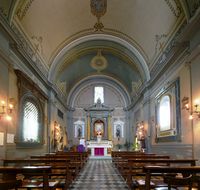 Santa Chiara is a Roman Catholic church in Pisa, region of Tuscany, Italy, a few paces away from the Piazza dei Miracoli.

Originally called Santo Spirito, it was reconstructed in 1227 as the chapel for the adjacent hospital of St. Clare, later called Spedale Nuovo di Santo Spirito. The portal fresco of Madonna and child with Saints Clare and Francis dates from the 17th century. One of the relics contained therein is a supposed spine from the crown of Christ held at the church of Santa Maria della Spina. It also contains a 15th-16th century wooden Crucifix and a marble Annunciation (1567) by Stoldo Lorenzi.