From Infogalactic: the planetary knowledge core
Jump to: navigation, search
This article is about the artform. For other uses, see Santo (disambiguation).
File:ReinaTodoslosSantos.jpg
Regalia accessories for Our Lady of All Saints. Note the solid brass Aureola or halo. Spain, 2008.

Santo (English: Saint) are various religious artforms found in colonized parts of Spain consisting of wooden or ivory statues that depict various saints, angels, or Marian titles or one of the personages of the Holy Trinity. A Santero refers to a wood-carver who makes the image, but has also come to be known as someone who collects Santo images either as a religious devotion, or artistic hobby, or both. Some Santo images which have gained greater public devotion among the faithful have also merited Papal approval through Canonical Coronations.

Icons and other religious images were crucial for the conversions of indigenous peoples to Roman Catholic Church, which was itself an integral part of the Spanish colonization of the Americas. However, long distances, inefficient methods of transportation, and high demand for such artworks limited the ability of ecclesiastical authorities to supply parish churches, especially those in remote outposts, with works of religious art from the Kingdom of Spain.

The practice of creating Santo objects began in Spain, where mannequin style religious images were commonly vested in ornate religious clothing, often expensive and funded by religious devotees. An early known example is the 1555 statue of Infant Jesus of Prague, already vested during the time of Saint Teresa of Avila. Customarily, jewels are various accessories were also added onto the image, a tradition still carried today.

Santo images are also common throughout Latin America and the Caribbean, while the tradition of santo carving was preserved as a folk art in Northern New Mexico, whose isolated villages remain secluded to this day. Of particular note is the village of Cordova which has produced several well-known Santeros (carvers of santos). A major one was George López, who was awarded the National Heritage Fellowship by the National Endowment for the Arts in 1982.

Santo statues are commonly known as revultos or informally as bultos. They are usually carved from cottonwood root, pine or aspen. A Santero carves a bulto with a knife and then covers it with gesso, a mixture of native gypsum and glue, to prepare it for painting. Some contemporary santeros still use paints from homemade pigments.[1] 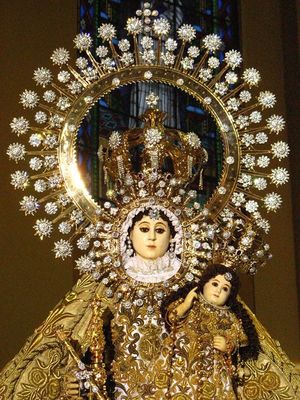 Often called the "Grandest Marian icon" in the Philippines, the image of Our Lady of La Naval de Manila is an ivory statue, with gold bullion embroidered vestments and jewelled crowns among its regalia. Santero collectors also own medium-replicas of this image.
File:Bulto, Harwood.jpg
A common Spanish colonial santo or bulto with more caricature-like than realistic features, Harwood Museum, Taos, New Mexico
File:Museummanaoagaajf.JPG
Regalia for the image Our Lady of Manaoag in the ecclesiastical museum associated with the image's shrine. Many Santero collectors also have similar collections of accessories and vestments like this.

The Santero culture in the Philippines is widely prevalent among Filipino Catholics, having been influenced by centuries of Spain colonial rule and various forms of folk Catholicism. The earliest recorded vested Santo in the country is the Santo Niño de Cebu, a baptismal gift given by Ferdinand Magellan to Rajah Humabon's consort in 1521.

In the Spanish period, only the nobility (such as the Principalía) and the rich could afford to have Santo, due to their elaborate ornamentation and design. The procurement and maintenance of Santo is today still considered costly, with the most expensive type of Santo are ones made of Marfil or ivory. From a religious perspective, the practice of owning and maintaining Santo images are often regarded as a mild Catechism for people, especially with regards to the iconographic attributes attached to specific images. A custodian or family of custodians of a Santo are termed Camarero (female: Camarera), which in modern Spanish means "waiting staff".

The most well-known Santo in the Philippines are often Marian titles, such Our Lady of Manaoag and Our Lady of La Naval de Manila, while those of Christ are the Santo Niño de Cebu and the Black Nazarene.

Among wooden Santo images, two distinct types are often noted, the mannequin style, and the fully detailed and painted or detallado and estofado statue. Mannequin-style statues often have removable arms, and movable limbs, sometimes attached to a cage-like frame to build shape for the vestments in a manner known as the bastidor style.

A detallado image is one fully carved and painted, and needs no vestments. The term estofado refers to the dented holes placed on gold or silver foiling on the halos or the body of a statue, creating a reflective effect when placed against light.

The most economical type of santo are made of resin or fibreglass, as they are geared toward mass-production. With wooden santo, the santol (cottonfruit, Sandoricum koetjape) is a favourite as is the wood of Elaeocarpus calomala, while batikulín (Litsea leytensis) wood is highly sought after and more expensive given its resistance to termites.

Ivory is often cited as the best and most expensive material for Santo images. Elephant ivory, especially of African origin, has been banned from sale, distribution, or commercialisation in the Philippines since 1981, with smuggling of ivory goods punishable by law.

For the crowns, haloes, and other metal accessories associated with Santo images, the cheapest type being those made of plastic. Another type is that made of aluminium tin, often gold-plated for a richer effect. The more expensive type is made of solid brass, and pukpók (Tagalog, literally, "hammered") by an artisan. The costliest type of crowns are those made of solid sterling silver or gold, and these were often reserved for wealthy clerics and cathedrals.

The wardrobe of the Santo images are often expensive, such as the ones woven with gold thread, the most expensive type known as inuod (Tagalog, "wormed"), which uses a form of French gold bullion thread used to make embroidered floral patterns on the image's clothing.

Headdresses are also an integral part of a Santo image, often encrusted with Costume jewelry (such as paste and rhinestones) or real precious stones, to symbolise the spiritual wealth of the saint. The most common headdress for images is the Aureola or halo behind or above the head, while regal figures wear an additional Corona. A halo decorating the perimeter of the face, known as a resplendor or rostrillo, is commonly found but not restricted to images of the Virgin Mary. Images of Jesus Christ are identified with the Tres Potencias, a set of three rays protruding from the head at acute angles, and these are never used for any other subject. Triangular haloes are exclusive to rare images of the Holy Trinity, and some saints occasionally bear a Luna or moon-shaped headband.

Other metallic accessories, which depend on the iconographic attributes of the subject, range from a long marshal's baton for some Marian images, to sceptres, globus crucigers (usually for images of the Christ Child), rosaries, wings, flowers, or weapons used in the saint's martyrdom.

Another costly item involved in the maintenance of Santo images is the Carroza or carriage, often used to bear the image during religious processions such as those of the town fiesta, and Holy Week. These often have embossed metal decorations, and cloths forming a skirt to hide the wheels of the carriage, along with scenery for tableaux representing episodes from the Gospels such as the Passion narrative.