The Sanyō Shinkansen (山陽新幹線, San'yō Shinkansen?) is a line of the Japanese Shinkansen high-speed rail network, connecting Shin-Osaka in Osaka with Hakata Station in Fukuoka, the two largest cities in western Japan. Operated by the West Japan Railway Company (JR West), it is a westward continuation of the Tōkaidō Shinkansen and also serves other major cities in between on Honshu and Kyushu islands such as Kobe, Himeji, Okayama, Hiroshima, and Kitakyushu. The Kyushu Shinkansen continues south of Hakata to Kagoshima. The Sanyō Shinkansen connects Hakata with Osaka in two-and-a-half hours, with trains operating at a maximum operating speed of 300 km/h (185 mph), with the following exceptions: east-bound trains have a maximum speed between Himeji and Shin-Kobe of 275 km/h and west-bound trains have a maximum limit of 285 km/h from Shin-Ōsaka to Shin-Kobe and 275 km/h from Shin-Kobe to Nishi-Akashi.[2] Some Nozomi trains operate continuously on Sanyō and Tōkaidō Shinkansen lines, connecting Tokyo and Hakata in five hours.

Train sets operating on the line include:

All stations on the Sanyō Shinkansen are owned and operated by JR West, with the exception of Shin-Osaka which is run by Central Japan Railway Company (JR central). Kodama trains stop at all stations; other services have varying stopping patterns. All trains stop at Shin-Osaka, Shin-Kobe, Okayama, Hiroshima, Kokura, and Hakata. 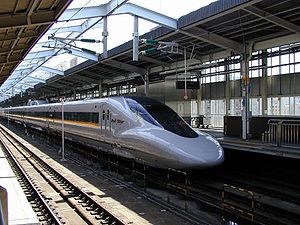 Construction of the Sanyō Shinkansen between Shin-Ōsaka and Okayama was authorized on September 9, 1965, and commenced on March 16, 1967. Construction between Okayama and Hakata commenced on February 10, 1970. The Shin-Ōsaka to Okayama segment opened on March 15, 1972; the remainder of the line opened on March 10, 1975. The first Hikari trains, using 0 series trains, made the Shin-Ōsaka to Hakata run in 3 hours 44 minutes. This was shortened to 2 hours 59 minutes in 1986 with an increase in maximum speed to 220 km/h. 100 series trains, introduced in 1989, boosted maximum speed to 230 km/h and reduced travel time to 2 hours 49 minutes.

From the start of the revised timetable on March 12, 2011, new Mizuho and Sakura inter-running services commenced between Shin-Ōsaka and Kagoshima on the Kyushu Shinkansen using new N700-7000 and N700-8000 series 8-car trainsets. This boosted JR West's market share in the Osaka-Kagoshima passenger market from 13 percent in March 2011 to 35 percent in March 2012. JR West began offering discounted advance purchase fares on this route in July 2013 in an effort to compete for market share with new low-cost airlines such as Peach.[3] With the launch of Mizuho and Sakura services, nearly all of the Hikari services operating solely on the Sanyō Shinkansen (mostly Rail Star services) were discontinued as it was deemed redundant.