From Infogalactic: the planetary knowledge core
Jump to: navigation, search
This article is about the historical term Saracen. For other uses, see Saracen (disambiguation). 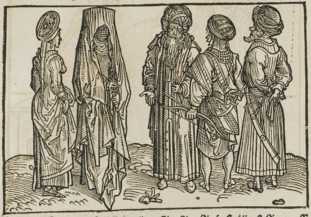 A depiction of Saracens in a 15th-century woodcut

Saracen was a generic term for Muslims widely used among Christian writers in Europe during the later medieval era. The term's meaning evolved during its history. In the early centuries CE, Greek and Latin writings used this term to refer to the people who lived in desert areas in and near the Roman province of Arabia. They were distinguished as a people from others known as Arabs.[1][2] In Europe during the Early Medieval era, the term came to be associated with Arab tribes as well.[3] By the 12th century, "Saracen" had become synonymous with "Muslim" in Medieval Latin literature. Such expansion in the meaning of the term had begun centuries earlier among the Byzantine Romans, as evidenced in documents from the 8th century.[1][4][5] In the Western languages before the 16th century, "Saracen" was commonly used to refer to Muslim Arabs, and the words "Muslim" and "Islam" were generally not used (with a few isolated exceptions).[6]

Ptolemy's Geography (2nd century CE) describes "Sarakene" as a region in the northern Sinai peninsula.[2] Ptolemy also mentions a people called the "Sarakenoi" living in north-western Arabia (near neighbor to the Sinai).[2] Eusebius of Caesarea refers to Saracens in his Ecclesiastical history, in which he narrates an account wherein Dionysius, Bishop of Alexandria, mentions Saracens in a letter while describing the persecution of Christians by the Roman emperor Decius: "Many were, in the Arabian mountain, enslaved by the barbarous 'sarkenoi'."[2] The Historia Augusta also refers to an attack by "Saraceni" on Pescennius Niger's army in Egypt in 193, but provides little information as to identifying them.[7]

Both Hippolytus and Uranius mention three distinct peoples in Arabia during the first half of the third century: the "Saraceni", the "Taeni" and the "Arabes".[2] The "Taeni", later identified with the Arabic-speaking people called "Tayy", were located around the Khaybar oasis north of Medina, and also in an area stretching up to the Euphrates River. The "Saraceni" were placed north of them.[2] These Saracens, located in the northern Hejaz, were described as people with a certain military ability who were opponents of the Roman Empire and who were classified by the Romans as barbarians.[2]

The Saracens are described as forming the "equites" (heavy cavalry) from Phoenicia and Thamud.[8] In one document the defeated enemies of Diocletian's campaign in the Syrian desert are described as Saracens. Other 4th century military reports make no mention of Arabs but refer to as Saracens groups ranging as far east as Mesopotamia (modern Iraq) that were involved in battles on both the Persian and Roman sides.[8][9] The Saracens were named in the Roman administrative document Notitia dignitatum—dating from the time of Theodosius I in the 4th century—as comprising distinctive units in the Roman army. They were distinguished in the document from Arabs and Iiluturaens.[8] 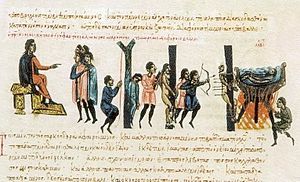 Beginning no later than the early fifth century, Christian writers began to equate Saracens with Arabs. Saracens were associated with Ishmaelites (descendants of Abraham’s older son Ishmael) in some strands of Jewish, Christian, and Islamic genealogical thinking. The writings of Jerome (d. 420) are the earliest known version of the claim that Ishmaelites chose to be called Saracens in order to identify with Abraham’s “free” wife Sarah, rather than as Hagarenes, which would have highlighted their association with Abraham’s “slave woman” Hagar.[10] This claim was popular during the Middle Ages, but derives more from Paul’s allegory in the New Testament letter to the Galatians than from historical data.[clarification needed] The name "Saracen" was not indigenous among the populations so described, but was applied to them by Greco-Roman historians based on Greek place names.[11]

As the Middle Ages progressed, usage of the term in the Latin West change, but its connotation remained negative, associated with opponents of Christianity, and its exact definition is unclear.[12] In an 8th-century polemical work, John of Damascus criticized the Saracens as followers of a false prophet and "forerunner[s] to the Antichrist."[13]

By the 12th century, Medieval Europeans had more specific conceptions of Islam, and used the term "Saracen" as an ethnic and religious marker.[1][14] In some Medieval literature, Saracens—that is, Muslims—were described as black-skinned, while Christians were lighter-skinned. An example is in The King of Tars, a medieval romance.[15][16] The Song of Roland, an Old French 11th-century heroic poem, refers to the black skin of Saracens as their only exotic feature.[17]

In his historical chronicle [18] titled Chronicles of Ash-Sham, the Damascan writer Bin Kannan (محمد بن كَنّان الصالحي) uses the term "sarkan" to mean "travel on a military mission to" from the Near East to parts of Southern Europe which were under Ottoman Empire rule particularly Cyprus and Rhodes.