Because of difficulties with new production radar equipment, the radar station, initially known as Schuylerville, NY, did not open until 1 February 1952 when the 656th Aircraft Control and Warning Squadron activated with AN/FPS-3 and AN/FPS-5 radars and assumed the coverage from the temporary "Lashup" site at Schenectady, NY (L-7), and initially the station functioned as a Ground-Control Intercept (GCI) and warning station. As a GCI station, the squadron's role was to guide interceptor aircraft toward unidentified intruders picked up on the unit's radar scopes. The station was redesignated as Saratoga Springs AFS on 1 December 1953.

Saratoga Springs AFS was one of the first to receive an AN/FPS-20 search radar in the spring of 1957. By 1958 the original radars were gone, and operations continued with an AN/FPS-20 and a pair of AN/FPS-6 height-finder radars. During 1958 Saratoga Springs AFS joined the Semi Automatic Ground Environment (SAGE) system, initially feeding data to DC-02 at Stewart AFB, New York. After joining, the squadron was re-designated as the 656th Radar Squadron (SAGE) on 15 December 1958. The radar squadron provided information 24/7 the SAGE Direction Center where it was analyzed to determine range, direction altitude speed and whether or not aircraft were friendly or hostile.

Over the years, the equipment at the station was upgraded or modified to improve the efficiency and accuracy of the information gathered by the radars. The site conducted routine operations until 1976 when it was announced the station would be closed as a result of the unlikelihood of an air attack on the Continental United States. The 656th Radar Squadron was inactivated on 30 June 1977. The FAA continued using the AN/FPS-27 tower to house beacon (SIF) only for several years after the USAF ceased radar operations. 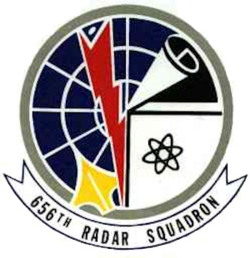 Emblem of the 656th Radar Squadron