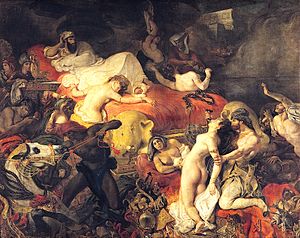 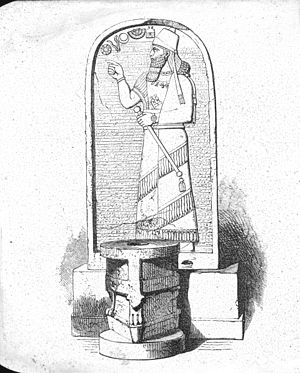 The name is probably a corruption of Ashurbanipal, the last great Assyrian emperor-king of the Assyrian Empire, but Sardanapalus as described by Diodorus bears little relationship with what is known of that king, who in fact was a militarily powerful, highly efficient and scholarly ruler, presiding over the largest empire the world had yet seen. Ashurbanipal died of natural causes in 627 BC. Greek legend holds that Sardanapalus was the son of Anakyndaraxes, however it is known that Ashurbanipal was the son of the Assyrian king Esarhaddon.

The legendary decadence of Sardanapalus later became a theme in literature and art, especially in the Romantic era.

Diodorus says that Sardanapalus exceeded all previous rulers in sloth and luxury. He spent his whole life in self-indulgence. He dressed in women's clothes and wore make-up. He had many concubines, female and male. He wrote his own epitaph, which stated that physical gratification is the only purpose of life. His lifestyle caused dissatisfaction within the Assyrian empire, allowing a conspiracy against him to develop led by "Arbaces". An alliance of Medes, Persians and Babylonians challenged the Assyrians. Sardanapalus stirred himself to action and routed the rebels several times in battle, but failed to crush them. Believing he had defeated the rebels, Sardanapalus returned to his decadent lifestyle, ordering sacrifices and celebrations. But the rebels were reinforced by new troops from Bactria. Sardanapalus's troops were surprised during their partying, and were routed.

Sardanapalus returned to Nineveh to defend his capital, while his army was placed under the command of his brother-in-law, who was soon defeated and killed. Having sent his family to safety, Sardanapalus prepared to hold Nineveh. He managed to withstand a long siege, but eventually heavy rains caused the Tigris to overflow, leading to the collapse of one of the defensive walls. To avoid falling into the hand of his enemies, Sardanapalus had a huge funeral pyre created for himself on which were piled "all his gold, silver and royal apparel". He had his eunuchs and concubines boxed in inside the pyre, burning himself and them to death.[1]

The Greek writer Choerilus of Iasus composed an epitaph on Sardanapalus, which he claimed to have been translated from the Chaldean.[2]

There is no king named Sardanapalus attested in the Assyrian King List. Parts of the story of Sardanapalus seem to be related to some degree to events in the later years of the Assyrian Empire, involving conflict between the Assyrian king Ashurbanipal and his brother Shamash-shum-ukin, who controlled Babylon as a vassal, on behalf of his brother. While Sardanapalus has been identified with Ashurbanipal,[3] his alleged death in the flames of his palace is closer to that of his brother Shamash-shum-ukkin, who became infused with Babylonian nationalism and formed an alliance of Babylonians, Chaldeans, Elamites, Arabs and Suteans against his master in an attempt to transfer the seat of the vast empire from Nineveh to Babylon.

There is no evidence from Mesopotamia that either Ashurbanipal or Shamash-shum-ukin led hedonistic lifestyles, were homosexual or transvestites. Both appear to have been strong, disciplined, serious and ambitious rulers, and Ashurbanipal was known to be a literate and scholarly king with an interest in Mathematics, Astronomy, Astrology, History, Zoology and Botany.[4]

It was Shamash-shum-ukin in Babylon who was besieged and defeated, and his allies crushed, not Ashurbanipal in Nineveh. After the former's defeat in 648 BC, an inscription of Ashurbanipal's records, "they threw down Shamash-shum-ukkin, enemy brother who attacked me, into the raging conflagration".[5]

The actual Fall of Nineveh occurred in 612 BC after Assyria had been greatly weakened by a bitter series of internal civil wars between rival claimants to the throne. Its former subjects took advantage of these events and freed themselves from the Assyrian yoke. Assyria was attacked in 616 BC by allied forces of Medes, Scythians, Babylonians, Chaldeans, Persians, Cimmerians and Elamites. Nineveh was besieged and sacked in 612 BC. Ashurbanipal's son Sin-shar-ishkun (the third of four kings to rule after Ashurbanipal) was then ruling as king of Assyria. He was probably killed defending his city in the sack, though records are fragmentary. Ashur-uballit II succeeded him as the last king of an independent Assyria, ruling from Harran, the last capital of Assyria until 605 BC. Assyria survived as an occupied province and geo-political entity until it was dissolved after the Arab Islamic conquest of Mesopotamia in the 7th century AD. The area is still inhabited by a now Christian and still Eastern Aramaic speaking indigenous Assyrian minority today.

Recently Sardanapalus has been identified with Ashur da’in apla, the son of Shalmaneser III, who led a rebellion against his father.[6]

On the eve of the battle of Issus (333 BC), Alexander's biographers say, Alexander the Great was shown what the locals purported to be the tomb of Sardanapalus at Anchialus in Cilicia, with a relief carving of the king clapping his hands over his head and an inscription that the locals translated for him as "Sardanapalus, son of Anakyndaraxes, built Anchialus and Tarsus in a single day; stranger, eat, drink and make love, as other human things are not worth this" (signifying the clap of the hands).[7] Historically, there is no record of any Assyrian king dying or being buried in Cilicia.

In the introductory pages of Book I of Aristotle's Nicomachean Ethics, those who (erroneously, according to Aristotle) equate the good life with the life of brute pleasure are likened to Sardanapalus.

E. H. Coleridge, in his notes on the works of Byron, states, "It is hardly necessary to remind the modern reader that the Sardanapalus of history is an unverified if not an unverifiable personage... The character which Ctesias depicted or invented, an effeminate debauchee, sunk in luxury and sloth, who at the last was driven to take up arms, and, after a prolonged but ineffectual resistance, avoided capture by suicide, cannot be identified".[citation needed]

Hector Berlioz, the 19th-century French Romantic composer, wrote a very early cantata on the subject of the death of Sardanapalus. It was his fourth and finally successful attempt in the Prix de Rome competition, run by the Paris Conservatoire. Only a fragment of the score survives.

Franz Liszt began an (uncompleted) opera on the subject, Sardanapale.