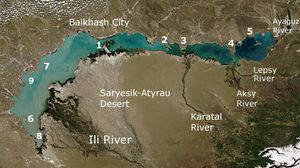 The Saryesik Atyrau Desert stretches for about 400 km south of Lake Balkhash in eastern Kazakhstan. It is a sand desert, relatively ecologically healthy with little erosion. There are numerous small lakes and ponds in the desert, as well as occasional grasslands, that support a varied animal and bird population.

The Saryesik-Atyrau Desert borders the Ili River delta in the west, which is home to a large wild boar population. The wild boar are mainly found in the reed beds, but enter the fringes of the desert. Here they are often found around karabarak bushes. The desert itself is home to goitered gazelles and a small population (about 150) of the Saiga antelope. The Asian wild ass (Equus hemionus kulan) however, is extinct in the area.[1]